TheDonald
Communities Topics Log In Sign Up
Sign In
Hot
All Posts
Settings
Win uses cookies, which are essential for the site to function. We don't want your data, nor do we share it with anyone. I accept.
DEFAULT COMMUNITIES • All General AskWin Funny Technology Animals Sports Gaming DIY Health Positive Privacy
2572 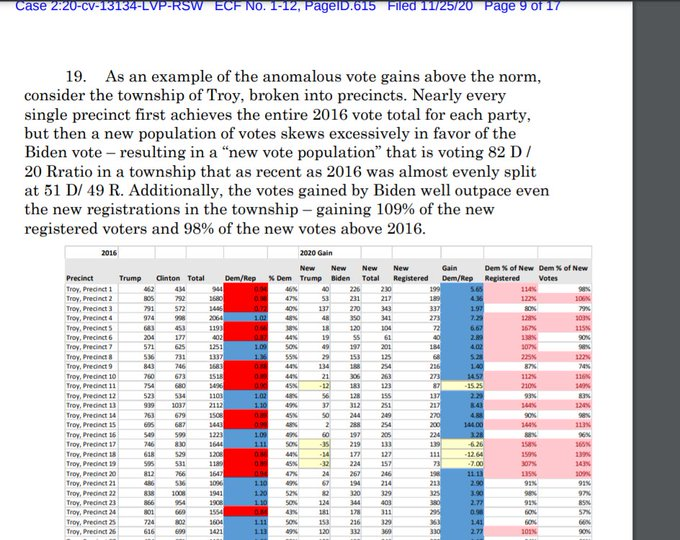 109% of all new registered voters.

MSM: Nothing to see here folks

Listen fat, excitement for joe was so high, even the palmist voted for him

The 2 D 20 R ratio of new votes is probably what really happened and they just added 4x the Trump vote on top of it.

They did this on purpose. I fiddled my high school elections. My EGO made it such that if you added up all the totals it was more than 100%. Just because I had the power to do so. Its exactly what you are seeing here.

Damn! We can’t allow this.

Oops. Had to push the red button a few too many times.

Another day another piece of evidence proving the fraud.

Very blurry screenshot. Can you save to .png

Any idea of every county in the country is begin parsed like this? I'd love to see how it shakes out nation wide...

I don't understand how this data was calculated and what the columns mean.

Can we explain what the columns means and how they are calculated? Why is "New Total" lower than "New Trump + New Biden"?

This is the biggest problems I find in this whole document, they say a lot of things and then they say "as demonstrated by the following chart", and then no explanation. Well sorry but no, it doesn't demonstrate anything without explanation.

It's because the 3rd party data isn't shown. For instance, the sum of the trump and Clinton numbers from 2016 doesn't equal the total because 3rd party isn't listed. I would agree it is a little tough to follow.

A couple weeks ago, I looked at Wisconsin and Michigan. I applied the distributions from 2016 to the new voters and increased turnout, the only way I could get to where Biden is vote wise is if I applied the entire 3rd party difference between 2016 and 2020 to Biden (6-some percent vs 1-some percent if I remember correctly). That was pretty dubious to me.

Makes sense, thanks for the clarification!

I assume this is Michigan, but again, if so the wording is not right. This has to be the CITY of Troy, largest in Oakland county (just north of Wayne County/Detroit). Troy Township is in west Michigan, and has less than 300 people.

If it is the city of Troy, certainly something is rotten. The mayor is a Republican, but at the state level Dems flipped the house and senate seat last fall after long serving Republicans, and has a Dem in the US house since 2018, after being an R seat before, but he was a Rino/non-Trump supporter who "retired".

These are the clearest signs of fraud. You’d have to be a complete idiot to not see how more votes than voters is clearly fraud. Turnout in the 80’s they can brush away with bogus excuses, but 100%+ turnout just can’t happen.