TheDonald
Communities Topics Log In Sign Up
Sign In
Hot
All Posts
Settings
Win uses cookies, which are essential for the site to function. We don't want your data, nor do we share it with anyone. I accept.
DEFAULT COMMUNITIES • All General AskWin Funny Technology Animals Sports Gaming DIY Health Positive Privacy
778 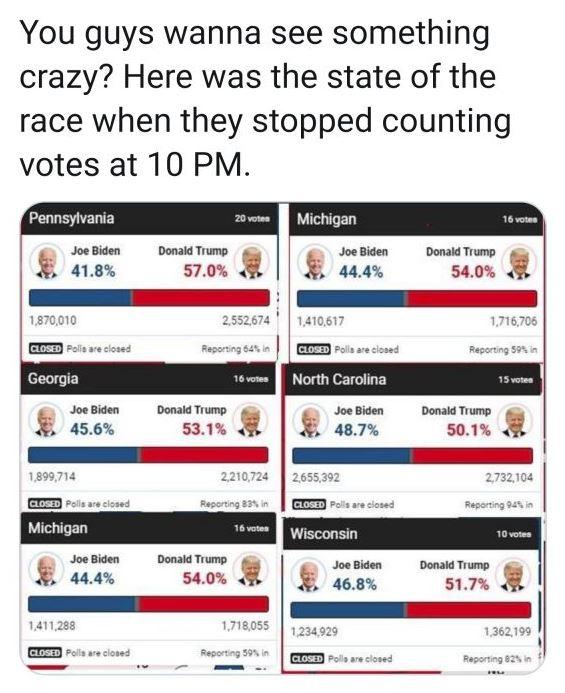 This isn't necessarily true if your overall population consists of several heterogeneous populations.

To expand on the example in the wiki link:

But if you sampled all of the d6s first and then all of the d10s then your average would initially trend towards 3.5 and then gradually shift up towards 4.5 as the d10 sample builds up.

Trump was expected to be leading after the election day in person votes were cast, but that Biden would lead in mail in votes that got counted afterwards in most cases.

That said, I don't dispute the claim that there's fraudulent shit going on here.

This is why they kept "finding votes" after the count stoppage. They had no more legitimate votes to count. Anything past midnight eastern time is fraudulent garbage. You can even see it graphed out on here on many posts.

The moment at which it is plain and clear that the vote "tide" would not change happened at approximately 10pm Eastern. It was OVER.

I thought mail in votes were actually counted first in most cases. Most states had earlier mail-in deadlines before voting day. But when Trump is winning handsomely then in the middle of the night there was a miraculous spike then the left pretends there's nothing usual about it and tries to stop all investigation into it, it's pretty suspicious. Plus by now, there's lots of examples of fraud we already know of.

Indeed, they were absolutely counted first

Which is what makes all this fraud so damn stupidly obvious.

I agree with you, just making the point that seeing a change in average isn't necessarily a sign of fraud.

These totals include the previous “ mail in ballots” that were preselected for Biden. They didn’t think they would need to recheat.

North Carolina was the closest of them, and it did not flip!

I think they were planning to flip it, but with all the eyes opened, they had to deep six it, as they did not need it anymore.

And to think of bidens votes even then were way over inflated as the .25 percent flip. That's a half million votes on 2 million thay should have gone to trump that Biden got. In Michigan that gives trump 65 percent t of the vote once again reflecting the true trump base. My estimates have trump at 67 to 72 percent of the vote 26 for Biden

We've known this since the 3rd.

Not only did the libtards cheat they KNEW that Trump would win in a fair election and just couldn't let him have his glory.

I have voted for decades and the only president that I can compare him to is Reagan.

Trump will have many books written about him and this glorious time that we are living in.