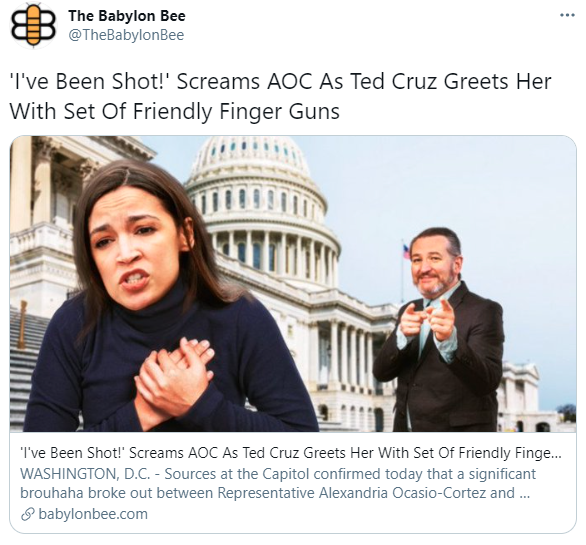 I was pretty shocked when Cruz retweeted her and said he at agreed.. I was disgusted at her reply.

I think Cruz really enjoys that she hates him so much. Saying that he agreed with her specifically was to get under her skin. And boy did it work.

I hope he hit her right in her imaginary heart because she can't possibly have one being that evil.

He is very stoic in his attacks and thus makes his enemies seethe.

she secretly crushes on Ted....and Trump

They make her wet. 💦

Steve Scalise is not amused.

I hope he tweets this Babylon bee picture at her

She would claim it a threat in her life then.

This would be even better.

She couldn't be a good politician for one fucking second. Had to let the commie out once again.

I know. :D We went from "We have unity!" back to the normal bickering really quickly.

Well, it wouldn't be first time AOC was fingerbanged.

And not from her cuck bf

Why are there men who think AOC's face is attractive? That puzzles me more than the fact that there are people who vote for her.

all things being relative, look at her competition on the left.

Easy: Bang AOC. Kill Kamala. Marry the tranny minister of health because odds are that he commits suicide any day now.

I have never seen anyone win this game as hard as you just did.

You'd have to attend a state where it's legal for two men to marry.

Christ.. I wish I could purge my memories from that creature.
Anyone willing to call that a woman is directly insulting actual women.

Cmon dude even Jigsaw came up with more fair games than that.

Fuck the tranny minister, put a ring on that thing, and then shoot it to death along with myself. AOC and Kamala can fuck each other and kill themselves for all I care.

She has her moments/angles. The donkey smile plus British-style teeth are a bit much though

I have no clue. I find her repulsive.

That said, there is a "hot latina" meme that seems to be embedded in the minds of some portion of the population. Mostly genx and boomers from what I've seen (that's purely anecdotal of course, though an actual study on that would be hilarious). No idea where that came from. Some movie in the 60s or 70s probably.

I don't know. That video from college where she's dancing Breakfast Club style was pretty hot.

The way she dresses now is definitely turning her ugly. That's what leftism does to women.

Why can I picture that reeee in my head... lol.

That Cruz picture is amazing

"I was literally almost killed!"

"They're still after me, I live in fear every day!"

If she's worried now, she's going to be terrified in a few months.

He is the Zodiac.

"I just had a nice meal at [restaurant], ready for some work!" - Ted Cruz

"Oh my gosh, Ted Cruz is organizing a white supremacist terrorist insurrectionist rally at [restaurant] and by work he means killing us all non-whites!" - AOC

This has been their logic since the 6th (or should I say 1/6 Pearl Harbor harder?) to claim that their fellow congressmen are directing the troops to kill them.

The Babylon Bee is what every comedian should be today.

Remember comedy? Remember comedians?.... I mean, when they used to push against political propaganda and make you laugh? Before they became cucks reinforcing the propaganda

Next week AOC will say some dumb shit like that. Lowering expectations once again.

She is aging pretty bad.

In all seriousness, he should sue her.

We have the best fake news.

"Cruz tried to have me murdered."

The Babylon Bee has been getting real close with the truth in past articles, almost prophetic. Like BLM nominated for the Nobel Peace Prize. That means awards don't mean shit anymore!

When I was working for TJ's I came out of the back room, singing along to a Sinatra tune that was playing and did finger guns to a co-worker along with the tune. (I think it was My Way or something along those lines)

A week later I get taken in the back room for a discussion on a HR complaint, about how said co-worker no longer feels safe working with me because of the finger guns. My response of "We all know that she's batshit crazy, and this is stupid." held no water. I got transferred and a black mark on my name for the next store, which by the time the rumor mill was done with it turned into "this guy pulled a gun on someone in the middle of the store!"

Said it before, fuck Trader Joe's and fuck their HR department. Eventually they had a "reorg" on people in line for management, and strangely all the straight white males were knocked out of the running. (Except for some SWM that had shown the correct attitude of wokeness.)

Shot through the heart, and Ted's to blame

Hat-tip to the original:

That made me spit my coffee out.

She's just a wuss.She needs to cry me a river poor baby. Run home to Momma and cry to Daddy poor thing. If it's that bad, maybe you need to stay home. You're not mature enough for public office.

Should show her dropping a skateboard as she clutches her fatal wound.

2021: The Babylon Bee is the news and CNN is the parody

I’m not sure who’s worse, those willingly in the cabal, or their dupes. One can almost admire insidious genius, but nobody, not even cabalists respects a useful idiot.

Someone should start a book on how long it will be until the FBI or some other Biden organ goes after them.

Pretty sure If the Zodiac Killer wanted you dead, you'd be dead.

They ran several articles mocking Stop The Steal. That's when I unsubscribed.
Infrastructure for integrity of government, elections, society: Wiki, Chat, and More.

Any pointer who needs ten fingers and assault hands with that kind of capacity isn't much of a pointer.

They're a comic gem!

I love that they can inject some humor in these terrible times.

Shit like this is why she will always be a clown. She was always a retard. But now she's a retarded clown. If she had one genuine bone in her body, if she actually wanted to help people and not just grandstand, she would have taken the opportunity to propose solutions, and use Cruz's public agreement there to hold his feet to the fire and pressure him to cooperate.

Edit: naturally, when I say "shit like this" I am referring to the twitter exchange that inspired this article not the satire itself.