TheDonald
Communities Topics Log In Sign Up
Sign In
Hot
All Posts
Settings
Win uses cookies, which are essential for the site to function. We don't want your data, nor do we share it with anyone. I accept.
DEFAULT COMMUNITIES • All General AskWin Funny Technology Animals Sports Gaming DIY Health Positive Privacy
3650 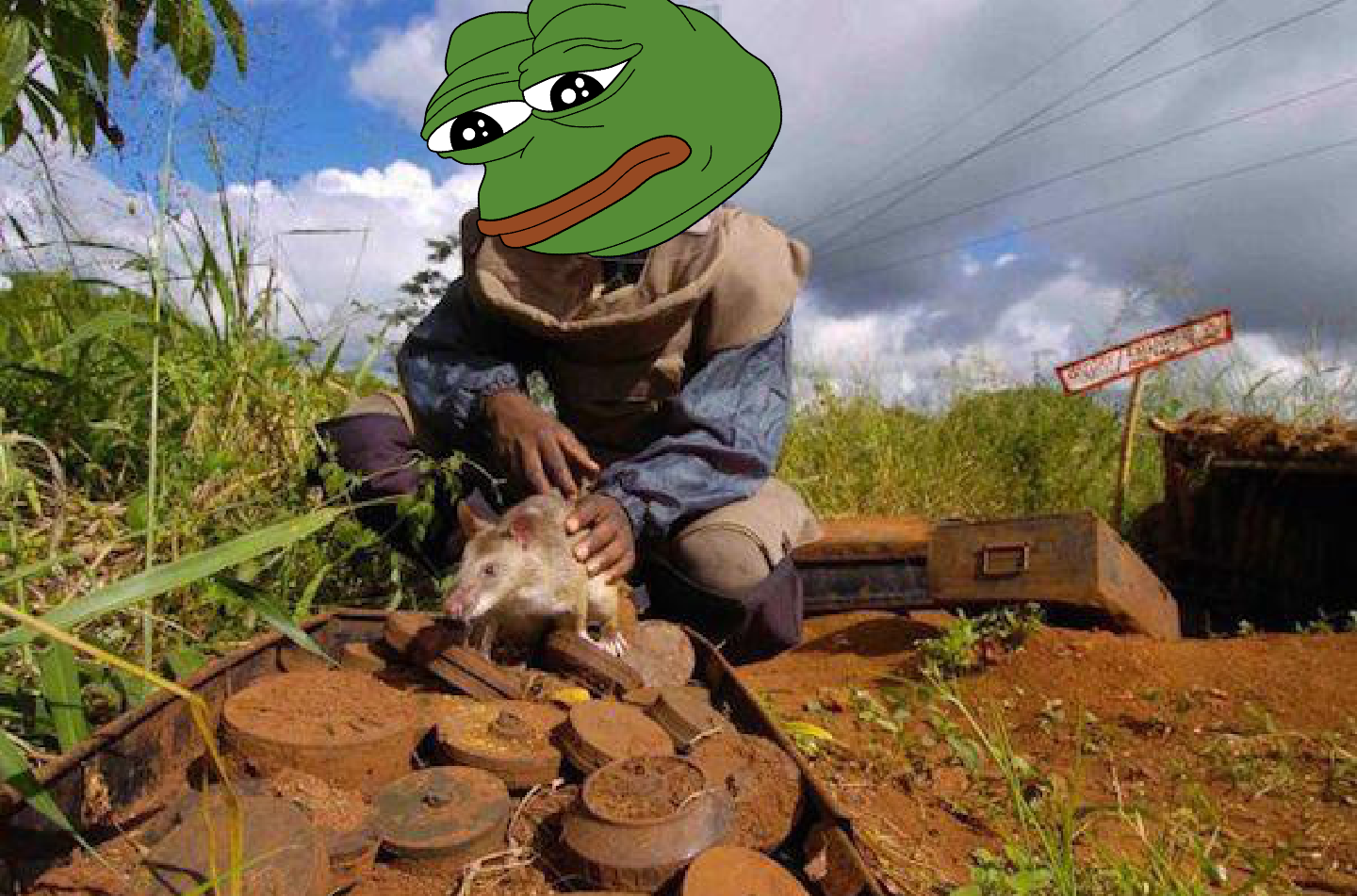 In fairness, APOPO is a worthwhile group.

Did I just read that the rats detect landmines and tuberculosis

I bet since this lady can smell Parkinson’s and Alzheimer’s, it would be possible to train the rats to do that too

I can smell who in my family has Alzheimer's too, pro tip:

It's the one who never remembers to wipe his ass

I don't think the main reason for using rats to find mines isn't just their sense of smell(pretty sure other animals do that better, in general (hounds, bears, etc), though rats may be better at certain compounds in the case of tuberculosis)

It is the fact that they are lightweight and lighfooted(so they are less likely to set mines off, and probably more expendable).

The best animal to be trained to find landmines is a Democrat, because in case a landmine goes off, the trainers don't become as attached to the Democrats, so it's better for morale. Democrats aren't as easy to train as rats, though. Not quite as intelligent.

thanks for making me bust out laughing😎😎😎😎😎. I have been so pissed off the last couple of months...

It is the fact that they are lightweight and light footed(so they are less likely to set mines off, and probably more expendable).

Not really less expendable, it still takes a while to train them properly. But they require less space to house, and take less food & water. A single equipped trailer can house dozens of trained rats, with both food and water for months of operation. The same trailer could house only 1 or 2 dogs.

I just also sort of figured that while dogs are in most places, rats are EVERYWHERE so thats why they picked them

Pretty sure that it isn't common brown rats.

I think they only use these

Only native to Africa, though they are apparently invasive in the Florida Keys

Apparently also occasionally escape from being pets in the southern states, but doesn't seem to be significant breeding population.

You are simply unaware of a commonly known fact

The pede was simply sharing. Whether it’s true or not it’s up to the person reading (we have brains, you know?)

No need to sound harsh

You can't smell an illness unless it creates an external bodily change.

Why is it hard to believe that a disease creates a subtle external bodily change?

If I remember right dolphins

If I remember right dolphins raped my boy.

"BWAAAAHHHHHH!!! Stop talkin' about that, dang it! If you say one more word, I'm gonna kick your ass!"

It's an honest living. Dogs can detect terminal cancer.

Probably more accurately than some doctors.

How hard is it for you to duckduckgo 'dogs detect cancer'

The guy’s being rude, but it is true it’s not on him to prove a point for the other side.

That doesn't apply here. Your own ignorance and laziness don't entitle you to get facts of common knowledge presented to you on a silver plate whenever you demand them.

Dogs detecting cancer is not common knowledge. It does apply.

No, it's up to him to prove we're wrong.

No, people asserting the fact that dogs can detect cancer are making the assertion, not anyone else. The burden of proof is on them.

"I don't understand it, so everyone is wrong." You are a fucking retard.

No, Covid, if you gerbil it up your ass, it can sniff out COVID... You know you have it, if it backs out on its own and you don't gotta go to the ER. My wife's BF told me that.

It's also 1000 percent more effective that Chinese asshole saw test, but it goes further than 2 inches. Also, only baby rats unless you have alternative experience

I was coming in to say exactly this; I've donated to them in the past and they're amazing! And the rats are so interesting, I'd never seen ones so large before.

You must not be from a poor country... I remember I was 5 years old and our cat caught a rat almost as big as himself. It was huge! I'm 46 now but never forgot how big it was

Wow, that sounds kinda amazing, And an impressive feat by the cat too!

It’s so horrible here 😂😂 there are magaers around so it could be worse, but my God. Trying so hard not to flee to a red state!

Usernames can contain slashes? What a world we live in!

Population density probably has more to do with how common rats are. They seem to be plentiful enough in most big cities.

Not sure if being in a poor country would make them bigger.

Seem to get big enough in well off Sweden

Even pet rats get pretty huge though. Particularly the males. The one in the picture looks to have white and brown patches... You'd usually expect that on a hamster. That's a domestic rat.

Must not have ever been to NYC. They got ‘em big as Rottweilers.

I have actually! Boston too, just haven’t seen the giant ass rats yet 😅

They are SO cool! I have a heart for rats, have had them as pets for years, so this is just awesome!

Never had one as a pet, but I did have hamsters growing up. They weren't exactly the smartest rodents, but they were adorable and they knew that you looked out for them. Especially when you gave them Honey Nut Cherrios.

Mine got killed by the cat. Poor bastard stood no chance, escaped from his cage.

My cat got my dwarf hamster when I was a kid...

The worst part was the blood, the cat looked like he had just ate an entire animal.

Rats are like hamsters, just much bigger and smarter.

Hamsters have softer coats though.

I had two, in high school. My sister had a rat, one of the "siamese" breeds she paid a lot of money for. Seemed fun, so I got two females from the pet store. Mine were fun until the first night, when they decided to have Wrestlemania at 3am on a school night. crashsqueakcrashsqueal*.

They both died within two months of cancer. Pet store rats are so inbred (raised as snake food) they have very short life expectancies. It's a shame, as they're very intelligent. But they're pests and disease carriers and wreck farms and homes, in the wild. But pet rats can be a lot of fun.

I discovered my passion...er...addiction later, with fish tanks, and reef fish.

It's rewarding, and expensive. And heartbreaking. My last reef tank got wiped out by a rock with polyps that had been properly quarantined and acclimated. That's the breaks - and how you kill several hundred dollars of live coral.

I miss having seahorses, my favorite, but I can't right now. Soon.

Many fish over on animals.win

Those rats are adorable!

don't forget to register them to vote before they splode

You could move to Australia. We refab mining trucks (mainly for companies in coal mines) and our business in Australia has been BOOMING this past year. The only downside is you'll have to get used to working upside down, and you won't be in the US

For those of you have lost your job to Biden I'm sorry and I wish the best for you. Unlike the left, we actually care about you guys

Happy to send our Victorian Thornbury and Brunswick "look at me with my fringe I'm an individual that looks the same as everyone else here" lefties for some based refupedes.

I train rats to find land mines, and my wife is a mall Santa.. our budget is 1.3 mil.

Is that the DC species?

I know I am supposed to laugh but I can't. I feel angry, sad, and desperate. I hope you will find a job soon. Take good care of yourself! With Sincere Regards.

Thank God be Happy Bigot You Get 2 Free Rainbow Flags to Support Queer Year.. Every Year is Queer Year in Biden’s America

Those rats and the people digging up those old mines are all incredible heroes.

A side note, working dogs in the US Army are usually Staff Sergeants while their handlers are Sergeants. That's so if the animal is mistreated (I'm sure other reasons too) by it's handler they get into much more trouble.

When is Kuntmala making crack addict Hunter Biden do that at 2$ an hour for his rehab sentence?

But you have to work in a Chinese factory for $2/hour.

Make sure to put those mines to good use. In MINEcraft of course.

what is up dale gribble... or is thta rusty shackelford.

I wouldn't wanna train an animal and get attached to it, just to send it to something that's gonna get it killed.

Aren’t rats too light to set off land mines? I’d imagine a land mine would be pretty ineffective if it could be detonated by a rodent.

Bro, landmines sometimes just detonate on their own. It's not like they are safety devices with all kinds of protections. They are made to blow up and kill.

I thought this was a joke til I saw the article. Maybe we should teach rats to code. Where the fuck is PETA?

You could always learn to code.

I would put all those demoKKKrats RATS and the RINOs to detect mines, in the end those RATS that I mentioned are worth nothing and are useless

Thats Kameltoe to you Mr....

I used to be a coal miner like you. Then Cumala got on her knees.

How much are they paying per land mine? Where do I go to find them? How do I return them, FedEX, UPS? Kamala please be specific! I need a job!