TheDonald
Communities Topics Log In Sign Up
Sign In
Hot
All Posts
Settings
Win uses cookies, which are essential for the site to function. We don't want your data, nor do we share it with anyone. I accept.
DEFAULT COMMUNITIES • All General AskWin Funny Technology Animals Sports Gaming DIY Health Positive Privacy
1306 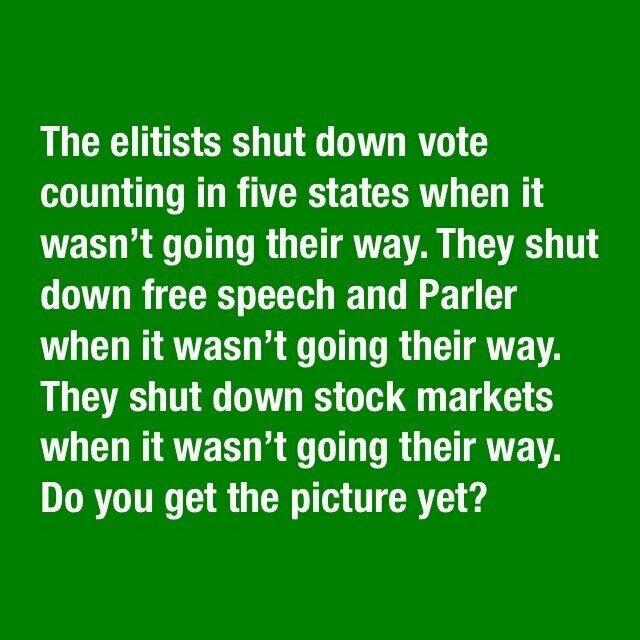 The executive behind the Parler shutdown is the new CEO of Amazon. Let that sink in.

Sooner or later they're going to take something too precious from the wrong guy and he will show everyone else how effective one man can be even if they mow him down.

This happens more often then you hear about.. Some poor down on his luck guy get persecuted by the system till he goes off.. Several mall shootings , the port authority with a shotgun, several places of ex employment, standoffs at several homes.. If they start pushing hard against patriot groups I imagine there will be shootouts between FBI agents and them when they start doing no knock raids and get caught flat footed by someone who is prepared and mows them down.. This is why I can't see any kind of nationwide confiscation or crackdown happening..

Yeah, it makes you wonder about some of those so called 'insane mass shooters.'

I thought that link was going to be the story of the killdozer.

World war 1, the largest to its date fought by countries across the world. Millions killed, and the world remapped.

It was started by 1 man.

Unless literally everybody stand up and go out and protest.. not much will change.

They also shut down the ENTIRE US ECONOMY when things weren't going their way.....

Exactly. In February, Schiffty Adam Schitt was talking up his plans to start a second impeachment, and then that was totally knocked off the front page when the media decided "We gotta go from saying Trump is overreacting to the virus, to saying he's underreacting!!"

Killed all our people in nursing homes.

From history when these kinds of governments rise up. Nothing, nothing will get people to rise up. Everyone will look to themselves and hope they are not targeted. Because fear rules the average American not hope.

Want to get people to wake up, get them to unplug from this shit for a couple of days. To realize what it is they really want to stand for in life. Then you will see an actual movement of people who are unwilling to back down. unwilling to compromise to people seeking to undermine their goals in life. Once people learn to suppress that fear, ignore the establishments divisinaory tactics, and stand up for what they hope the future to be. Then you will see a movement.

Since 2016. No TV (Barely any media, no Amazon, no Netflix, no Cable, etc) - I may occasionally grab a local paper (and I mean local) and see what is generally going on. Otherwise there are barely any televisions shows that I watch, certainly no news, not even OAN, no disrespect to them, and certainly no subscriptions 'programming' service. If there is anything, I acquire it in a way that the British in 1600 would be happy with in Trinidad and Tobago (Does it still have flaws, yes, it's still consuming an element of 'programming' but it is preferable given the limitations I have imposed).

No Social Media - I am however, unfortunately on Facebook, predominantly because trying to communicate with others ('normies') is otherwise outright impossible - I do however use custom-code to obliterate everything about Facebook to the extent that it just displays the messenger. The account itself was created with a lot of 'Dummies' that hold no personal information of any type and don't even particularly redirect correctly, if the account becomes compromised, i'll cut my losses (because recovery would be convoluted). My friends know (that I actually see in person) that they are not to upload ANY content of me in any way to that site. I don't get updated by ANYONE I have as a 'friend' on the site (everyone is moved to an acquaintance) and some people outright have not been accepted because there is no point; if I don't need to speak to you it doesn't serve a purpose; it's just data harvesting. So am I perfect? No, I'm flawed, but you don't refuse to use a Tank because you prefer the feel of a bayonet. You move with the times, and compromise in your adaptations.

Go Outside - That doesn't necessarily mean 'exercise' that literally means go outside (gee I wonder why these lockdowns are still attempted to be imposed...) you can talk with people about certain things. Sow your seeds now. You don't know when a plague will destroy your harvest.

Take the occasional dose of 'hopium' but spend your days ensuring you are prepared; plan for the worst - it isn't anything that otherwise can't be changed if it 'is never going to happen'. Best of all, communicate with people in person, old fashioned way, hand-written and delivered letters for example (They're quite nice to receive, and a good way of spreading news).

I we are still denied ELECTION TRUTH, if Biden is still pretending to be POTUS, if the criminals in DC have not been arrested...

Then I propose we have a NATIONAL GUN SHOW on the LAWN around the Washington Monument. We can swap stories, show our collections and have a jolly ole time with our fellow legal gun owners, proudly demonstrating our Constitutional Rights.

When are we going to stand up anyway?

Gonna wait until they're dragging us to a camp, locking you up for wrongthink? It'll be too late.

States are realizing they have borders and Constitutions and the powers that go with that..

What sort of pushback are we looking for? You can't rally around a negative.

The elitists need One Hundred and Tenned the fuck out.

Waiting for someone with some clout to kick things off.

Until then, I'll munch my popcorn and watch.

The system is too powerful for average citizens to start things off, even if there's hundreds of thousands of them. This is proven by the capitol hill march.

A whole state and it's government body need to secede. A 5 star general needs to bring his whole command to bear on election fraud and arresting the perpetrators. A Fleet Admiral would need to blockade DC and force action.

50, 100, not even 500000 citizens with their rifles are going to be able to do anything. The whole power structure needs to shift, so that a good chunk of the top of the pyramid isn't towing the cabal line anymore and wants to try for something else.

Outside of that, we'll just get honeypotted, psyopped and picked off one at a time by the "authorities".

It is a slow process and I see several States already pushing and preparing for the D.C. overreach and unconstitutional laws and acts that they know will be coming.. Second Amendment free zones where Federal laws will no longer be obeyed or enforced.. This is already building in 25 States and several States have started pushing back on social media censorship.. These companies might be forced to allow it inside many States borders or find they will not be allowed to do business in those States and or be heavily fined..

March 5th. If Trump is not President of the United States of America, the entire Election Fraudster Mafioso is not arrested, all the PEDOS are not locked up, and the world is not liberated from the DeepState/NWO...

Then I will do whatever is needed to make all the above become factual and true.

Nobody will fight back while they still have it cushy. Take away electricity, Internet, and come to get us for camps and then see the pushback. Too late.

>What’s It Going To Take

A lot more. Study history a bit, maybe you'll understand. If you are still asking silly questions like this, you ought to sit back and watch others do the heavy lifting.

I damn sure did my part. I got involved and showed up. How about you?

You are a pathetic liar, fag.