TheDonald
Communities Topics Log In Sign Up
Sign In
Hot
All Posts
Settings
Win uses cookies, which are essential for the site to function. We don't want your data, nor do we share it with anyone. I accept.
DEFAULT COMMUNITIES • All General AskWin Funny Technology Animals Sports Gaming DIY Health Positive Privacy
257 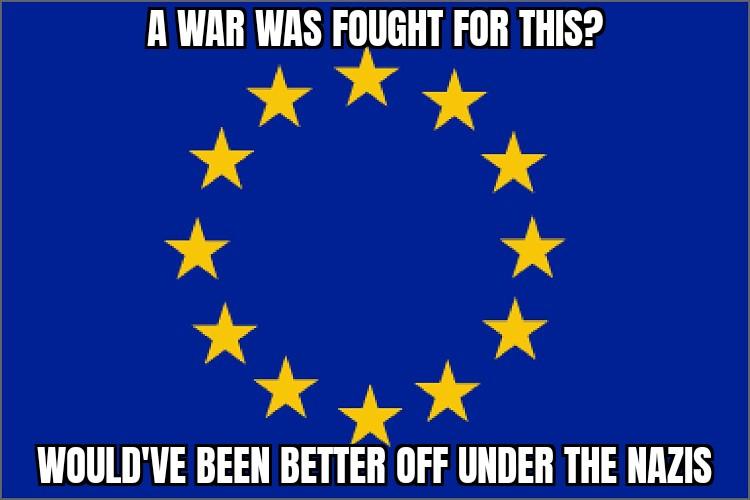 The National Socialists lost the battle, and the Communists won the eventual war.

yea but it took a combined effort of the Entire planet to bring Germany down, what a fucking heroic effort it was. In time, ppl will find out that Germany is shrouded in deception and lies. Read what JFK said about Hitler in his Diary or even General George S. Patton

Hitler isn't a hero, and he never will be. As far as I'm concerned, it's just unfortunate that we didn't let Europe destroy itself.

Or better yet, since Hitler's plan was originally to invade east, and was only forced west by brinksmanship on the part of the west, it would have been better England and France just let Russia and Germany destroyed each other. Would have sucked for Poland and Czechoslovakia, but not any worse than it already sucked for them.

If Hitler had plans to invade the East first, then he would have invaded the East first. Period. Point blank. You don't go to the sea by way of the moon.

He did invade the east first.

Really? I missed reading about that part in history. Maybe you can show it to me.

Then Hitler invaded the west.

His plan was to invade Russia and sell off the stolen land to repay the debts he had taken on building up Germany. He had backed himself into a corner where that was the only way to repay his financiers. If the money ran out he would have faced too much internal resistance. Looting France ended up staving that off for a while anyway, but Russia was actually seen as the softer target before 1940.

Communism and National Socialism are just opposite sides of the same exact coin. Both are antithetical to allowing those who choose to believe differently to exist.

Ummm, you do realize that between you National Socialists and Communists, you both have managed to kill the most white people in history?

With friends like you, white people don't need enemies. You're doing all the extermination for them.

If anything Hitler led to White Guilt, but I'm sure that communist would just use imperialism as their main excuse then to let millions of Third World Savages into our homelands.

Europe IS destroying itself, because Hitler was a delusional megalomaniac.

People today are so religiously "never again" that they've tipped the scale, the table it's on and the whole continent into the other direction, using many of the same tactics oppressive regimes throughout history used, including the Nazis.

I really hate where this reference originated, but it's so appropriate....

You either die a hero, or live long enough to see yourself become the villain.

Hitler was planning on “unifying” Europe too and calling it “Germania”. This is basically the modern day equivalent.

Yes it would have. Hitler thought muslims were better and easier to control than Christians. The importations would have started sooner.

It would have given the same result. Socialists are socialists, no matter what adornment they show.

Did not Germany and the German people get destroyed by the nazis? The nazis wanted Gotterdammerung at the end rather than admit defeat (which they blamed on the failings of their people, not taking responsibility for the debacle themselves), and it was only the sense of self-preservation that finally made people turn aside from their ridiculous monomania. And much that had been great and good was lost thanks to the nazis. Socialism kills, no matter what kind it is.

At least with national socialism, no one went hungry who was a reich citizen. And they didn’t allow massive invasion by melanated uneducated peoples

People most definitely went hungry and an invasion did happen -- killed by a Russian, killed by a Somali...either way, you're dead (and your gov't. failed to protect you because they were never about the people).

operatorstorm712 They went hungry because the allied powers bombed all the food supplies, then everyone cries about the j3ws looking all starved to death. allied powers dropped fire bombs on civilian targets, i consider this far worse than the claimed holocaust. or was the fire bombings of german citizens considered the holocaust but we have all been deceived ? Holocaust : An ancient Greek word meaning ''Mass burnt sacrifice'' did any jews die from fire? nope did German women and children die from fire? Yes

You know your history.Most pedes here know the MSM and Academia lie about Trump but they can’t still fan them that WW2 has lot of deception.

Look at the nazis' socio-economic platform. It is the same as communism. It has a nationalist flavor, but it's the same thing. And, it led to the same results. Socialism never works, no matter what it's flavor.

If the ''Good guys'' won world war 1 and 2 then why is the world run by evil pedophile billionaires? Hitler was right about the weaponized media, he was right about the international banksters. A great civilization was lost but now...you all can see that it is possible to manipulate the minds of the masses with weaponized media, if they could pull off an American election theft and a RONA hoax world wide do you think it is perhaps possible the holocaust was manufactured ? i urge you all to look on a map and find out the exact locations of EVERY claimed gas chamber death camp. You will then notice they are ALL on the communist (USSR) Side of the Iron curtain. a small detail that will red pill you, NO ONE KNEW ABOUT THE HOLOCAUST UNTIL 6-12 MONTHS AFTER WW2 ENDED. THINK LONG & HARD ABOUT THAT. (I understand if some of you are shocked by my comment but I only care about the truth even if it offends ppl) Check out a documentary called Adolf Hitler : The greatest story never told

Yep, great watching, also read up on holodomor in the Soviet Union, an even greater massacre of Christian ethnic Russians by the bolsheviks, it’s sick how history has been written after the fact. No one cares about the actual facts. Good for you @teflondon

thank you fightingTeuton , I get a lot of hate for the things I say, but all i care about is the truth even if it leads to my death.

Yes sir. Don’t fret about what people think. Too many brainwashed people to history regardless of having taken the “red pill”. We are not lemmings nor sheep, we can see history for the truth it is. If ever in doubt about these questions, go and see what the Judaics say about their own actions on the Jewish encyclopedia. They admit themselves. They want and crave the credit. Just the truth is all the matters.

Churchill even said the reason why there was a war was because Hitler arrested a Rothschild .The official numbers Red Cross gave is totally different.

Its the same picture, not worse.

EU is most definitely worse. At least ideologically, the Nazis wanted to created a homogenous society and elevate their own ethnic group. I'm not Aryan or German, or even Anglo-Saxon, but I can see the objective usefulness of doing that.

The EU, on the other hand, wants to dilute their own people by importing a different people. This makes it hard for the population to ever revolt, because the different groups will be played against each other. There will also be no common understanding of values, because values will be different. The EU is essentially trying to degenerate rather than elevate its population, so that the oligarchs can easily control society.

This idea does not require or assume that the imported population is inferior, only that they are different and come from worse backgrounds.