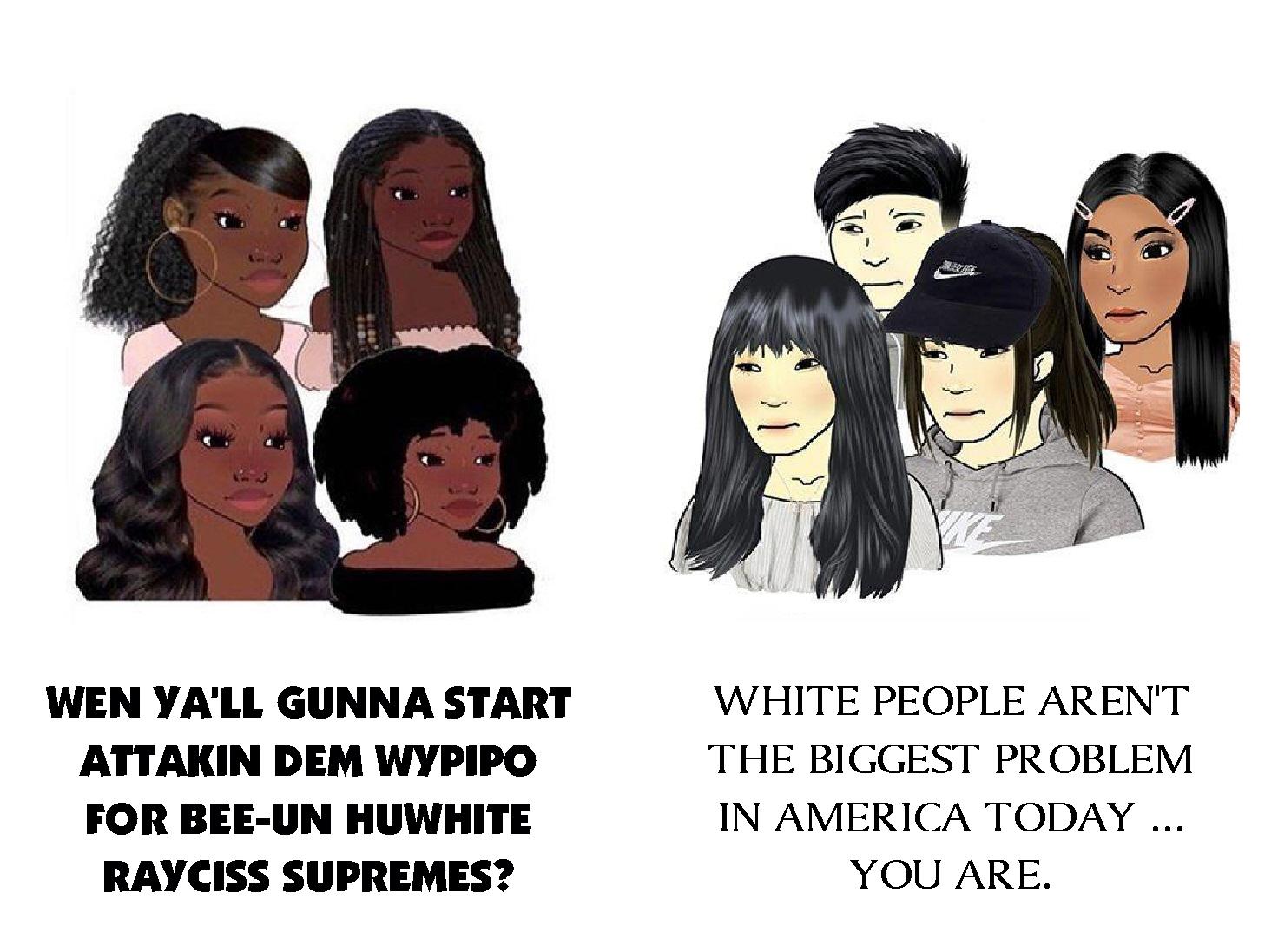 Black dude here. I blame Democrats for defunding the police. Democrats have no exit strategy when they've enabled crime.

I'd much prefer hugs, handshakes, high employment, and low crime for everybody than rooftops speaking and racism.

Stop telling New Yorkers to move. I mean yeah it sucks but do you want them voting where you live?

I have been going back to Thomas Sowell, and he nearly predicts this stuff.

But Sowell lays out how the Civil Rights movement was cooped by communists who have been peddling communist propaganda since the sixties.

As much as the left is attacking whites, I still think it would be a mindfuck to be a black American right now. The left is telling lies about your situation, and the right is thinking that you support those lies. And god forbid you live in a city. The police want nothing to do with you for fear of being the next Chauvin, despite you actually wanting a police presence.

Come to Wisconsin if you ever need to move! The towns outside of Milwaukee and downtown Madison are very welcoming, especially if you are looking to join a church.

Good point. Imagine if our entire culture was obsessed with meth-head white people in particular. They define the entire white race by it, blast it all over the television, glorify the meth head lifestyle. All the music videos, degenerate meth-heads rapping about taking meth and fucking whores who come to them just for meth. Both your kids and black kids and mexican kids all think the meth heads are cool. They walk around pretending to tweak and talk twice as fast as a normal person.

On top of that, whenever a meth head gets arrested and hurt by a cop, the whole society roars in an uproar about "white lives matter." You see black people and asian people on social media saying they hate white people because of all the meth they smoke and crimes they commit. You actually completely agree but when you go to the black and asian website you see a lot of talk about how bad white people are.

But then on the other side everyone is basically saying that being white means being a meth head so if you're with the whites you have to support meth heads and everything. They admit that the meth isn't great but it isn't white people's fault because historically it was Asians and blacks who held them down so you shouldn't criticize the absolute garbage meth head culture. Instead you claim that racists are exaggerating it out of one side of your mouth but then support meth heads and make excuses for them out of the other side of your mouth.

It's got to be strange, man.

Democrats have no exit strategy when they've enabled crime.

The original plan is to fully federalise the police, and disband local PDs.

Breitbart story about it

Co-Chair of that task force is Charles H. Ramsey, former Commissioner of the Philadelphia Police Department.

Ramsey appeared with DeRay Mckesson of BLM argued the "Defund the Police" narrative is just a bad choice of words.

DeRay Mckeeson has worked for Soros since he was a teenager

Throw in a few carrots and baby, you got a stew going!

Unpopular opinion, but I don't think you can in good conscience blame the Democrats for race baiting, if you immediately turn around and start race baiting, yourself.

When realistically, the goal should be to demonstrate that there is only one team; American. Instead of requesting a defender, it should be demanding evidence of accusation and wrong doing.

Largely, they don't have it. Which is why the Left continues to simply repeat themselves louder.

Our biggest problem is that we try to use the Left's toolbox of disingenuous tools against them, when really, we only need one. We need to get loud. Very loud. We need to be heard on merit, and not on grievance.

Nope. Just points out that Asians arent falling for the anti white narrative as they have bening aware which races pose a physical threat. You're overanalyzing it.

That's what the lefts wants. They want you to play their game, so that they can beat you with experience.

Those darn leftists. Tricking people into noticing black people disproportionately attack Asians. And then tricking us into laughing when leftists try to shift the blame of those attacks on people who said "Kung Flu".

Man your head is up your ass. Responding to the rampant racism of the left by mocking its absurdity is a perfectly fine response to their all-out assault on whites.

It's one thing to suggest that it's absurd to suggest white people are responsible for the crimes of black people. But you can point that out, or even mock it, without suggesting that "asians are on our side" like this meme appears to suggest.

Like I said, there's only one side here. American. Treating race as a more important factor than it is gives lefties more ammunition, whether you like that fact or not.

Indeed, that's part of the point of them race baiting. If they say "this is happening because white people." and you make being white part of your argument, they'll immediately turn around and say "See, look at this racist being racist at you and me."

It's not a good argument, but it is an effective one. Combatting it takes tact that your viewpoint lacks.

Irony entails that you've made a point or somehow countermanded my point. You haven't.

Race isn't relevant to America. Stop playing the Race game. It's a game that leftists win, and a game you set yourself up to lose.

You're just like a liberal: pretend things are the way you wish and then hope reality catches up.

The black ladies are too thin cute and european looking

There needs to be some white SJW liberals on the left as well.

The white suburban middle-class liberal arts college students are the worst race-hustlers of them all.

they wont take to the rooftops ever again. those waves of korean immigrants who had mandatory korean army conscription for 2 years arent coming anymore.

When I watch those old videos of rooftop Koreans I dont see what I would call military discipline or training. Often they would stand in the wide open, make no attempt to take cover, and firing wildly with one hand in strange shooting stances.

I wonder wtf they did during those 2 years of training.

“Black people are the biggest problem in America today”.

Interesting. As if we put ourselves on boats, in chains, and voluntarily came to America? The Democrats have been fully engaged in racism and tribalism for years. Let’s not join them by stooping to their level.

This photo is exactly how to drive black pedes who may or may not be new to MAGA away. I’m not new to MAGA, but posts like this...I wouldn’t dare show this site with these kinds of posts to my 68 y/o mother, who was old enough to live through Jim Crow in rural Alabama.

And many blacks are successful incredibly successful, we have plenty of multi-millionaire and billionaire blacks in this country, and so that’s just one of the reasons why I remain confused as to how blacks are considered as “the problem”.

No race is perfect, as no person is perfect, and I could engage with you about how many policies passed after 1960 hurt blacks under the guise of helping them, and how many of those screaming about racism are white liberals, but there is no point.

I just find it preposterous to blame AN ENTIRE RACE for what a small minority does. I hope you enjoy your tribalism then, because it isn’t going anywhere anytime soon and it does nothing to help MAGA.

One in three black men is in some phase of the justice system (prison, parole, probation).

70% of black children are born into single parent homes.

The small minority statistic is in reference to the percentage of males 18-35 who are responsible for over 50% of violent crime and their standing against the rest of the total black population. And then what factor is that standing against our total population at 330 million Americans? And yet this forum was littered with posts blaming the entire black race based on the actions of a few? Yeah, you knew that but you posted some other shit anyway. ✌🏽

You act like the 1 in 3 black males committing a crime serious enough to warrant jail, probation or parole is not a result of a poisoned culture, that they are some isolated anomaly that isnt the obvious byproduct of broken homes, fatherless children and antisocial attitudes about everything from education to law enforcement.

Go ahead and believe it is a 'small minority'; I'll continue to notice that the more blacks congregate the worse they behave, and that is almost exclusively true down to the individual level.

I literally addressed the things you just listed in my previous comment.

No, you think you did but failed completely. Words have meaning. 1/3rd of the men being convicted is not "a small minority". And these criminal behaviors are a result of a culture that has broad support.

Wealthy whites could tell their counterparts to do the same and what will that do?

Policies need to change. Fix these schools, focus more on the three Rs rather than activism, incentivize work, not welfare. Return to God, go to church. Wait to get married before having children. “You may not be responsible for the outcome, but you are 100% responsible for the effort.” - Larry Elder

Let’s be honest. Asians will still vote Democrat. Most Asians coming in now are from China. They like communism light.

Don’t rely on Asians falling into line with Americans on this in any significant numbers.