TheDonald
Communities Topics Log In Sign Up
Sign In
Hot
All Posts
Settings
Win uses cookies, which are essential for the site to function. We don't want your data, nor do we share it with anyone. I accept.
DEFAULT COMMUNITIES • All General AskWin Funny Technology Animals Sports Gaming DIY Health Positive Privacy
1692 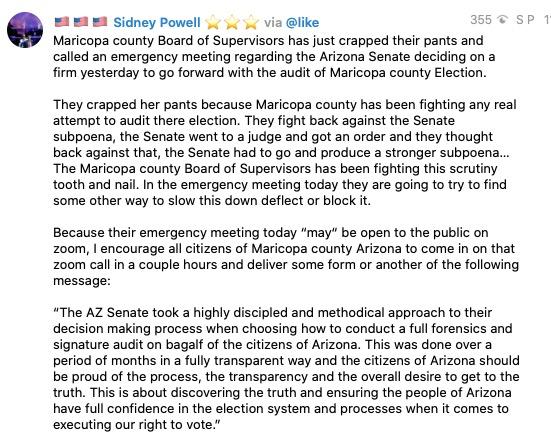 The Fraud was nation wide in the swing states.

If any real audit can expose it in any State then there might be hope for the Truth to see the light of day.

Just one needs to break for it all to come down.

Maybe this is wishcasting.

But maybe it isn't.

I'd be stunned of there was anything left to audit. After the shredding, fires, and who knows what else months later, what could there still be?

We can’t let them destroy the Non-Conforming ballots May 3... these ballots are the proof of their criminal acts! This is the smoking gun!

They may destroy them right now. Destruction of ballots has gone unremarked.

Yes, they were already destroyed but the May 3 date will make it ok for them! If they get to that date then they can legally say they destroyed them as per the law.... so we have to block them.... those ballots were not subpoena’d, these ballots are the FORGERY ballots that were made overseas and could not be scanned because they didn’t meet the scanner readable requirements.... so they redid the ballots on REAL BALLOTS and voted with voter INTENT!

ouch -- they pulled a Swalwell-Nadler and crapped their pants!

Rigging an election is the highest crime there is in my opinion....the fact that so many are so unethical in our country is concerning...the people who did such rigging should suffer the highest legal punishment...

Yup. All intentional election rigging should be minimum sentence of execution

It really should be. We aren't even a country if we don't have honest elections.

The misspellings made me cringe

I don't think that typo is a Gimmick. If she typed it from her phone, chances are it auto corrected fought with thought. I have had that happen so many times when enter a legit word and the phone will change to another word after you hit enter to send

It just looks unprofessional. If you are going to make an important statement, take the 30 seconds to re-read it and catch silly shit like spelling errors.

I'd say some was intentional because the BlueNews will quote it to make fun of her and redpill more people. Also, I talk into my phone for things like this and no matter how hard I try, typos get through.

Reads like it was typed on mobile tbh, not a big deal

Nah. The spell check nazi changes words AFTER the fact. You have to double triple check. Not sure about thought and fought though.

How does a top lawyer not know use of word ‘their’ And ‘there’?

Why is the audit not happening right now? It seems Board has absolutely zero official power to stop this now. Who cares about their emergency meeting?

Emergency meeting might not be about how do they block it at this point, but rather, "how do we get our stories straight so that we can all stay out of jail when they discover the fraud?"

They have been doing this privately.

miraculously the senate STILL does not have physical possession of the ballots.

In AZ we're about to organize a Tombstone event. Sick and tired of these 4 small people destroying businesses, keeping us apart, ruling the roost like they are kings. Want to know the kicker? Only ONE of them ran as a Democrat. The Other 4 are supposedly R's. And one of them is named Bill Gates!!!

Either somebody else wrote this or Sid as an attorney doesn't know how to spell worth a shit.

One falls they all fall

Too many spelling, grammar, punctuation, style, and usage errors. And Sidney would never write “crapped their pants” OR repeat it as “crapped her pants.” This is just stupid. 🧐 🙄😒

I Highly doubt Sidney Powell wrote this. Spelling errors, grammatical errors and doesn't sound like a lawyer at all

Don't be so surprised, this is the woman who misspelled "district" multiple times in her Georgia court filing.

Then there was the Michigan court filing where some sentences didn't get spaces between the words.

Sorry, not buying it. They said something at the time that the only reason the MSM would mention the filings was Because they had misspellings. The MSM won't mention this and it wasn't written by Powell. Lots of misinformation out there, this one just adds. Go to her website and see if she mentions it.

That is not Sydney writing that. Tons of grammatical errors.

I live half a world away from AZ but I have been closely monitoring their progress, and if they were to scrap the audit at this point I would be furious and probably willing to make threats online that wouldn't be ignored easily.

So with that said, I would like to think that there are people even more heavily invested in this process that live less than a mile away from the board of election members who would be willing to do more than make off-the-cuff threats.

It's kind of surprising these people can even drive around and live in the community that they so brazenly ripped off. I would think they'd all be in hiding at this point. I imagine there's plenty of old timers in their neighborhoods with nothing to lose who would take exception to their continued swindle.

Can we please crowd-source the funds to hire a proofreader for this woman?

bagalf you don't liek it?

What's up with all the typos? "There/their", "begalf/behalf". That seems... odd?

I am an engineer, and her grammer/spelling put me off.

I dunno. I fully trust the Board of Elections. Why audit a perfectly executed and wonderful election?

Would Sidney misspell their for there? No.

Get them some of these

Pedo Joe probably craps his twice a day, but he's still in the white house and Trump isn't

For a high-powered lawyer, she’s a wreck

It seems she's using voice to txt function on some device. It can produce some funny results or can really change the meaning of what you're trying to say. I wouldn't read too much into this, but I understand the concern. The one court filing was full of mistakes that I believe she had some unpaid assistant write up. At least I hope that was not her personal work.

I'm not much of a grammar or spelling police type, the thought of the post is what's more important, but you'd think a lawyer would proof read.

That can’t be her. This person can’t write or spell, and Sidney is a genius. LARP unless you directly link

Why do people insist on calling her by her first name?

Yea right. She’s a total clown. No I won’t explain. If you want to know what I think of her and her clown show, please go back to my comments/posts from December 2020 and start there

username checks out i guess

Yea I guess so too. That’s about all anyone can say. Ad hominem and straw men are all I get. I am used to it by now

Well when you can't be bothered to type a few sentences to explain your sentiments, and would rather send people on some random search through your old comment history...what do you expect?

"Oh some rando on a .win site is claiming Powell's a clown. Let's waste 20 minutes picking through 4 months of shit posts and bullshit memes to try and figure out how this story begins"

There are several stupid mistakes in there. Not a good look.

Ugh, agreed. How can she be so stupid?

Hey now, im an engeneeer and cant spell worth a crap. But i make the world work.

I don't mean to black pill anyone, but I have to offer this as a warning anyway.

With the amount of time that has elapsed since November 3, the fraudsters have had more than enough time to 'scrub the crime scene', so to speak. If half-serious recounts don't result in some sort of earth-shattering reversal of the results, it won't be because there was no fraud, it will be because our 'leaders' took way too long to act.

Why does everything Sydney write have so many typos? She needs spell check

They crapped her pants?

I'm just glad they Arizona senate is doing this on the Bagalf of the citizens of Arizona! That's good!

Letter is skeptical, to say the least. But on to a more reality set of issues, on the election. Why has their been no arrest, on the fraud that has over whelming evidence, of election fraud? Why haven't we even heard of criminal investigations have been opened, towards any election fraud that we seen occur. The mere fact that neither has happen, leads to believe what Trump said in 2018, was correct. He fore-saw the future, and stated, he would be the last elected President this country ever has, because from the end of his term, moving forward, would all be appointed.

She misspelled their. Do you think this is fake?

Didn't they already do that?

IDK but I wouldn't be surprised.

These people are so smart but still can't properly use there, their, and they're.

Clown world is giving me a superiority complex.

It would look a lot better for Sydney is this post wasn't filled with spelling and grammatical errors.

i don't think this post is wrong, but i do think it was written by Sydney fucking Powell.

I know this isn’t the big issue but holy fuck, proof read tweets before you post. Communication is a big thing for lawyers, or so I thought

She needs to read what she writes. It's hard to take a lawyer seriously who doesn't know the difference between "there", "their" and "they're".

Everybody fights going to jail...

Treat them like the government we pay for treats us... If there's nothing to hide, what do you have to worry about?

the BOS is just protecting us from being incitied to erections and coup de titties because MOST SECURE ELECTION EVA!.

Is the crap in their pants as big as the kraken was?

Yet - if you go online and see what the Twitter response is, you can clearly see the resistance to this audit. IMHO most of the responses are either bots or paid shills, but still, it will influence the low-information-knuckleheads to believe it's a waste of time and money. I know 5 liberals here in AZ. 3 of them don't know what's going on and weren't aware of an audit. The other two said, "Well, it will settle things once and for all." So I don't think the blowback is all that real. Good ol' "Correct the Record" and all the other Blue fake news purveyors.