TheDonald
Communities Topics Log In Sign Up
Sign In
Hot
All Posts
Settings
Win uses cookies, which are essential for the site to function. We don't want your data, nor do we share it with anyone. I accept.
DEFAULT COMMUNITIES • All General AskWin Funny Technology Animals Sports Gaming DIY Health Positive Privacy
1371 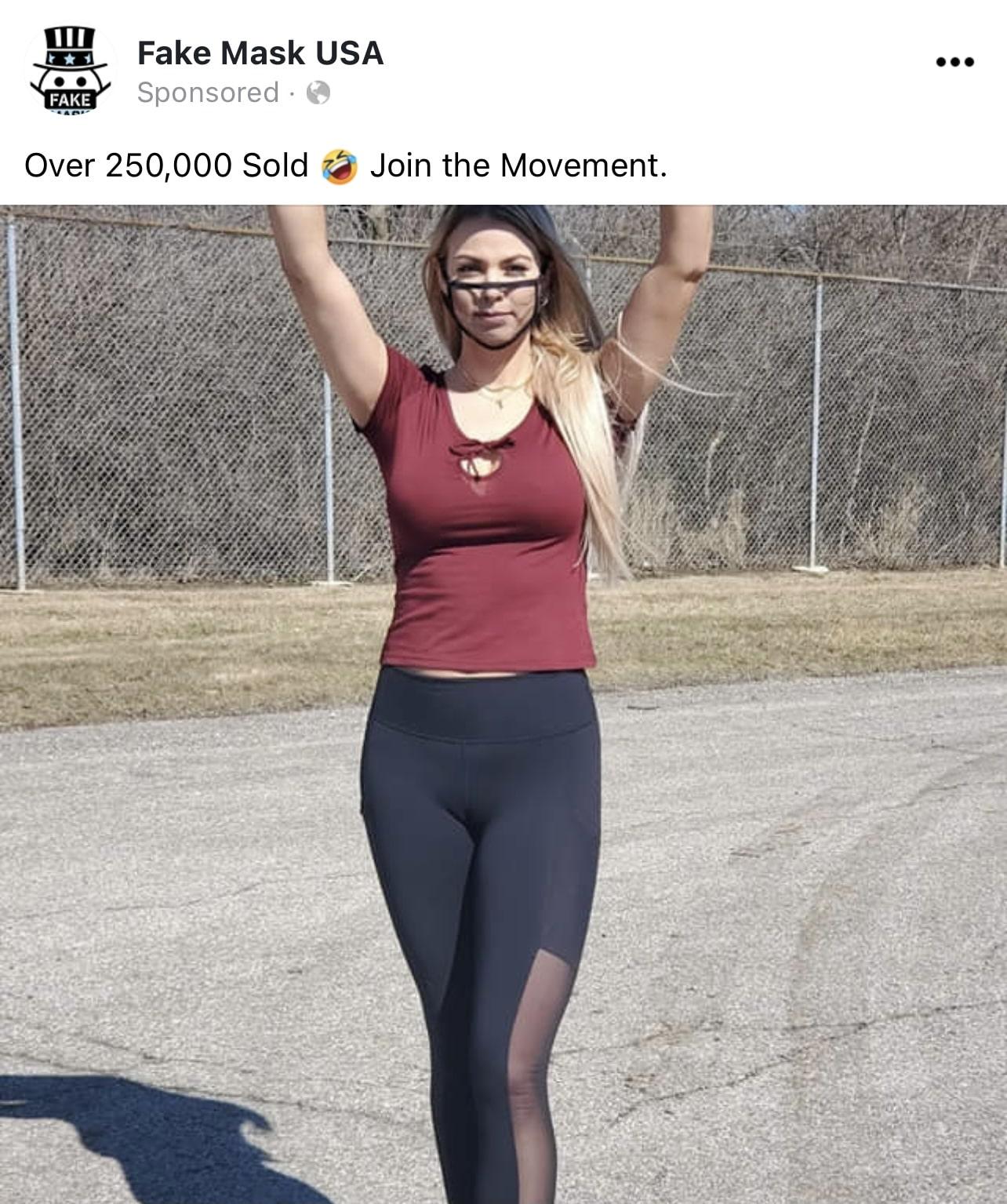 I'll take one. Just don't tell my wife. The mask is cool too.

There is a mask in the photo?

Couple feet up from the cameltoe...

Not gonna lie...I can't stop looking at it.

Stop complying and wearing any mask. Stop validating their psychosis.

^ He’s right you know. The joke masks are just as bad as the actual masks, which are jokes themselves.

Disagree. This fake mask is like a Real Life Meme that would definitely grab attention by letting Karens know they're being laughed at.

disagree man. i wear face shields everywhere and people give me looks. either mean ones or "good for you" type looks. real story, not fake, but people do come up to me randomly and talk about how stupid this whole thing is. They can tell when you're wearing a face shield.

It also gives other people the confidence to do the same thing. Peer pressure works that way.

This girl's transparent mask is next level shit and I'm gonna buy one if they're still available.

imagine how much farther it goes if you just don't comply at all.

This one. Do everything you can not to comply.

i've imagined that. i've also imagined other consequences that go along with that.

I have never worn a mask except when work requires it. Noone seems to care, one way or another. Well, authentic Mexican restaurants do, but Mexican food sucks anyway so no loss there. And black people seem to really believe if they get within 6 feet of another human they'll die within a week.

Lol ok. Have fun with your tard shield

i hate this thing but i live in retard land. i'd much rather go 100% without masks everywhere but in my neighborhood i'd just piss too many people off. there are certain places that I know they won't throw a fit so I don't wear it there. but there's other places where i know it's just not worth it. i generally like where I live and I'm not trying to make life long enemies.

Just so you understand, they are already your lifelong enemies. Silence and compliance out of fear means they win.

THIS is sadly true. I live in a very blue area, and work in expensive resort homes. Most of the people in the area are VERY rich and VERY liberal. (Oh the irony).

I'm cool with being nice and making people feel more comfortable. If it's going to spare me an uncomfortable confrontation, when in a professional environment.

But I don't think for one second that any of them are my friends.

When do you consider "shit hitting the fan"?

I have people come up to me randomly - or respond to my comments, and talk about how stupid this whole thing is, too. The difference is that I never have, and never will, wear a mask or a face shield because someone told me I had to.

Funny thing is, nobody who talks to me "socially distances". The masks and face shields simply separate those who conform blindly from those who make their own decisions.

beat me to it

Less toe, more class please. I am looking for a woman to be the Mother of my children.

ads are so out of touch with their actual customers desires.

He wishes it was big moose knuckle instead.

Sometimes I really think people need to learn to balance their religion and acceptance of existing as a human being. I’m not Jesus, you’re not Jesus. We are humans, we are sexual. If you want a woman to be the mother of your children, you’ll need to dip your pork steeple. It’s going to require sexual attraction. If you saw a woman you were attracted to, maybe you describe it as “love at first sight”, but suddenly you notice her fat vag is showing through her pants, do you immediately write her off?

You my friend are a Boehner lover. Stop looking for a mother to your children, you’re gay. It’s cool, I’m not judging but stop bullshitting. Either that or you need to be a more well rounded human being.

Shit...I'd take her out. Wouldn't even think twice.

lol, holy shit that was vicious.

I don't like prostituting out women to sell things.

I’m sorry I was an ass hole earlier. Mood. But seriously, I don’t want to be involved with a movement that pigeon holes our sexuality. I’m a bit of a prude, but a fully clothed woman is not what I would definite as “prostituted”

I was an asshole and I’m sorry

Racist? Dafuq does that have to do with anything?!?

I’m going to be here forever. No doors swinging behind me. I’ve had words with people on here many times and it almost always gets sorted out or someone apologizes.

I still disagree with you, it’s been a building frustration of mine and I dumped it all on you. That was wrong of me. I should have spread the frustration evenly and just slightly shit on all y’all but I messed up. Again I will apologize, I’m sorry pede. My objective was not rooted in the intention to humiliate but rather I wanted to make a point. I’m being genuine here...

Guess you’ll be a nudist then. Or maybe you’ll only buy clothes from stores which advertise clothes using obese people.

You might be looking too much into this. I agree with you but this is not prostitution. This is an image of a woman showing freedom. She’s not unclothed and not being seductive at all. Or do you get turned on when a referee during a football game signals a field goal?

The communist programming is strong with this one.

I’m just saying, if you’re talking about me...if you’re saying a love of pussy makes me a commie....well...I guess I’m commie to the bone

Your product sucks if you need to prostitute a white girl to sell it.

How about we quit playing this game altogether?

Its so there are seams and weaker fabric there so that they can rip more easily and need to be replaced.

This dude knows what's up

interesting yoga pants are where some get their personality.

I wish all her clothing used the material in her mask and lower tights.f

Only faggots wear this. If you haven't taken off your mask by now, go join the Democrats.

putting fake/meme masks on is worse than submitting with a real one.

Wanna trigger communists? Walk into a fucking store where everyone but you is wearing a mask. Tends to get the job done.

i fully agree with you, i've never worn a mask, not once, not ever...

but some people don't have a choice, they have to wear one or get fired, in which case, the best thing they can do is tell everyone to go fuck themselves via an "obey" mask.

yep, they are "obeying", but at least they see this for what it is, and perhaps "obey" wakes some people up to the ridiculousness of this entire thing.

yeah but understand that it's symbolism...

it's saying that forcing the mask is forcing you to obey

you're not picking up what i'm putting down...

there are two types of people... people who see that meme and internalize it and "obey" harder...

nobody who posts here sees that shit thinks "thats a great suggestion, i should obey, it's better for me because i trust jefferey epsteins friends unconditionally".

"obey" on a mask is just a callback to the film "they live". the entire point was exposing the conditioning and propaganda of the enemy who is trying to destroy our world by hiding amongst us and destroying our society with subliminal messages.

the only people who could see "obey" were the heroes of the movie who used special glasses to see through their bullshit.

if you can see "obey" you are the resistance, because you now know their secret.

I tell any idiot that complains that it is made with a Biometric Polymer with Electrostasis Technology that traps 99.9% of all virus particles. And that their ridiculous cloth mask only captures 8.9% of viruses.

Then I tell them that since they want to talk about public health, they should knock off about 80lbs and they would be much safer.

My favorite is watching fat people pull their masks down to smoke cigarettes. Yeah sweety, worry about the wuhan flu, not your extra 180 pounds or the two packs a day you're sucking down

I got two of em. Sadly, I live in a rural area and nobody even cares. Only one person even mentioned it, and that was to share a laugh with me.

All I see is camel toe. What's being advertised here?

Trigger a liberal? Because it's a cute girl, right? ahahaha

How about not wearing them you faggot?

To be fair, just about anything can trigger a liberal.

got the incognito ones

I want the meat mask that she has underneath

you should see the shirt they sell to go with it.. https://fakemaskusa.com/django-meme-t-shirt/

I need that mask and a blank vaccination card.

I have one of these, it usually works except once in a hospital, but it looks like a pair of panties. I mean it's no more stupid looking than any other mask, and I recommend it, but be forewarned.

Better yet don’t wear one

You can make your own too,

Mine are supposed to arrive today.

Or, just dont wear one to begin with, and when confronted, tell ximselfs to FUCK OFF

Don't buy this trash, these are just merchants trying to make a buck on the non-mask wearers.

Why should I give a damn what a liberal thinks? Caring about what they think got us political correctness, safe spaces, twitter mobs, etc

Fuck them and fuck who is selling you strips of cloth... is this gonna save the country if I send someone money for cloth?

I use to get that on my FB. The girl is sooooo sexy.