TheDonald
Communities Topics Log In Sign Up
Sign In
Hot
All Posts
Settings
Win uses cookies, which are essential for the site to function. We don't want your data, nor do we share it with anyone. I accept.
DEFAULT COMMUNITIES • All General AskWin Funny Technology Animals Sports Gaming DIY Health Positive Privacy
3982 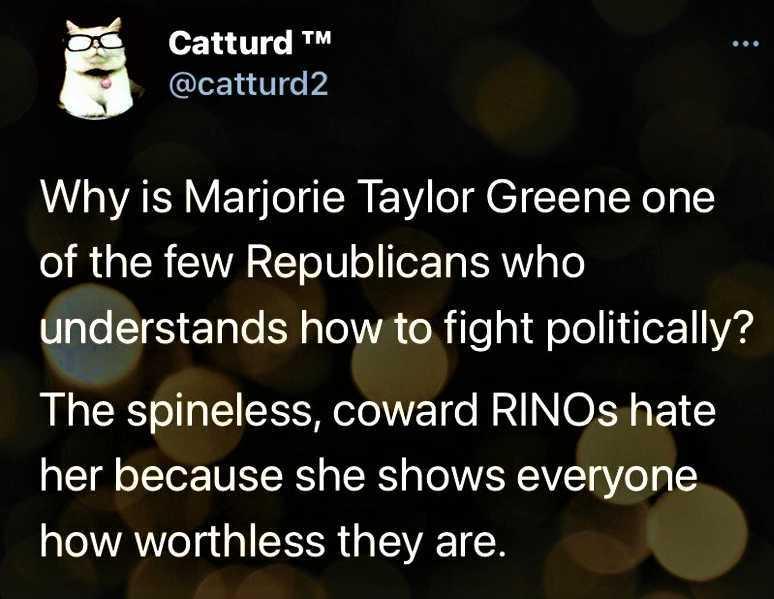 As she said, she went to Congress to change things.

RINOs are happy just to be in Congress.

You gotta love Catturd and MTG.

These are both people fighting for America!

The cast majority of RINOs in congress are only interested in lining their pockets, which is done by NOT rocking the establishment boat. This why people like President Trump and Rep. MTG are despised.

We need more of them!

And they're going after her with people like Nick Fuentes and others to try and taint her with racism. Handshake account u/a1a1a1 claims to be for her, but most of xer's posts are racist and bigoted nonsense then a demand that we donate to MTG.

MTG is awesome as are so many of the new, Trump style Republicans and we can't let them try and taint them with the same lies and made up BS that Trump had to deal with.

One thing Democrats do not have is ethics or any sense of fairness.

They believe the end justifies the means and they don't care how the get there. Rules be damned.

just donate to MTG...please...A hero. attempting to deal with a black piece of shit.... MAXI-PAD WATERS...This is NOT a demand...

She's a piece of shit, not what you said. Stop slurring MTG by talking racist shit and associating that with her, she's not about it and you're not a legit supporter, you're just associating her with bad shit to intentionally make her as toxic as possible to many other people and making her job so much more difficult, you worthless shill.

Because she's participated in the real world for most of her life, rather than cultivating a political persona since age 16 like most of the congress critters.

Many/most congress-crooks were born with the silver spoon, and have never had an honest job (certainly not anything that involved manual labor, which they would only do long enough for a photo-opportunity.)

> Wasn't there a story about Bernie Sanders getting kicked out of a hippie commune for being lazy/refusing to do chores? (The millionaire class sees "chores" as something the servants do.)

Yes Bernie was kicked out of a commune because he wouldn’t help with any of the work and just wanted to talk about communism all day and even distracted others from their work.

LOL!!! So a perfect DNC presidential candidate, then.

> Moar "qualifications," back then he wrote some sort of rape-fantasy-fiction that would get anyone but a DNC Darling permanently cancel-"cultured."

This is the most accurate post I've read this year. Never thought I would say these words, but God bless Catturd.

Not sure I agree.

The other day there was a post of a tweet by Steve Scalise that was nice and fully of red meat to feed a hungry base with content.

Scalise was maligned as a RINO that isn’t actually doing anything to fix the problem. Which he doesn’t have the power to do. But the man has literally taken a bullet from a Bernie Bro, and he keeps on in the fight.

MTG, who does less actual work than anyone else in Congress bc of the stupid decision to keep her off committees, tweets red meat and ppl love her.

Has she formed a coalition or voting bloc to put pressure on anyone?

Does she have any friends? In the House, you will be irrelevant without friends.

All she does are tweets and stunts ... so that people will donate to her campaign, which has raised millions of dollars this year.

I look at every congressman as a clown until proven otherwise, and she hasn’t graduated in my book.

At least Scalise took a bullet for us...

Yeah I'm with you. Not a fan of this chick. Not the worst thing I've ever seen, but when actually given an opportunity to stand with a caucus she said no. And why? Because white people. Fuck her.

Not sure I get the white people reference, but she is as much of a persona as any of them.

She moved to the reddest possible district to run for Congress and ran by spewing Q talking points.

Not my cup of tea, but I’ll take an ally in the fight any day.

Ron Paul was great, but he could never get anything done as reasonable as he was on no unnecessary wars, freedom of speech, the war on terror freedom from overbearing government and government spying. I love MTG and I want to really like Scalise as I don't think he's bad, just pragmatic enough to look that way.

Ron also gave us Rand, who won mainly bc his dad’s network financed his primary campaign and thanks to his dad’s team he had unfettered access to Fox News interviews.

Rand’s team proved incredibly idiotic for advising that he go after Trump right out of the gate at the first debate, but he was able to mend fences and work with Trump reliably, unlike Lindsay Grahamnesty.

The Catturd Has Spoken

She has more balls than the men posing as Republican in Congress, especially that dipshit McCarthy. No more money for the RNC until they're worthy and accept MAGA isn't going away.

You are right - they are not now, and probably never have been, worthy of support. We saw how they supported #45. What continues to blow my mind is #45 continues to support them. He could literally blow them apart by and with his supporters standing right beside him when he did it. Crazy.

She is fearless because she is new and doesn’t owe anybody anything. Too bad she stands alone.

The truth? Because she’s a woman, every man they will go after with some bogus sexual assault allegations.

McCarthy is a wimp. He should be demanding Maxine Waters be removed from her committee assignments for instigating violence.

I think it's a mistake to say they are spineless. It implies they are somehow incompetent, when they are doing exactly the bidding of their masters.

It's way worse that being spineless.

Because this isn’t her “profession”

He is incorrect. Completely incorrect. MTG doesn't show how worthless RINOS are. MTG shows that RINOS aren't interested in fighting. It isn't that they don't know how or are so hopeless they are ineffective; it is that they are there larping as having fucks to give about us.

Primary the Repubs that vote against it.

She's the only one representative of Patriots views/ values/interests. Don't be confused, we call them RINOs for a reason.

I stand with her all the way. You are OK too Catturd.

Trump: I will teach them how to fight!

They like being in the minority so they don't have to lead, and in exchange, the democrats get to blame the gop for everything.

Because she had a a decent job before. Enriching herself wasn’t her focus. It’s like when hank hill got the open seat on city council because of those bs low flow toilets.

Who is catturd and why do people stay on twitter to follow catturd? And why is catturd always on patriots, what am i missing?

But who tf is catturd?

“The impeach 46 turd who talks shit.” His tweets are on Rantingly dot com. He has a pic of himself as a white cat wearing black- framed glasses. His tweets are quite succinct and hit the target. He is pro trump

I doubt she will accomplish a single thing.

Don't count on politicians for anything.

It's why almost ALL politicians hate Trump. He made them all look useless by actually getting things done.

Same as how Trump showed everyone how worthless they were. People need to get in front of and behind that lady and help push. She's great.

The RINOs sold out the American People and are counting their 20 silver coins now.

The rest are comprised and or in on it

And why are Republican men hiding behind the skirt of a woman? The media has taken their balls. At least 80% of our current politicians need to be ousted by 2026.

I swear this has to be don jr's alter ego.

The same reason they got rid of Trump.

The vast majority of Republicans are spineless. All of you who don't push for a new Trump/MAGA Party and wish to remain and magically change the GOP are a bunch of spineless remainers.

The only way to defeat the RINO's and Dems, is to hollow the GOP by mass exodus and bringing in a true to Patriotic Constitutionally standing party that has no roots in either of the corrupt two wings.

she's great, but no one will take her seriously due to the Sandy Hook posts/interactions she's had. Unfortunately that's how it works these days.

It's the same reason the GOPe hated Trump.

I think shes just reading here script. Shes meant to satisfy you. Dont forget how the uniparty brought on the end of America on jan 6th 2021 when they ignored and suppressed the vote and installed biden against the will of the people. That was the last day in American history. Its all an act now.

OR she's an actor like most of the republicunts become when they are in the minority.

Is this a picture of a screen?

Both parties are absolute cancer

RINO's are spineless because they have been compromised and bought off. MTG has not and hopefully never will.

We'd be better off if RINOs were just worthless.