Win / TheDonald
Win
Communities Topics Log In Sign Up
Sign In
Hot
All Posts
Settings
Win uses cookies, which are essential for the site to function. We don't want your data, nor do we share it with anyone. I accept.
DEFAULT COMMUNITIES • All General AskWin Funny Technology Animals Sports Gaming DIY Health Positive Privacy
2894 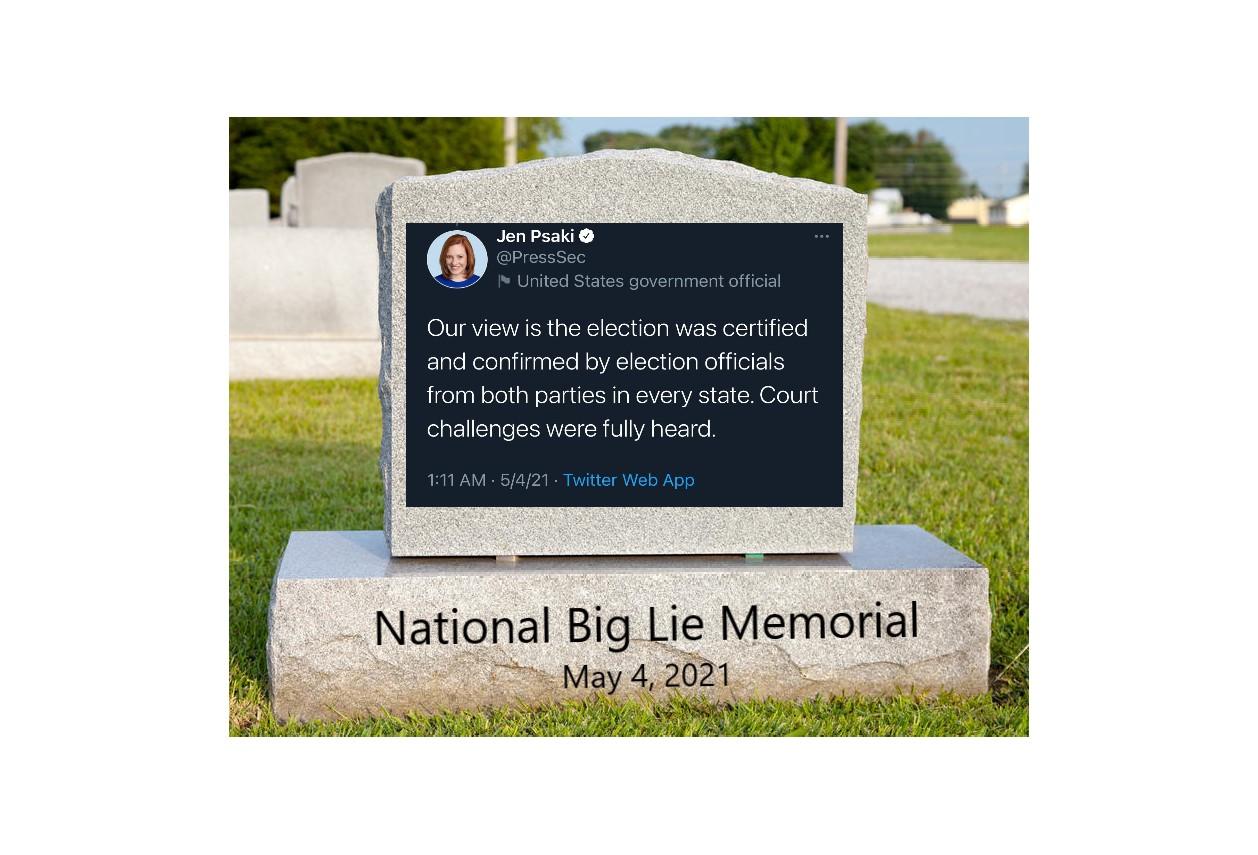 Can she name one single court challenge that was heard then, or will she have to circle back on that?

You guys are burying the damn lead here. This is the first admission that they know their fraud is going to come out and they are trying to cover their bases.

"Our view is" is democrap legalese for "yeah this shits going to court eventually".

Unfortunately, I can only updoot you once. Though I'd gladly create a second account to updoot you again.

The "Our view is" language is telling. It's a switch from claiming facts to claiming opinion.

And why would they be claiming opinion? Is it ass-covering in case a court rules against them?

"Court challenges were fully heard." Except that they weren't. This is an indisputable fact. She's a liar.

Straight up lies to America. This bitch should be in prison.

i believe at this level its treasonous

It's the Big Lie, so that would make her a liar.

except for the minor SCOTUS thing

has something got them worried?

Yeah heard my ass... They were heard just not under oath or in a court.

Well with her red hair we know she’s not any part Korean... she has no Seoul.

Get out of here, dad.

Okay, that's a good one haha

"the last time I heard that, I laughed so hard I fell off my dinosaur." - Step Brothers

Brennan's reaction to that was so fucking hilarious

Why are you so sweaty?

She not from Thailand because she doesn't Bangkok

The fact that they are addressing this is big lmao

This. Something must be coming out.

"our view" as in "our opinion" and therefore completely meaningless.

Kayleigh would have said "The President's view"

I’m really intrigued by this tweet. Apart from the fact that the AZ audit is going on really well and potentially producing results, what else could it mean?

So she tweeted this out of the blue? Liberals who only watch mainstream news are going to be like "I thought we already won a long time ago? why is she bringing this up?" They are getting in front of the true story

Which is a good thing, right? Because from Nov the 3rd to Jan the 20th, they did not address the election fraud even once, and acted as if it didn’t even exist. I take it as really good news. Or am I wrong?

I agree! Thats what Im thinking! This has never happened before, has it? Is there a protocol for what to do if you find out the Presidential election has been stolen? (not that government follows proper protocol)

There’s no protocol. I wonder what will happen. SCOTUS I believe.

It will require military intervention. SCOTUS has already proven they won't intervene and we all know the Biden/Harris/Pelosi and Co. aren't going to step aside willingly for Trump to be sworn in.

I think the press asked her something along the lines of:

"Jen, what do you have to say about Fmr. Pres. Trump's assertion that the election was rigged and Biden did not legitimately win?"

remember when people got kicked off social media fro even suggesting the election was not fair?

now they suddenly want to defend themselves?

It means they have the goods in MI and now the goods in AZ. It means their position will be that the Constitutional process was followed and all that mattered was certification by state legislations and Electoral College results.

See. This is WHY she said what she said.

You accepted her premise. That the certification process determines what determines outright LEGALITY.

That is not correct. The process is just a process.

In other words Joe Biden would be elected via violation of law in at least 4 states. His election would be illegal and invalid.

Now I am guessing the only outright constitutional way to remove an illegally elected president is via impeachment.

But that is exactly what we should demand once the evidence is in place.

They are attempting to avoid that by shoving incorrect notions of process and law down the throats of people.

Try reading my comment again. I'm stating what the Democrat position will be. I have not accepted any premises. I have only reiterated a premise. I would appreciate your acknowledgement that your comment is inaccurate.

I stand by what I said.

Their position is going to be this type of gaslighting through language and we need to be specific about that or we lose.

By even representing their “position” as something which seems to make sense you add legitimacy to it.

Their position is nonsensical and supports an illegal election. It’s important to stress and be specific about that and not push their own purposefully confusing narratives around, especially here where they certainly don’t belong.

The written position is literally language games which I outlined.

The problem is still your own. Sorry that you suck.

So, they do have a position. I see...And I reiterated that position (language games). Yes, yes...delicious.

Is the AZ audit going really well? I haven't heard anything which makes me a bit nervous.

Somebody on the inside let slip that it’s exactly what we expected.

They have to wait until full completion to release results, per the contract.

That's not exactly what they said. They said something to the effect of, "we found what we were looking for." Not sure what that portends, but I don't think it was an expectation fulfilled.

Did you even read what you typed?

Expectation is not the same thing as something being sought. I'll explain. They were looking for ballots, software images, etc. They were expecting to find fraud. I was looking for my car in the parking lot, and I found it. But I didn't expect it to have been broken into.

The person responding in the exchange referenced said enough to get us interested but in a way in which they could correctly state that they didn't admit to anything untoward. In other words, don't get your hopes up based on that particular exchange.

Who the hell asked her anyways? We don't believe them in the first place, hence the audit.

Court challenges were NOT fully fucking heard and that's part of the fucking problem, you vapid cunt.

Courts that did fully hear the challenges ruled in Trumps favor most of the time. That's why upper courts stuck their fingers in their ears and sung "La la la la la!"

Court challenges were not heard, they had no standing or were moot. Can’t hear what was never presented. FOH

Gosh, I don't remember any Democrat election officials (not a single one) willing to go under oath, or submit affidavits testifying that they ran a perfectly legit election in their jurisdictions, but I remember hundreds and hundreds of Trump voters that were willing to testify to fraud from personal experience. No court heard sworn witness testimony. We were cheated and ignored, but we'll have the last word...BELIEVE THAT!!!

If this was a clean election and knew confidently Joe won, she would never say this. It's an admission of guilt.

I don't have the Twatter. But that's a great idea!

That they needed to begin their statement with such words about something that should be a fact and not even open to interpretation should be enough to set off alarm bells.

The democrats have successfully created a world where information is in abundance, knowledges is at your fingertips, and the truth is within seconds of you actually wanting to find it, and yet they can STILL spew shit like that from a government official channel and she will never be called out on the blatant lie that it is.

"Our view is" is democrap legalese for "yeah this shits going to court eventually".

It throws me for a loop that these duplicitous fuckers have the gall to claim that election challenges were "fully heard" when everyone knows the major challenges were all ignored for "lack of standing" and being "moot".

The spokesidiot has a very lawyerly way of phrasing that.

We're going to have to build more prisons.

You would only say that if you knew the election was a fraud. Think about it 🧐

Circle back bitch can fuck right off. She makes my skin crawl.

"Our view" - sincerely THE LIBERAL COMMUNISTS!

still not denying it though

That’s reads like a playing dumb statement. To me it’s very docile not to provoke more than they already have.

THEY KNOW WHAT THEY DID!!