Win / TheDonald
Win
Communities Topics Log In Sign Up
Sign In
Hot
All Posts
Settings
Win uses cookies, which are essential for the site to function. We don't want your data, nor do we share it with anyone. I accept.
DEFAULT COMMUNITIES • All General AskWin Funny Technology Animals Sports Gaming DIY Health Positive Privacy
3296 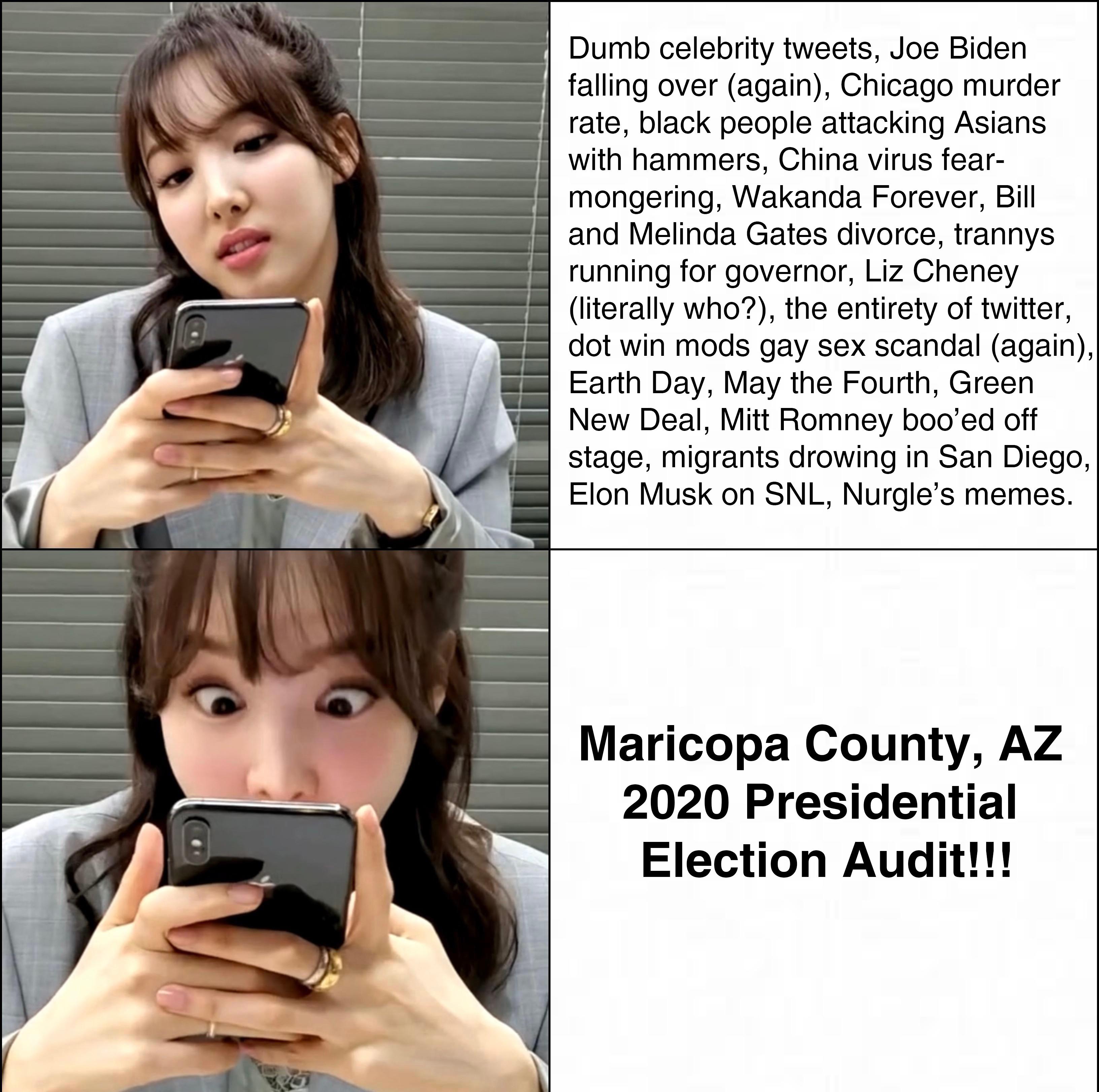 ...is it greased hamsters again, or did they find a new toy to use?

Same toy, just not removing the teeth and claws

No, you're thinking about the one they cover in sriracha sauce.

and, there are idiots that will be saying, "can't we talk about this?" while the commies rape and murder their families

Lemmiwinks or Raggot? If it's the latter, Mr. Gere had that thing stuffed in the late '90s after it died of natural causes.

Please leave us out of your fetish fantasies.

I'm picturing a bunch of greased up fat dudes eating turkey legs in an empty kiddy pool, surrounded by the FBI jerking it

What did they do?

CNN will know as soon as their writers can think something up.

we have the best gay mods

They deny all rumors!

Killing violent members of ANTIFA should also be a top priority for all Patriots.

that emoji is triggering to mods missing thumbs

All mods must have 100% of limbs. It is a a strict requirement

No bro. We commandeer Boston Dynamics and saddle up their bastard machines for our based cripples to ride. A lot of those dudes have been gaming hard. Enduring lag, low FPS, and last gen GPU's and CPU's with no current gen replacements in sight and they hold it together, keep racking up kills and they keep f'ing gaming. With the right hardware they would be like the Horse Lords of Rohan.

Is true, just some levity.

We commandeer Boston Dynamics and saddle up

Here's what happens if you do that.

So none of the mods have lopped off their dicks? Good to know.

I wonder if the thumbs up emoji could be turned into a 'racist' symbol like the OK symbol? It would be fun to watch the left go mad.

Is this what the scandal is about

That one caught my attention but went right over my head. I’m a simpleton, what’s the meaning behind it?

It's a joke just poking fun at the PDW mods.

u/Doggos was screaming "watch the audit" too hard and now has to have this removed surgically. https://www.pinkcherry.com/products/great-american-challenge-dildo

"Currently Out of Stock"

How you been, bud?

Stop being a gay weeb

"NEVER CARED FOR WHAT THEY DO"

"NEVER CARED FOR THINGS THEY KNOW"

SO CLOSE, NO MATTER HOW FAR.

Nayeon on T_D. I approve!

Oh, sorry. Yea!! Can't wait for nothing to come out of this "audit"!!! Is that high enough energy for you?

I will take that over the fake theatrics any day. Just wait, nothing will come out of this audit. The Biden administration is 10x more powerful than Trump ever was or ever could be. They have the Deep State on their side. Just wait. Setting my expectations low for a reason.

The Biden administration is a house of straw. Trump has Truth on his side. You have been demoralized but we will bring you back to the light, pede.

Getting that back is going to take a lot more than one term.

Demoralization is what Yuri warned us about. None of that allowed here!

No need to ask for clapping around here, believe me.

Trump got ousted, we have an illegal usurper with full power of the federal government, everything Trump did in the past 4 years has been undone, inflation is skyrocketing, Critical Race Theory is being forced down the throat of every child in America, millions are pouring over the border each month....yeah so much winning!

Except most of us know we lost the House Senate SC and Presidency.

We are not fucking winning, the mob violence won.

High energy got us out to vote in record numbers and attend countless rallies (I want to 6 and did other things too).

Then the system collapsed and a coup happened.

You can cry about it or you can dust yourself off and get back in the fight.

My last W was waking up this morning a red blooded american male living a good clean life free of fear and doubt and the absolute envy of the misanthropic homunculi on the left, justifiably confident of the restoration of American democracy through hard work and patriotism.

Republic. America 🇺🇸 is a Republic

Whoa whoa, no saying anything negative you bigot racist!!!

Sees a Korean in the meme...
Wonders why...
Looks at OP's username...
Ahhh it all makes sense lmao

Papa Nurgle did nothing wrong.

Didn’t expect to see Nayeon in a meme on here! :D

Ah! So that's who this beautiful woman is!

It’s OK to laugh sometimes. If we did away with everything else, this site wouldn’t exist

Hopefully, you're all able to cope with the occurrence of more than one event. If not, sad fucking day, but I assure you: things like getting Liz Chaney out of power are also important. That's why PRESIDENT TRUMP HIMSELF took note of it within the past couple of days.

The mods had a gay sex scandal? Do tell!

Me and you know who bunped rumps.

Damnit I didn’t want to contribute to the rona death count or become a dem voter :-(

100% let them be distracted. the Patriots are focused on what matters most. The votes.

I member that. He killed 2 male-prostitutes and overdosed a dozen more, it went on for 2 years after the first fatality was disregarded despite the victim's diary having incriminating info on Mr. Buck's kink for injecting him with meth. West Hollywood police and local "law enforcement" gladly overlooked Ed Buck's crimes, because he is an openly gay DNC MegaDonor with ties to many state and local career-politicians. (Reportedly Adam "Schiffty" Schiff visited Mr. Buck's drug-den 14 times, coincidentally the approximate number of overdose victims found there. Schiff has also been said to attend Buck's fetish parties, and was seen on one occasion in an Egyptian costume.)

14 or more overdoses, 2 fatalities, and nothing was done to interfere with Ed Buck's hobbies until a victim escaped and contacted an outside law-enforcement agency. Currently, Mr. Buck is locked up pre-trial awaiting his presidential pardon from Biden or Kumala, depending on how long the unpleasantry takes to blow over.

> There were no riots in the name of Gemmel Moore nor the other victims.

In Nurgle We Trust

Bring back Based Julia!

I've seen that look before.

No, that was the dic pic I sent her

She's still trying to find it.

mail in votes were mostly fraudulent

I wouldn’t even be here if I didn’t believe the Trump already won. My only question is how much did he win by?

Papa, where is uncle Khorne at?

Must be too boocoo.

Trust I seek, and I find in you.

Everyday for us something new.

Open mind for a different view.

Does that make you the 2021 version of the guy that watches his wife getting fucked?

The results are so close, no matter how far away. Couldn't be much more from the heart of the matter. Forever trusting that the fbi are fags. Only the audit results matter.

It actually doesn't matter. Election fraud was already proven, and nothing happened. If this audit shows fraud, nothing will happen again.

That is loserthink. It absolutely does matter. We must chip away at their narrative and a full audit achieves that. No, it is not going to result in Trump magically being given back the presidency, but it will cause people to put pressure on states to fix their fucked up election laws.

it is not going to result in Trump magically

I can't see any negatives that can come from it if fraud is found in the level we think. I don't think Trump magically gets the presidency - but I don't think Burma thought their fradulent Soros pawn would be overthrown by the military.

Who knows what will happen - All I know is more evidence is always a good thing. Especially if it leads to more questions being asked, and more people waking up. Perhaps more audits happening.

Ehhh while right this kind of proof is a lot more tangible and hard to ignore for most people. The other proof was too hard for biased people to accept. Half the ballots being filled out by a printer or something like that? Ya, that will be hard to slide under the rug

Props on using an Oriental model. 😁👌😍

May the fourth be with you.

When I lived in China many a girl had that look on their faces. They were looking down, but not at a phone

Nice! What region of China were you in?

Nanning in the south next to Vietnam