TheDonald
Communities Topics Log In Sign Up
Sign In
Hot
All Posts
Settings
Win uses cookies, which are essential for the site to function. We don't want your data, nor do we share it with anyone. I accept.
DEFAULT COMMUNITIES • All General AskWin Funny Technology Animals Sports Gaming DIY Health Positive Privacy
1247 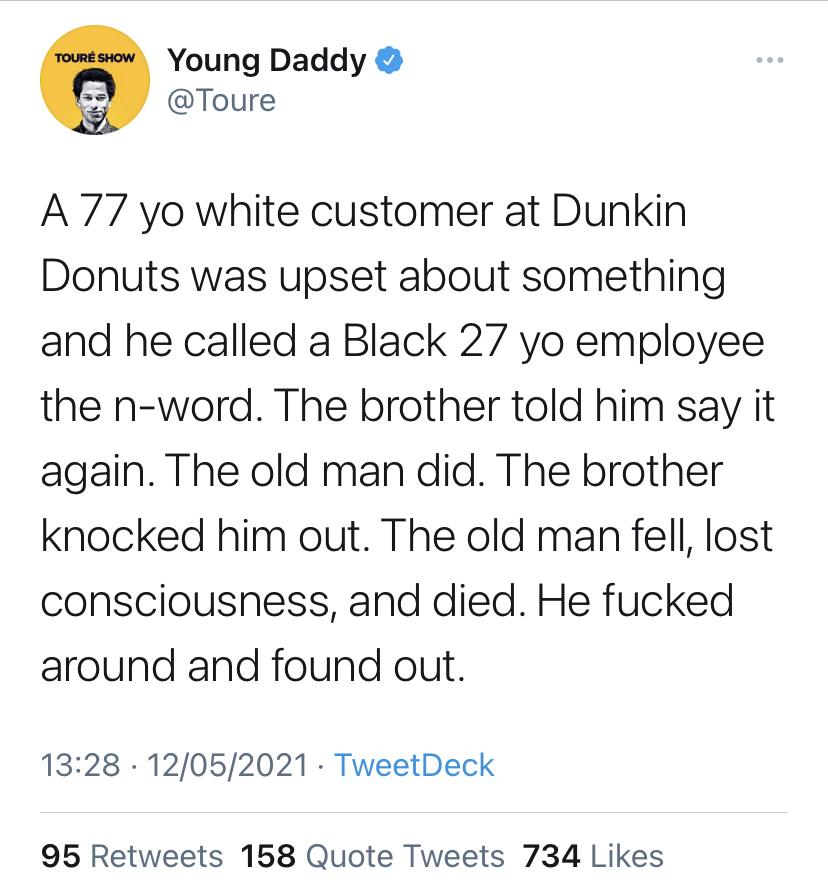 there was zero mention the "n" word in the story or the police report. the murderer said the old man touched him but the video proved him a liar.

And they will always say someone called them the 'n' word like it's a free pass, and apparently it is. Like that attack on a store employee in NYC. Claimed he called them the bad word but he was not even aware of them at the time.

the Nword is a free pass, it is a magic word that casts a spell on people that makes them lash out with violence. you cant fight magic

I don't thing the word should even be restricted.

Mr. Toure just fucked around. He will soon find out.

Take care not to be consumed by the Evil you endorse - or abhor. In the 2020s, EVERYONE gets a Humility lesson.

If there's anything I've learned in the past year, it's that blacks get away with way too much in this country.

Leftists believe that words justify violence. I’ve actually had this discussion with a local leftist. These are evil people.

But the n word has historically been associated with--

But accusations of racism right now are associated with people being assassinated in the streets and having their lives utterly destroyed, and then calling them a racist again afterward makes it okay that you ended their life for no reason.

So if you call me a racist, I get to beat the fucking shit out of you.

That is the truth.the time for moral arguments has expired a long time ago.

You thinking about the Flint Macys?

I felt bad for the guy, did nothing to the friend of the guy filming, kept apologizing and writhing on the floor and the attacker didn't let up.

I felt less bad when he chucked out and pled for a lesser sentence for his attacker.
https://nypost.com/2020/08/14/michigan-macys-employee-beaten-requests-leniency-for-attacker/

No this is Murder not manslaughter

So wait, you’re telling me the guy acted without impulse control and made a poor decision?! That is SO surprising and not totally a characteristic of the assailants demographic...

Say the word. Pretending that it is taboo to say gives these cowards more power

Send fuckers like this into War-Torn Africa. We'll see how fast they start begging the "White Man" to come save them.

Ha, no - they'll either be enslaved (For real), and tossed into a mine by the local warlord, or sold to some Arabs.

If not that, they'll more likely end up gunned down in a matter of days for being the wrong kind of black.

"Real" Africans are still very rooted in their tribal ways - eg, they won't be welcoming outsiders, you see that shit on full display in Chicango, Deadtroit, and Lost Anglish. Block to block is basically Tribe to Tribe; you don't cross this street or that street unless you're starting a tribe war.

You don't have to go far. Just make them more uncomfortable and they will be crying to the gobmint for a handout.

When I was in grade school, we used to say, “Sticks and stones may break my bones, but words will never hurt me.”

Now whenever anyone In an oppressed class gets their fee-fees hurt, they resort to violence and justify it by arguing that the words the other person used was actual violence

why dont you believe in magic? trust the magic

This is true. Leftists really believe that they are not just justified, but morally required to use violence against their political opponents. This is why they support Antifa and constantly talk about “punching Nazis”.

I just realized what you did there. Goood correction!

Hopefully we still have the right of self defense in case someone decides that words deserve violence. However, in some jurisdictions, you would not be able to claim "self defense" for defending yourself from an attack if you did something to cause the attack. (For example, you can't challenge someone to a fist fight and then shoot him for punching you.) While I don't believe that saying the epic gamer word leaves a person with no choice but to violently attack you, I'd be curious how a court would rule on such a situation.

Unfortunately, courts clearly have no problem ruling out of fear of, or loyalty to, Black Riots Matter and other marxist gangs.

Lol imagine being such an animal that being called a name makes you forget that you're trying to fit into a society.

But they are NOT trying.

I have some bad news for you, they are.

If I was black, I would be ashamed too.

I do believe they get pissed every time they look in a mirror and see black skin. I truly believe it is all they can think about when looking in a mirror. That psychological fact is something that cannot be fixed. And to be clear, this psychological anomaly has nothing to do with “their history in America”. It has to do with the fact they are freaked out by what they are. HOW DO YOU FIX THAT?? You can’t.

Douch'e is one of the biggest sjw's alive. If anyone said anything to him, in person, he'd immediately drop to the ground and scream like the bitch he is.

Sort of like if you cross the border illegally... oh wait... forgot the rules were different if you "MIGHT" vote for demons.

"The third main type of second-degree murder occurs when a victim dies as a result of the perpetrator's extreme indifference to the value of human life. Generally speaking, extreme indifference means an utter disregard of the possibility that an act will kill someone."

EDIT: I looked up third degree murder, and realize your charge would probably stick better.

Yeah, it's a pretty simple distinction.

1st: Intended to kill the victim before the encounter

2nd: Decided to kill the victim during the encounter

3rd: Decided to harm the victim and didn't care whether he lived or died

Manslaughter: Wasn't intending to harm the victim but didn't try to prevent it either

Sticks and Stones will break my bones, but the N-Word will get me 20

Also a hate crime. He wouldn't have killed a black person who called him the n-word, therefore he was racially motivated in his attack

this checks out - OMG - deboonked.

They only pick fights with the weakest or have the majority in numbers.and yet always the victim.

The Chinese and Jews might use propaganda on them but they don’t care about these two groups in their country.

So why aren't rap albums like the video tape on The Ring. You listen to 1 song and that word is said like 20 times. So shouldn't you go kill 20 people when you hear it?

and ignorance is no excuse

It's murder and the animal needs to be put down.

I guess they don't teach in critical race theory that you're not allowed to murder someone over bad words. (Which is probably bullshit made up story in the first place to justify it)

A 77 year old black customer at Dunkin Donuts was upset about something and he called a white 27 yo employee "wipepo".

The Bible says thou salt not murder. Not except if you heard them say a racial slur

That's the only single word in the dictionary that will cause a small % of human beings in earth so act like wild animals.

There is no other word you can think of that will make someone snap so easily.

It must mean they hold lots of anger and resentment still.

If they actually wanted people to take the word being offensive seriously, then stop using it constantly.

It's time to deport those living in America who cannot score high enough on an intelligence test. There is no doubt this boy was getting his life together, going to church and the what not. It doesn't matter anymore, we simply cannot have a society full of retards.

But isn't brother a gendered word, worthy of violent retaliation? Asking for a friend.

this guy literally killed An old white guy because he said the Nword does that mean it’s a hate crime? Had the old man been black the guy most likely would have not hit him. This is a hate filled murder.

This must be the "white fragility" narrative I keep hearing about.

No worries. Blacks aren't punished for breaking the law. That would be racist.

Funny how so many luke warm IQ tards think called a name warrants punching an old man. WHO HAS FRAGILITY ISSUES?

When is the young black man going to be hanged? I heard we live in a systemicly racist country so surely that's what will happen.

Depends, was the deserving subject of a certain race that qualifies him for such a privilege?

Negros think that certain words justify a chimp out

Do u want some1 to start hating u for something as silly as this. Well this is how it starts. On what pedestal are these morons touting this from. Every1 is suffering in every manner as these idiots.

They ARE allowed to. Hell, they can burn cities down whenever they feel like it.