TheDonald
Communities Topics Log In Sign Up
Sign In
Hot
All Posts
Settings
Win uses cookies, which are essential for the site to function. We don't want your data, nor do we share it with anyone. I accept.
DEFAULT COMMUNITIES • All General AskWin Funny Technology Animals Sports Gaming DIY Health Positive Privacy
2800 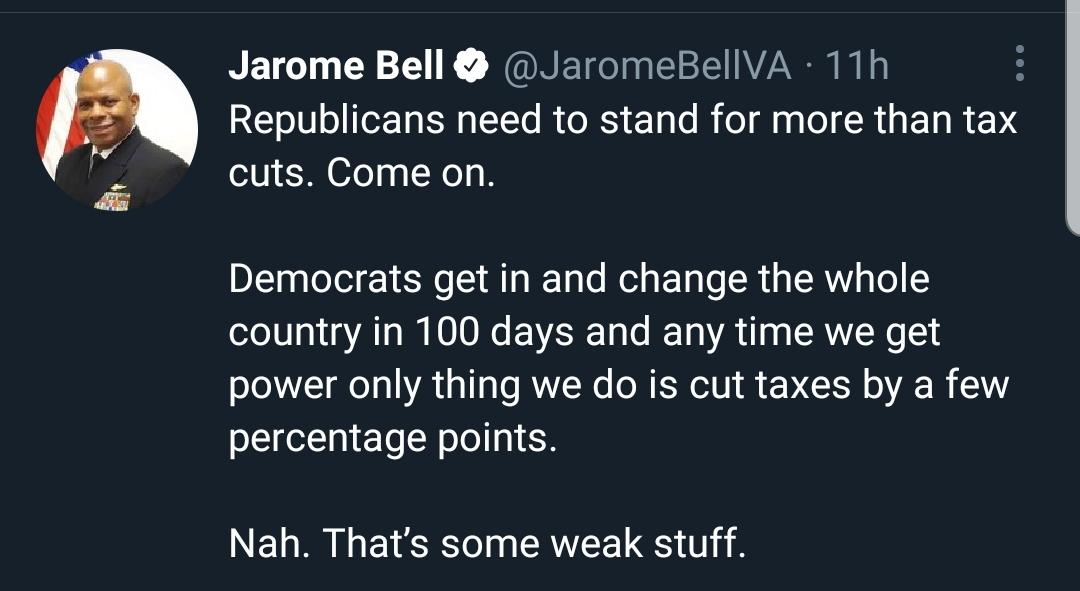 They literally just did this as well. Even the fucking grifters like jewpiro are at it(it's their source of income).

They are corporate shills and military warhogs, nothing more.

They really should just be called anti-democrats. They don't stand for anything other than the fake illusion of being against the democrats.

Yeah, these days I almost have more respect for the Democrats, because even though they're a bunch of psychotic bullies, they back each other up and stand up for what they believe in. The current Republican party is the most weak, pathetic, limp-dick bunch of cowards I've ever seen in my life. All it takes is an angry Twitter mob for them to fold on their so-called morals like a cheap suit.

Even Trump has said that Dems strength is that they stick together. I've seen that alot in local politics as well.

most of them don't believe in shit though, if you put a gun to their heads those weaklings would fold like a wet napkin. Especially the democrat leaders, they don't believe in a single damn thing they spew from their mouths. Ever seen one of these self proclaimed marxists offer up the majority of their paychecks to someone in need? lol

No shit Sherlock. It's well known that the elites are aware of reality. But they profit from the illusion.

most of them don't believe in shit though, if you put a gun to their heads those weaklings would fold like a wet napkin. Especially the democrat leaders, they don't believe in a single damn thing they spew from their mouths. Ever seen one of these self proclaimed marxists offer up the majority of their paychecks to someone in need? lol

Yes! The Dems are full of shit. But they do work together.

That makes a lot of sense. The Democrats are just a group of people playing politics as a team sport. As long as their group "wins", they don't give a shit what their actual policy is. My friend questioned the local city council on why they wanted to ban natural gas in new construction and they just responded with some BS about racism. Every time you ask a Dem at any level to defend a specific policy, the answer is always some convoluted bullshit.

People still believe we have a two party system? It's going to be a real shock when they realize there is no two parties but a uniparty.

Hmm Trump did a good amount of structural changes, started the wall, military funding, renegotiated trade deals, kicked off a cold war with China along with the lower taxes.

And he got hamstringed more than any president in history. You can’t just vote for rino cucks at the local and state level and assume one man at the top can get anything done.

Especially surprising is the ISIS surge is West Africa within such a short time. Taliban is back in Afghanistan too.

He is so right.

4 years in the White House and we didn't do shit.

You can’t do shit when the house and senate is dem controlled.

This. Unfortunately the rot is deep and unless we starts jailing/executing traitors on both sides it won't matter.

Actually Trump did surprisingly a shit ton with all odds against him. This is why every establishment politician wanted him out more than anything in the world.

"conservatives are the handbrake on progressives"

"Conservatism is progress going at the speed limit"

It's all the same weak shit. We need to reverse this bullshit.

Fill in any office he's eligible for. He has my vote.

There is no such thing as the Republican party

We need to get wins on other issues, not just tax cuts. Who cares about tax cuts when your neighborhood is full of BLM criminals?

Republicans need to be about amending the constitution

Since they are scared of death...

Easy explanation: Rino cucks are the "pressure relief valve" for the population when they start to boil over at the democrat commie tactics. Vote them in, and they will keep the temp from rising. They just don't lower the temp; they come up with fake reasons why they just don't have the votes or we voters need to "temper expectations" for them. Which inevitably leads to getting tired of their shit and the commies come back into power. The cycle then repeats.

Now say that the 2020 election was stolen.

Screw you buddy! Only thing we do? https://trumpwhitehouse.archives.gov/trump-administration-accomplishments/

What Trump accomplished would have been incredible if he had congress 100% behind him. The fact that he did it with every part of the federal government fighting him is insane.

any lasting conservative causes that weren't reversible with a stroke of a pen by Biden?

Trump needs to break from the GOP.

No, let’s just steal it from them- more gratifying

Thank you! The same is true for any secession. Rome didn't fall. It fell apart. Don't be Rome. Keep what's been earned.

And they can’t even fucking make them permanent so that the Dems need a super majority to overturn them and raise them. M

Guys a fuckin moron prior to these “faux” hundred days, there were 4 years where more was done other than just a few percentage points cut off of taxes.

This guy can suck my dick

Make Bureaucrats Unemployed For Once, if not permanently.

Yeah we should cut taxes by 50%. Suspend all military funding until the border is at zero crossings for one full quarter. Suspend all welfare programs until at least 1,000,000 of the 20,000,000 illegals are tracked down and removed. So many easy wins here.

Republicans? You mean the party that does fuck all except cry and back stab eachother?

Let's face it, they don't want to win. They make more money fund raising and complaining like losers with no actual intent to win. Fuck them.

Man I just told a liberal coworker this the other day. I’ll give you democrats credit for one thing, when you get in power you don’t fuck around. Republicans just fight with each other

Traitor Party traitors with the Dems.

There's a reason: because when people "get to keep" more of their own money, the invisible hand of the market fundamentally changes society. That's why the Republicans have found and are laser-focused in on the main and sole thing that drives culture: keeping your own fucking money.

RINOs. RINOs as far as the eye can see.

This is as planned.

The great thing about this sham government is that now they've set a precedent. You can win against cheaters. You can't follow the law under the lawless. You can't argue morality with the immoral.

Sounds awesome but you can’t do 27 years and retire as just a Chief Petty Officer so...

He's got my vote!

They could stand on exposing the stolen election, except that method put many of them there

The RNC is the Washington Generals against the DNC Harlem Globetrotters. They pretend to compete but you know they will surrender at the end

...because the RINO and old guard GOP are also in on it...

That's cause it's a uniparty. Republicans jpo is to whine about dems( whose jobi is to destroy the country as fast as possible) while doing the least amount when they get installed.

It's one big farce

He’s so close to figuring it out.

Does this man support Black Lives Matters. Let's get that settled before any fucking advice is thrown around? Is he ready to hold these fucking terrorist accountable or is he suggest forgiving "his" people. You better come at me straight if you are throwing advice motherfucker! I don't fucking trust you!

But... we’re against big government. That’s part of the point....

I'd rather live in a socially conservative society with high taxes and tyrannical government than a small government county full of woke LGBT trash.

35% to 21% is more than a few percentage points and is probably what supercharged the economy and gave us record Trump percent unemployment.