TheDonald
Communities Topics Log In Sign Up
Sign In
Hot
All Posts
Settings
Win uses cookies, which are essential for the site to function. We don't want your data, nor do we share it with anyone. I accept.
DEFAULT COMMUNITIES • All General AskWin Funny Technology Animals Sports Gaming DIY Health Positive Privacy
2579 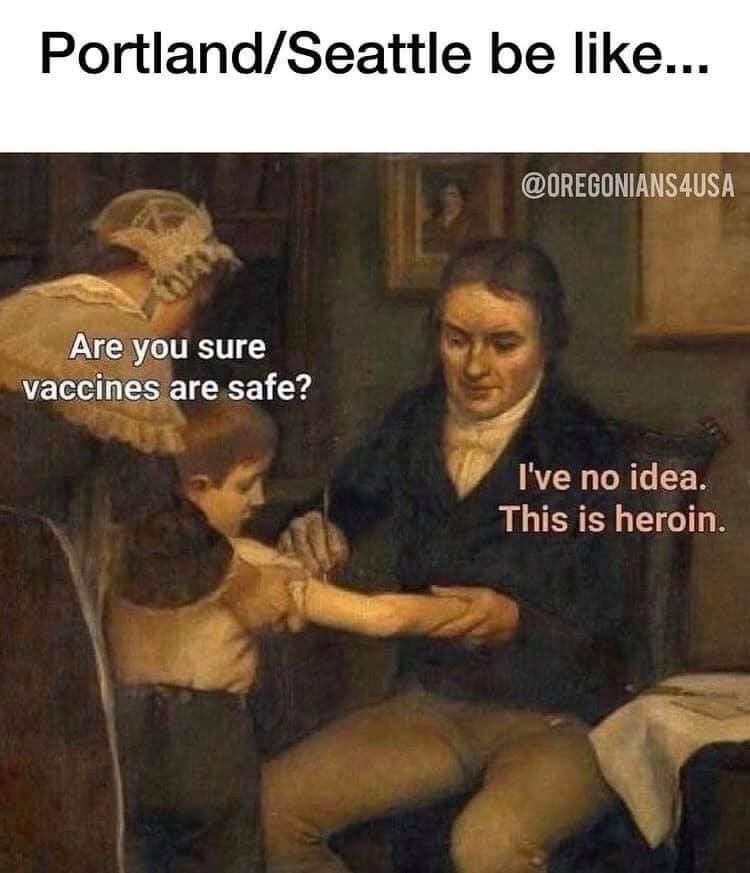 As long as it's not MKUltra. You came close there

Relax fren, you're in good company.

Idk if it’s like this elsewhere but the retards in Seattle just can’t stfu to let you know they’ve been vaccinated. Those post it to their social media and bring it up in casual conversation like they completed a marathon or something

I had a stupid liberal at work bring it up out of the blue, and I quote, “I got both shots, it’s great isn’t it? You feel like you won the lottery!”

easiest lottery ever... they throw the prize at you

Aw, I was hoping for fatal blood clots...

The lucky winner(s) will win a FREE death!

Just as a side note: Heroin is actual medicine, the vax is not.

The point still stands. Heroin is one of those 'medicines' of yesteryear that physicians prescribed when all else fails. It is embarrassing to realize that the vaccine is being used blindly while Fauxi crosses his fucking fingers.

Actually, real medical heroin is still used in lots of countries, like the UK, and has an excellent safety profile when used properly. The issue is that it rapidly creates a dependency. In the US, they prefer either fentanyl or hydromorphone as a first-line treatment, which is ironic because they’re both a LOT worse than heroin.

Saint Floyd has entered the chat

From Oregon and lived in both cities.

I moved from there to the great state of Oklahoma and locals think I'm the crazy one for leaving there. I'm amazed at how many people actually don't realize the West Coast has become a giant dumpster fire.

What... I thought the rest of the country already knew that the West Coast has turned into shitholes by now...

And fires. Whether in dumpsters or not.

i guess the media is doing a better job than we thought of cover thing crap (literally) up.

heroins safer than the vaccine.

Meh depends on where it comes from tbh. There might be worse things lurking within the combination of both a chinese and mexican illegals assholes. Dont even get me started on the stuff made in mexico

The black tar heroin can very wildly in quality. Some of the lower-grade stuff can be downright dangerous because they’ll half-ass the manufacturing process and use shitty catalyst ingredients. It won’t even smel like vinegar sometimes, just like something toxic. But most addicts don’t care, as long as it gets them high, what’s an abscess here and there? Sad!

wait... can we microdose the vaxx?

Why's this marked as NSFW?

Depends on where you work. I thought it might be a tweener, based on a lack of 1st Amendment freedoms in some workplaces.

Hey I live in Portland and I couldn't agree more. bahahaha .... moving next month!!!

Kid is safer with the heroin

Bless you. You've got to have such a sense of humor to live in Oregon. We pray for you.

The way this shit has gone on, I wouldn't be surprised if this whole vaccine bullshit isn't just loading some sleeper cells into people.

First, consider there's 3 or more variants of the vaccine, that's at least 3 different concoctions. 3 different ways to swing the hammer. Never before has this happened, the polio vaccine is the same across the board and it's made to specific standards. This Coof bullshit vaccine is all over the place, every other major drug maker has their special "tonic."

Now let's get back to sleeper cells and BIG PHARMA with their ointments. Big pharma is easily swayed by big government to come up with a way to administer their medicine via copious amounts of money. Remember the jabs are free to anyone that wants it, yet I'm pretty sure I had to pay to have my kids vaccinated for polio?

So the question should be, but it cannot be answered because big pharma is immune from disclosure. When these sleeper cells activate. Are they for protection against something more horrid than the flu, or do they aid in getting rid of bodies more quickly?

Just a (not so) quick point. the polio vaccines have not been standard across the board. There was salks, then sabins. The oral one was actually causing polio and was banned in the USA, so we shipped it off to 3rd world countries. Where it's still used (and killing children) today. Vaccine-derived polio infections are exclusively why polio cannot be eradicated.

Studying the polio vaccine rollout makes it clear that these health agencies have done this shit before- right after polio vaccinations started they changed the diagnostic criteria for polio. the change resulted in like a 90% drop in polio diagnosis, which would've happened with or without the vaccine, obviously. Acute flaccid paralysis cases went up when polio went down. There's still a correlation today.

I don't have all the answers but my theory right now is that they never got rid of polio, they just renamed it. That the epidemics were actually a result of the pesticide DDT. (Explains why specific regions, especially near apple orchards were effected, and why it hit in the summer which is very uncommon for viral illnesses. Also it seemed to hit only upper to middle upper class white families, at least at first. They were spraying children's rooms with ddt, saying it was safe to eat, etc. The symptoms of ddt exposure are neurological and paralysis. Ddt was banned later, then polio declared eradicated in the USA.

Despite other viruses making a comeback, supposedly because ppl aren't vaccinating their kids, (that's the excuse they use for whooping cough, measles, chicken pox, but when u look into the cases over half are people who have been vaccinated- which means the vaccines if they ever work stop working at some point. Which they've admitted now.) Polio has never come back, even tho other regions struggle with outbreaks.

Unraveling the polio mystery is key to figuring out how these evil people work. Read dr Mary's monkey. The cancer viruses that were in the polio vaccines have been injected into over 100 million people. Cancer sure has exploded since the 40s and 50s... I think they've been practicing low key eugenics and soft kill weapons for decades. the autism epidemic is another case, which has been very attacked as "anti-vax conspiracy theory" despite court cases, settlements, and vaccine inserts acknowledging the link.

But yes, this covid shot snafu is gonna bring lots of problems- the problem is I'm afraid they'll just keep covering it up and calling us crazy for worrying about it. If there's not a mass die off from Antibody dependent enhancement syndrome, then i expect alzheimers in 40 yr olds will drastically increase, Parkinsons too. Heart attacks and strokes skyrocket. Theyll just refuse to acknowledge it. Oh and sterility and miscarriages will hugely increase,, while sperm counts continue to plummet.

Random fact- did u know a us navy carrier had a mumps outbreak on-board, causing them to quarantine for months? But the crew was all 100% vaccinated! They couldn't get rid of it, despite administering new rounds of mumps boosters even. Pretty interesting, right?

Did you ever see information on the correlation between the polio vaccine and HIV? There was a documentary on this, but I couldn't find it to a quick search. I did find these:

Polio vaccines and the origin of AIDS

US rethinks link between polio vaccine and HIV

Thanks for more insight, I have a layman's grasp of most things medical related and I don't trust the industry.

They're killing as many of us as possible. Tons of evidence for this. We should return the favor

At least with heroin the negatives are well documented.

I thought it said “vag clinic.”

So glad I'm gone from that hellhole. Texas is fucking badass by the way.

They’d never give their heroine away to someone else. Fake news.

Don't worry it's the same amount od fentanyl George took and it didn't kill him right?