TheDonald
Communities Topics Log In Sign Up
Sign In
Hot
All Posts
Settings
Win uses cookies, which are essential for the site to function. We don't want your data, nor do we share it with anyone. I accept.
DEFAULT COMMUNITIES • All General AskWin Funny Technology Animals Sports Gaming DIY Health Positive Privacy
2590 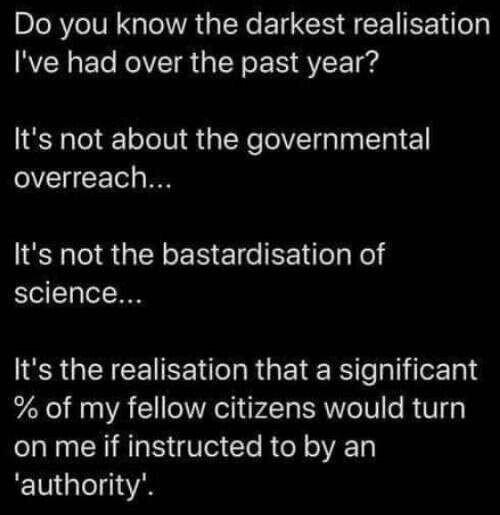 Not me, l can honestly say l knew. My wife always called me anti-social because l had very little faith or trust in people. Now she sees why.

The smartest will keep to themselves and keep their opinions hidden. Oh and they will burn down the informant's houses in the middle of the night. That's not speculation but an actual incident from the French Resistance.

The owner of the biggest night club in my city said, screenshot any people saying "how dare you" or "muh covid" and that they would never be allowed in again :) its a blue city in a red state :) no one wears masks anymore, no one gives a shit about coof anymore, everyone is ready to get back to business.

How absolutely dare you!

The Matrix is a system, Neo. That system is our enemy. But when you're inside, you look around, what do you see? Businessmen, teachers, lawyers, carpenters. The very minds of the people we are trying to save. But until we do, these people are still a part of that system and that makes them our enemy. You have to understand, most of these people are not ready to be unplugged. And many of them are so inured, so hopelessly dependent on the system, that they will fight to protect it.

Exactly why I promote SECESSION.

Just get new ones.......Somebody is the betas

The Milgrim Experiments showed this a long time ago

The Government now knows it can count on an army of Sheeple and Karens to enforce their will.

Mayors telling people to call tip lines when they see someone "breaking the rules" is some Stasi shit.

Wait until they find out about the Milgram Experiments

Came here to say exactly this.

They've studied us and know what works on the masses, we are outliers

And ::::: Everything else is just the Asch Conformity experiment in real time.

Go raw dog on her. She loves you

Your own friends and family will sell you out "for your own good," and they'll happily give up their freedom for the illusion of security. It's been heartbreaking to watch people I like go along with it without any resistance.

I have cousins like that. Haven't heard anything from them in over a decade. But all it would take for my own mother to help the cops to find me and forcibly vaccinate me is for them to stick a bum in a lab coat and pay him to say it's necessary. She'd do it with the best of intentions and never question it. It's difficult to have NPC's as loved ones, even during normal times.

Only family I had left was my pop. We'd have both died before allowing anything to hapoen to each other. He passed over Christmas holiday so now it's me. No family to worry about.

there are people who would do it for $5

5 bucks? They would do it for free, look at all the videos of mask nazis attacking people that did not wear a mask, nobody paid them to attack them, they did it happily for free.

Not true, comrade. Those videos earned them their woke virtue signalling facebook points which boosted their Social Credit Score.

Yes he was. He said "it was a very happy making time."

He is a disgusting and vile man. The left worships him, even though he is the monster they claim to be against.

One could say he was only 14 at the time but he doesn’t sound very remorseful, as an adult, looking back (fast forward to about 6:58) https://youtu.be/npvHhGZTSXo

And they would don it for free, too. Imagine if the dangled a carrot on a stick or otherwise incentivize them to turn you in. Especially with the slow creep of scarcity. There are people who will march you into a boxcar at bayonet point for a roll of toilet paper.

It’s honestly terrifying. I realized I can’t trust my neighbors. Need to move out to a small town.

Same. It's like hopium to think things will get better, naturally, or at the ballot box.

MSM continues to be a couple years behind us with what's going on. People have been sounding the alarm about the marxist for a long time and look where we are. The DOJ and military are infesting themselves with communist doctrine as we speak.

The ideological marriage between our institutions and corporations is blatant, flamming fascism and they are too stupid to realize it. Too stupid to fight the fraudulent election.

Biden was gonna win whether anyone voted for him or not and the few that did vote for him think theyre the majority. The mob rule. The popular choice. Biden couldnt fill a Mcdonalds parking lot.

This is a direct result of a significant portion of the population having never been punched in the face. A good beating improves manners.

You'd be surprised how resilient the evil plasticity of mankind is.

The people who scare me the most are those who obey the government when it tells them not to see their own parents or children.

Sorry. I had no idea. Thanks for giving credit where credit is due.

But the good news is, you realize this before it's too late. I, too, am puzzled and frightened by this realization but I am not surprised.

80% of people would turn you in if an authority figure told them to.

Zuby was the author of this, no?

I'm not sure, but I wouldn't doubt it.

Honestly, that is not a dark realization. That is just someone coming to terms about reality. Dark is accepting and letting it continue instead of doing something about it.

Your "fellow citizens" will be mentally programmed to not only turn on you, but to attack you. Watch this: https://www.youtube.com/watch?v=19vXzPPfkrc&t=460s

DUDE! The timing is incredible. I just dealt with more of this nonsense this week. My fucking neighbor/maintenance man, who was sane until a few days ago, was told to make my life difficult. Then out of the blue flipped out. Not being the smartest dude I couldnt help but squeeze in a little fun while destroying his argument. It sent him spinning then Fake challenged me to fight me as he quickly backed up getting louder as the distance increased. Now it's stupid shit everyday. All this because his boss told him to. WTF!

I'm too close to Philly

That's why they're defunding the police and weeding the non-marxists out of the military.

One of my coworkers yesterday was making fun of a guy wearing a 1776 shirt, saying if the government wanted to come take his gun he would 100% let them have it because he has a son and doesn’t want to die.

Fucking idiots, made me realize he’d fuck me over if given the chance to tell the cops about my firearms.

I forget who said it, and I'm paraphrasing heavily here, but someone said that people will commit all kinds of terrible acts upon one another as long as they're convinced what they're doing is righteous.

Round up all the anti-vaxxers and put them away in camps, it's for everyone's safety after all!

These people are sheeple who are our enemies. Once this facade of a regime collapses they’ll pucker their assholes tightly and try to be quiet. Don’t let them. There’s no forgiveness for this level of fuckery.

You asking what would happen if the globalist pedos actually directed their subordinates to turn on Americans?

No. The OP is about regular people minding their own business, not a global cabal of pedos.

Think about it, they own the media and the schools, right? Where is scientific research done and how do they tell the world about it? They manipulate "science" to their advantage, just like the UFO stuff. Whether aliens exist or not, they are never transparent in investigations of events, never let the public see the experiments or discoveries, and publish limited and often redacted data when it fits their model.

Have turned on you.

Those "fellow citizens" are actually anything but.

Imagine that scenario with an additional 35k trained army troops all around you (low estimate of 70% of the base left supporting). I came to this same conclusion a while back especially after the shit storm of March 2020. I'm stuck behind enemy lines boys & girls, so not a doomer just a realist. I stand ready, doing what I can in many little ways. If SHTF know I'm going out standing.

This has always been true.

100%. We are savages in suits. If you tear up the foundational values of our society you’re left with savages unable to buy suits. Back to square one. Globohomos and glowies knows this very well.

Democrats are communist traitors. They're not Americans.

Of course the people are the problem, they elect all of this scum.

That’s why it’s important to be the authority. And what’s scariest is it’s not even really the govt. the dumbasses are mostly listening to propaganda sources. Being in high journalism positions is important.

This’s why we need to restrict the vote to net taxpayers, i’d Like to have fewer plebs & useful idiots in the voter rolls thank you.

It’d also stop the death spiral of incentives for giving more welfare, since those who campaign for and give more, lose more voters.

Oh and ban those who can’t pay their fair share of taxes from donating to political causes, orgs, lobbyists. You shouldn’t be donating to anyone or anything Since your too poor to pay your way!

and apply welfare, grants and favorable loans and tax breaks given to businesses against all the stock holders and owners in deciding who’s a net tax payer. that’d Be great, really great, instead of a stock price surge on a company receiving a desperately needed bail out, you’d have a number of stock holders selling to keep their vote, with the more apathetic others losing their vote.

This is where I can agree with 'stop snitching' culture

What scares you the most is you can't trust the public?

Meaning you want to trust the public?

What planet have you been living on? We lock our doors here and when we go to the ATM, we look if anyone's behind us.

This is chilling and true.

Zuby’s wording from a tweet a few weeks ago.

it's why i'm leaving my job for a new one.

Wasn't it Zuby who said that? If so, credit where credit is due, find the attribution.

And some of them could even be family.