TheDonald
Communities Topics Log In Sign Up
Sign In
Hot
All Posts
Settings
Win uses cookies, which are essential for the site to function. We don't want your data, nor do we share it with anyone. I accept.
DEFAULT COMMUNITIES • All General AskWin Funny Technology Animals Sports Gaming DIY Health Positive Privacy
1251 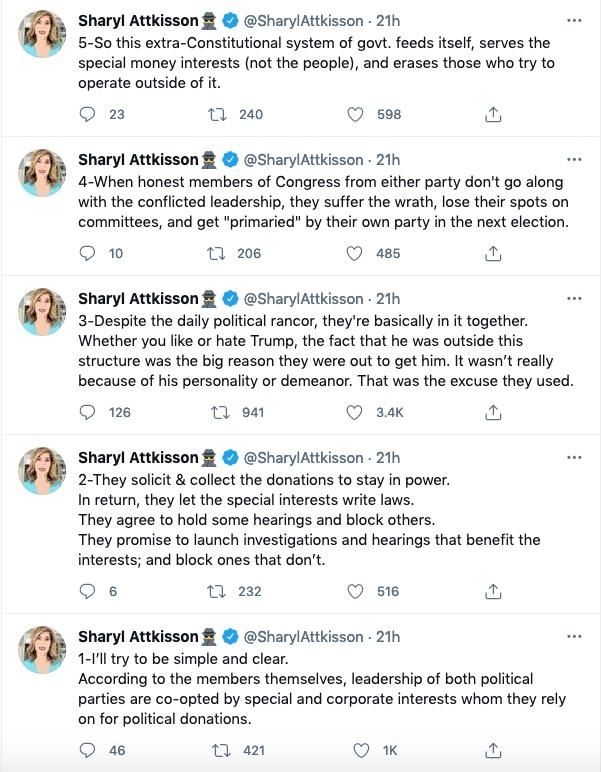 Yes, Sundance has been saying this for years. Sharyl did a great job explaining in simple understanding terms. Once you see the strings, you can’t unsee them.

The spoils system was a better idea than the special interest system. For those who don't know, before Federal employees in the bureaucracy were permanent employees, every time the presidential administration changed, the new president would fire most of the bureaucracy and put in his own people. This became known as the spoils system because the bureaucrats would jockey for spots in the system before and after the election. By trying to rid this system from the Federal government, we've created a uniparty bureaucracy that aligns itself with private sector moneyed interests and our politicians "fake" argue with each other while tearing the country apart along partisan lines. Meanwhile, our high level bureaucrats seemlessly float between high salary jobs in the private sector and high level bureaucratic positions. It's the bureaucracy that liaisons with the private sector business and presents the insider trading opportunities to the politicians. All of this is rigged against the American people with the Fake News media manipulating us by manufactured consent and agitprop. D.C. needs to be shorn of its power and its money. The bureaucracy needs to knee capped. The Fake News media needs to crash and burn. We need to hold our politicians responsible for decisions they make....and more importantly, how their spouses and family profit off their names.

One of the first things Mike Pence's family did when he came into the VP office, was showcase their daughter who wrote a children's book about a pet animal. That was the second indication Mike Pence was going to ride the Uniparty gravy train. The first indication was when Mike Pence did what Obama requested of Trump, that is, to make sure Gen Flynn wasn't part of the Trump administration.

Always has been this way, probably will always be this way.

until we get term limits on congress. At least the special interests will have to work harder to corrupt a new batch of congressmen every couple years; during the first few months before they are irrevocably corrupted, something might get done that is helpful.

I truly believe this is the easiest, most practical solution to so many problems. The 2 or 3 good ones out of 535 are not worth it compared to the dozens of decades-long serving swamp creatures.

Agree. I would trade Rand Paul to get rid of Pelosi and Schumer.

Vote in primaries for who Trump endorses.

Consider joining the group responsible for finding candidates so you influence the choices offered. Many savvy MAGA Republicans already have.

It’s time to reverse the tables and primary all the fucking do nothing republicans.

It's very much about the fundraising system and not upsetting it. Oddly enough a lot of the payoff for the politicians is the thrill of winning an election or re-election, not so much the salary or power but more of an egotistical thing. They would prefer it's not a win by election fraud, but they'll take it any way they can. It's like the roar of the crowd for a WWE performer. It's like a drug. Not so much an MMA fighter because they're going to war.

Washington warned us against factions. There shouldn't be parties.. just representatives selected by their district as their own person and Senators appointed by state governors and confirmed by state legislature.

But the 2 parties have built up so many 'rules' that rotate around the two parties. That shouldn't be allowed.

So I suppose the ideal situations are environmentalism, healthcare vs. insurance, unions vs. everyone, where fixing nothing drives up the political contributions. And if you're not a politician, start a PAC or non-profit.

Just think what China could buy.

So basically they are organized crime. Except the mob actually had some ethics.

Easy concise and simple to explain to the normies.

Long before I knew anything about politics, back when I was a young 20 something and only cared about where the next (drinking) party was, I knew that Democrats and Republicans were the same team. “It’s the difference between Pepsi and Coke,” or “They’re two cheeks on the same ass,” I would say. And a lot of older folks would reprimand me for having such uninformed beliefs.

We need Power to shift back to the People.

This is the best argument for a smaller Federal Government we have Folks!

It is the job of the Feds to keep States from disrespecting the Rights of Citizens.

We should be living under Laws we make LOCALLY.

The president is the face that gets put on it all, but I'm not sure of who the last president was who was really in charge. Biden isn't. Trump wasn't. I think it's been a very long time since anybody outside the Pentagon or IC told either of those entities what to do. The elected "leaders" appear to more or less bow down before them.

They're part of it, but like the rest of it, they only control the parts they control. Nobody has the money or pull to control the whole thing.

You can throw anybody in there who wants open borders for cheap labor or illegal votes. That can go from Wall Street down to local farms.

this makes a ton of sense. I'd love to see a list of congressman and senators who operated outside the Uniparty and were primaried by their own party. it might make a blueprint of people to bring into maga

Also, a DC centric focus, fostered by the Globalist Media Machine, intentionally distorts reality ie states are powerful and so are we. The illusion is designed to trigger despair paralysis.

Consider the "all wise and all powerful Wizard of Oz" illusion that Toto Trump continues to expose. When we see reality, we are freed to finally deal with our wicked witch problems. No fake DC wizards needed. The Great Awakening is real. Wicked witches are melting. As /pol/ says, its happening.

Sundance provided a useful pre Trump frame that allowed users to see more clearly. Imagining there's still only a Uni Party does the opposite. It prevents users from seeing clearly. Thank God for upgrades.

I will agree with much of what you say. MAGA Rs are what we should hope to promote and elect and that is happening in many places. But I also think Trump exposing a lot of this also showed just how deep the corruption is. It's much deeper than I imagined before......and I was VERY cynical.