TheDonald
Communities Topics Log In Sign Up
Sign In
Hot
All Posts
Settings
Win uses cookies, which are essential for the site to function. We don't want your data, nor do we share it with anyone. I accept.
DEFAULT COMMUNITIES • All General AskWin Funny Technology Animals Sports Gaming DIY Health Positive Privacy
2887

MASSIE RETWEET: ROB SCHNEIDER: Not since the days of the former Soviet Union and their propaganda machines Pravda & TASS has ‘news’ outlets like MSNBC (among most others) been such blatant Pro Government Mouthpieces Fauci will be (rightly) tossed in the dustbin of history for the fraud he has alway (media.patriots.win)
posted 53 days ago by Sunnybats2 53 days ago by Sunnybats2 +2887 / -0 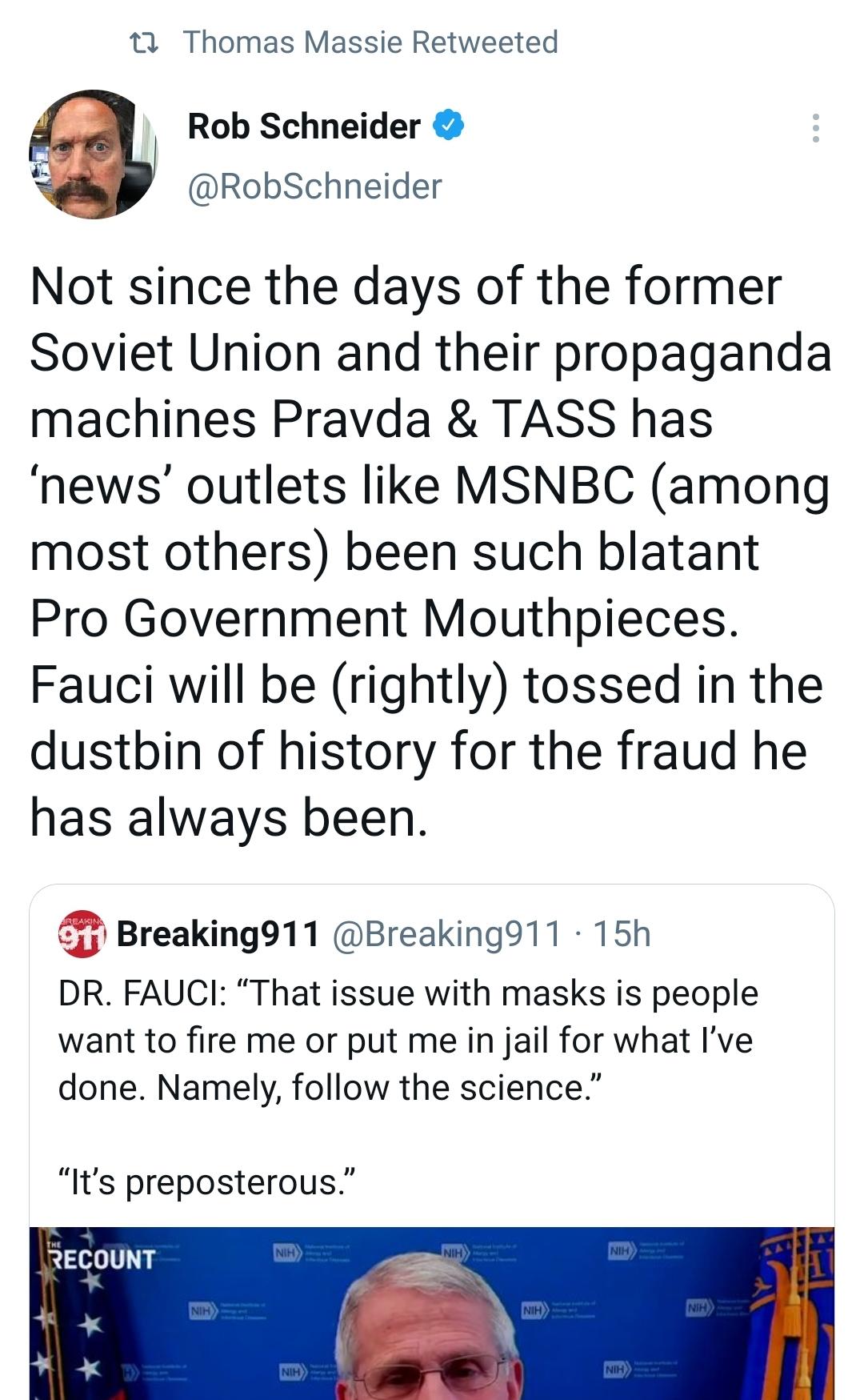 Says the asshole who ignored the science and stated as much in his own personal communications.

He's following the science that says there are 57 genders.

All those people died alone because of this fuck

fire me or put me in jail

No that's not nearly enough. I want his head on a pike.

This motherfucker made it so my dad died alone in a hospital from issues in no way related to covid while I was outside fighting to get in to say good bye. Fuck a pike, give me 60 seconds with him in a locked room. Bring a mop.

My uncle became very sick during the Plandemic and spent months at a hospital bed alone. Absolutely no one was allowed to see him.

After months of being alone and miserable in the hospital, he permanently lost consciousness. It was only when he was a vegetable that the hospital allowed for ONE person from his family to see him before they pulled the plug. His children made a huge scene at the hospital and they caved and let the immediate family in.

After the hanging/drawing and quartering. Fauci owes me and my friends/family.

I lost 3 of my best friends and my Grandma-in-law to non-WuFlu natural causes. None of them were allowed proper visitors in the hospital, nor were they allowed a proper funeral. None of them had the Chinese Virus, nor the people who should have been allowed to take care of them- but we were all treated like lepers.

There is no financial compensation that would help that situation at all. An apology from Fauci and the other evil opportunists might help, but we won't be getting that. It would be nice to see Fauci get some sort of punishment or at least comeuppance, he did collude with the DNC/RINO alliance to throw a presidential election after all.

What I'd really like to see is security-cam video of him getting corn-holed with a mop-handle before he gets hanged/drawn & quartered. Most importantly, I would like to hear the Fauci is allowed no visitors on Death Row (except for the guy with the mop-handle.)

Omg it’s the being treated like lepers thing that fucking kills me. I went to the DMV to register my boat and took my mask down to breathe for a split second because I have fucking asthma and it’s hard enough to breathe as it is. They nearly called the police on me, oh and stamped my title with “unable to register” and now it’s impossible for me to fucking register my boat because some power hungry land whale got mad at me for breathing.

This! I've had two major surgeries recently, I need all the air I can get. Meanwhile, every smugtarded control-freak SJW I know is screeching WuFlu propaganda and businesses demand the face-diaper even with the "mask mandate" no longer in effect.

I only do business with local stores that will allow me to breathe. Otherwise, I have Walmart do my grocery shopping and deliver it to my car. The list of useful businesses etc will shrink further as the "vaccine" hysteria snowflakeballs, because I am not getting an inadequately-tested politically-motivated "vaccine" just so I can show low-IQ store-clerks my "passport."

I was thinking helicopter ride but I like your idea a lot better.

Just wondering what science he followed? He told Silvia in the email that the virus particles are too small to be stopped by masks. What changed? The particles grew? Or Masks got better? Neither happened.

He meant Science, not science.

Replace "science" with "money". Pushing AZT for profit should get him 100 years in prison, alone.

When Mr. Science, Father Fauci, says "I don't have a clue" I believe him.

If you told me ten years ago that today I would have developed a deep respect for both Donald Trump and Rob Schneider, I would have laughed at you

Less than 10 years ago I voted for Romney. That likely cost me salvation.

Hahahaha that's a hilarious yet extremely true way of looking at it...

Fauci better die penniless at the end of a rope - his very own ego demands nothing less !

Fauci is just another puppet.

Aim for the likes of Soros.

I care not if he is fired, I demand that he be permanently jailed and beaten regularly. Let him work as a wet nurse in the prison medical system from his wheel chair.

You’d think it would be a basic requirement that a civil servant would have to understand and respect Americans rights. Fauci should be prosecuted for violated people’s rights. The courts are ruling against his perspective that public safety can be used to violate people’s rights. Fauci knows what he did was immoral and unlawful. The power was blinding.

When most people fail at their job repeatedly they get fired. But when you're a swamp creature you just throw your arms up and go "come on man!"

I don't want him put in jail

I want him publicly executed for his crimes against humanity.

BRING BACK STONINGS!!! I feel each and every American deserves to throw at least one stone at him. Hell I bet Jesus would have too

Science is literally becoming a religion. The religion of the "intellectual"

Intellectual here, I follow God first. Science was only ever meant to help explain Gods creations to us. The idea it can be used to effectively defeat nature has been proven to be a pipe dream every single fucking time. Attempting to play God only makes things worse every time and the fact no one has figured this out yet blows my mind.

There is no "science" behind wearing masks. They said wear the mask because it may help. Then they went out and tried to manufacture the science. The problem is that other scientific studies have been done showing no benefit from masks. Florida and North Dakota are the perfect control groups to prove masks are useless.

It doesn't matter in the end. The government religion is safety and they make up bullshit science to appease the pagan safety gods.

Faucci is not enough to appease us. We want you all.

Schneider is a funny af stand up comedian, go see him live if you get a chance!

Rob Schneider has consistently been pushing based messaging out for years now.

I've read 3 reports, 2 from before Covid, and one after, on the efficacy of masks in mitigating virus transmissions, using surgical, cloth and N95 masks, and ALL 3 came to the same conclusion, masks don't stop viruses. Period. What science is he referencing? Has anyone ever asked him for the study?

I'm currently watching Duece Bigelow: European Gigalo. It's dumb as hell, but free of SJW garbage. I love it.

Watched THE HOT CHICK the other night haah

Get a rope, no jail for this murderer

Not fire, execute you for treason.

I am just thinking, once that Levi breaks, and they start gunning for Liberals. For fuckin' with the 90%+ Trump Conservative Movement in America.

There are gonna be BODIES in the streets, hanging. My bet. Cuumo? Murphy? Pelosi? Gretcher? People who have the blood of MANY Americans on their hands?

Makes you wonder, what will happen when the Trump Movement meets the BLM Movement? When the blood is already spilling, how will Trump Supporters handle being accused of racism, race theory, or whatever?

Just saying, I wouldn't be the least bit surprised, Americans with guns, are sick of people and their shit~ Eye for an eye, said the Lord. It's very easy to follow - are you up in someone's business, looking for problems? Well, don't be surprised when the problem finds you~

Put cadavers everywhere, and let what's left of the Mockingbird media look on in horror, documenting it all. Then, try THEM for treason, sedition, conspiracy, and crimes against humanity.

If it was concluded that the virus spreads from Aerosols and not big Droplets, what science is he talking about?

I don't want him in jail. I want him tried and punished for the treasonous acts he committed. That's not a jail punishment...

Little sob should hang from the gallows or roast in old sparky. He’s a murderer.

Oh fauci, I don't want you in jail. I want you flayed, beheaded, and displayed in Washington as a warning to other burocrats

No, I want Fauci hanged on the Washington Mall. Prison or GITMO would just be coddling him.

I'd love to follow the science and science up a way to end fauci as slowly and painfully as possible. He is a fucking traitor to this country.

Im advocating always for peace, peace is the prize, but when 400+ million guns let the election be stolen, let lgbt crap explode into society and everything else they are doing, where is there incentive to stop?

O'Bummer reintroduced use of propaganda in the US. https://commonsenseevaluation.com/2016/11/21/propaganda-on-the-us-public/

Who remembers when all these "fellow patriots" started complaining how the Chinese communist party owns the media?

Faux-ci reminds of that guy from twilight zone yelling "I'm the god, I'm the god!"

Fauci has trained in double speak and propaganda.

Fauxii doesn't deserve the dustbin. He deserves the firing squad

Fauci has lied throughout the “pandemic”. You want to know what is “preposterous”? This guy writing a book and making money off his five minutes of fame. Now that’s preposterous!

"Follow the science" the most meaningless string of words, well other than to telegraph to you that you are about to get hit with a load of bullshit. It's almost like saying "no joke" or "no lie"

I'm starting to think Rob has become the unofficial PR person for the smattering of conservatives still left in Hollywood.
"What do you think?"
"I think you'll never work again if you send that out. Send it to Rob over Signal and have him tweet it."

Put him in jail? He should be executed for crimes against humanity.

If it was just incompetence then maybe just prison but the fact it wasn't actually incompetence but purposeful unethical action you get the firing squad. People have to burn for this and it better not just be Fauci. This isn't about catharsis.

"Just get the Fauci-ouchi bigots!"