TheDonald
Communities Topics Log In Sign Up
Sign In
Hot
All Posts
Settings
Win uses cookies, which are essential for the site to function. We don't want your data, nor do we share it with anyone. I accept.
DEFAULT COMMUNITIES • All General AskWin Funny Technology Animals Sports Gaming DIY Health Positive Privacy
1760 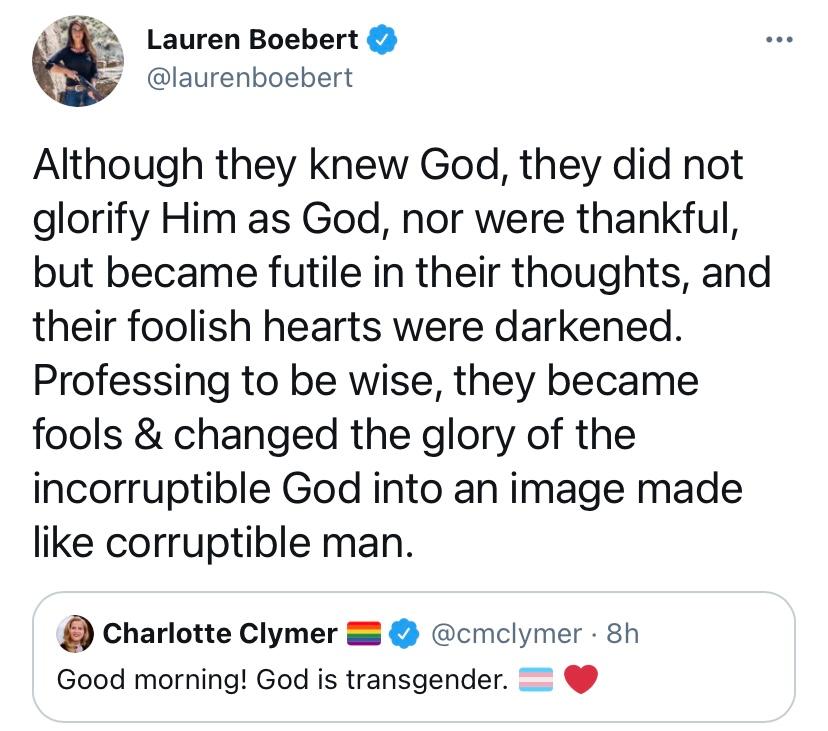 God has no gender. God simply is. We relate masculinity to power in the human mind, and are nearly incapable of defining God as He is without putting Him in a box. He created man in His image. Does God have a penis? Why would He need one? Our only use for a penis is for the evacuation of unusable materials back into the earth to be recycled, and for reproduction (which includes the pleasure of being pleased by your mate, pleasing your mate, and bearing children as they are a gift from God for His reasons). Does God have sex? I doubt it, what would he need that for? Masculinity is human understanding of power and responsibility, so we refer to Him as He.

Well fren, what God are you talking about exactly? If you are talking about the God of the bible, the Father of Jesus, Jehovah. Then you're mistaken. The bible clearly states over and over again that God the FATHER,the FATHER of Jesus, is masculine. If you're NOT talking about the God of the bible, then Ms Boebert's quote applies to what you are saying as well. You've made up some image of god in your own head that appeals to you as an individual, and you are telling us that THAT god, that you prefer, is THE God. They are not the same. So which god are you talking about?

Holy cow dude. You didnt understand anything about what I said. You're putting my statement in a conceptualized box of your own preference, are you not? I stated that God, the father of Christ Jesus, is. As He states: "I Am that I Am." And you wanna put that into a box with defined characteristics. Have you seen God? No you have not, as your very physical existence would have been destroyed for having been corrupt human flesh in the presence of the pure and righteous. My question for you, which I already posited: does God have a penis? And if so, why?

To answer your question. Yes. God took the form of a man, Jesus Christ. Jesus is God. Jesus was fully human when He walked the earth as a man. This means, yes, he had a penis.

God the Father. How can Christ not know when He is to return if He and the Father are one entity. Christ, yes God the Son of man is fully human and fully God. But He is God the Son. God the Father is whom I am speaking of. And if you believed He, the son, is still alive, he would have a penis, not "had".

I never stated that I was defending the image in the op. I myself am Christian, and am simply stating that God simply IS. As He stated "I Am that I Am." He has no defined sex. And the vile arguement that God is a man or that God has sexual, or rather just bodily organs that even hold the basic purpose of evacuating the internal organs necessary for living, is ridiculous in all its forms as He has no need for these types of organs, and is putting His existence in form into a box of human understanding. Yes we are made in His image. Now I have fellow "christians" acting the statement I have made as if I am insinuating that I believe the statement in the op image. If one linguistically refers to an automobile that one enjoys as a "she" does that make the car a woman?? No. It refers to the idea of attractive lines and attributes seen by the viewer of the vehicle. If one refers to a country as the "fatherland" does that make the country a man? Wow. You people are dense.

As to your question if God has sex. The scriptures indicate the answer is no, but then when we are given our new, pure bodies in the kingdom on the new earth, we won't be doing any of that either. According to scriptures, sex is not a function of gender but a function of mortality. When the Son of Man returns, mortality will no longer be a factor so sex becomes no longer a factor. It will be replaced with something better. You need to get out of a mortal frame of reference with God. I mean, the Trinity alone should tell you that you are dealing with a whole new set of variables beyond your comprehension.

Which verse does God the Father describe Himself as male?

Russians refer to Russias their fatherland. So russia is a man, right?

Genesis. God created Adam realized he needed a helper and created women from man. There was no woman or female before Adam. Adam was created in God's image, therefore God is male.

Russians refer to russia as the father land. So russia is a man, right?

No, he was quoting the Bible, which I will take as an authority over any man. Yahweh self describes Himself as male. He is more than that to he sure, but masculine.

Guys like to refer to their sports cars as "she" ( buddy, "she" can do 100mph without even stretching her legs!!). So the car is a woman right?

A car is a thing, I'm fairly certain that if you equated God to a car it would probably and rightfully offend someone who believes in God.

Is man not a thing? What you mean to say is a car is an inanimate object. A thing is simply describing that something exists, not its capacity for motion or thought.

You're just here trying to be a contrarian douchenozzle, give it up dude. No one here is going to agree with you because your points are very dull.

Also, on the other side: does He have a vagina?

So why would God provide us with glorified and perfected bodies after His return and His resurrection of the dead into the thousand year reign of Christ on earth if we are to be burdened no more?

I'm saying it is not the bodily burden we are saddled with. It is the nature of sin we have been saddled with. I do not see my body, and beat up and sore as it may be, as a burden. The gift of life has been an amazing experience, and while I have weak moments of struggle and frustration, I enjoy it as a whole.

Thank you. Someone gets it.

Roman's chapter 1 is awesome. It's cool she is bringing this doctrine up. This is verse 23, the rest of the chapter really nails why homosexuals are reprobates, and are going to go to hell. KJV is the sword that Hebrews 4:12 speaks of “For the word of God is quick, and powerful, and sharper than any twoedged sword, piercing even to the dividing asunder of soul and spirit, and of the joints and marrow, and is a discerner of the thoughts and intents of the heart.”, All those other english versions are merely butterknives imo

Ok. You enjoy your copywritten butterknife with up to 16 missing verses.

They have been given over to a reprobate mind

How many of you have seen "Charlotte" Clymer? The guy is a nut! And don't the leftists hate God, anyway?

LOL! That "Charlotte Clymer" guy must be the transvestite in the meme comparing him to a real girl (it's a picture of him obviously lecturing a young lady about some imaginary "micro-aggression.")

> This one, what a trainwreck!

I wish I could bitch slap people like this! Boebert is a winner and a great American.

Some people are begging for God's wrath.

Those Twitter folk just say the dumbest stuff to try and get reactions and likes from other morons.

Did Charlotte ask god how he identified?

Charles clymer is a fucking psycho

So is Big Mike.

Did you mean transubstantiation?

People seem to forget that the Abrahamic theology is fucking metal and isn't your sissy transgender shit.

A tranny god doesn't make angels who are wheels made of eyes.

‘You shall not hate your brother in your heart. You shall surely rebuke your neighbor, and not bear sin because of him.

Adam and Evie's failure wiped away what was given. We now live in a would full of sin, directly caused by Adam and Eve. This world is not supposed to be Heaven, it never will be. Sin is far too deep entrenched in every person and that's why God's grace and Jesus's sacrifice is so important to us.

If by transgender she means “not real” then yeah as an atheist I can get behind that.

AIDS is proof that God hates faggotry and degenerates.

I think that one was Fauci as well.

God created Jews to test us

The Lord God is transgender, but that is not God, the Creator, the Father of Jesus.

They use the pronouns GOD/GOD.