TheDonald
Communities Topics Log In Sign Up
Sign In
Hot
All Posts
Settings
Win uses cookies, which are essential for the site to function. We don't want your data, nor do we share it with anyone. I accept.
DEFAULT COMMUNITIES • All General AskWin Funny Technology Animals Sports Gaming DIY Health Positive Privacy
1482 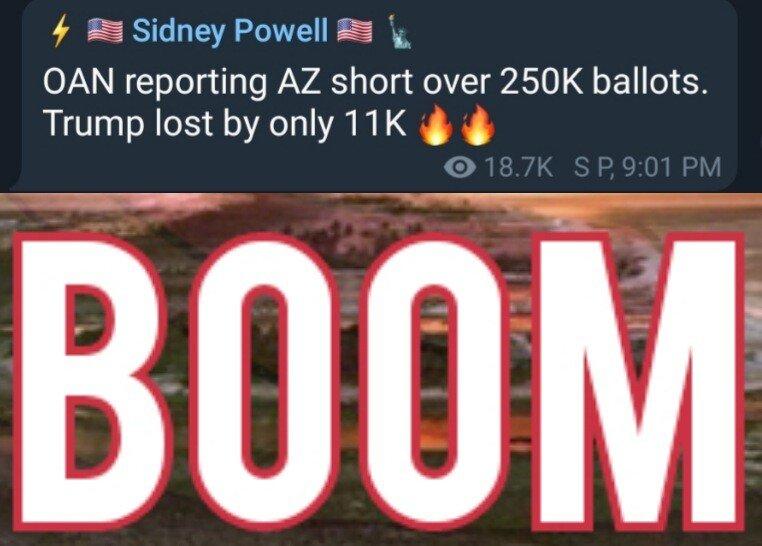 Has anyone heard this directly from OAN or another source? Just want to be sure it's accurate.

i wouldnt get ahead of anything . wait until after the canvas and its officially announced directly by the Arizona state senate

Yeah, I'm doubting the veracity of this information. I'd still give it slightly more credibility if it came from OAN themselves, since they have more presence at the audit than any other news organization.

Best to wait until after completion, but you know numbers will be leaked now that the recounting part is basically complete. The question is which numbers you hear are correct.

i imagine the Arizona senate and the audit f8rmnwillnhave a press conference or a press release and if they are short 250k ballots i would imagine they would pull the election board in in front of the senate and try to find out where the ballots are.

And I guarantee you all of those things will happen but they're not going to happen early....

I don't care how outrageous the results are, they're still not going to happen until it is complete.

Probably in that burn pile they found.

If... its getting to be a long wait. The longer it takes the more bulshit have a chance to happen

Would you rather them do it fast or accurately?

I'm pretty sure the goal from the beginning was to make this thing bulletproof and that takes time.

Would you rather them do it fast or accurately?

Why not both? At least start throwing out numbers so people see the corruption.

And unfortunately it will never be bulletproof because the left have been convinced it a unilateral sham... unlike the meuller bs, in their alternate reality anyways

OP needs the sauce or I no can berweeve

Sidney was right, just way over her head.

I actually don't have a problem with Powell. She's just the only one reporting it that I can see. Haven't seen it on OAN myself, either.

I think the corruption was so blatant she got cocky. Not understanding how going against the FBI DOJ CIA who all stole the election would not go anywhere. Its like us seeing the under the desk ballots in plain sight and not understanding why nothing was done. She thought "well just play the tape" Then all outlets deny anything to see.. So she is taken back. Kraken was a Kraken But Godzilla is not a monster if no one looks, like in that Simpsons Halloween special. "Just don't look! Just don't look!"

Sidney Powell wasn't right about anything. She's a controlled op hag. Like a living Q who might have a vagina, idk.

You don't necessarily know that. As it stands right now, it's just a screenshot of words.

It's on her Telegram. https://t.me/s/SidneyPowell

I'm assuming it's her account because of the large subscriber count.

Thats the good stuff. Love me some sauce.

I'd take anything from Powell with a boulder of salt.

TITS or GTFO, I can't find a link

Yeah shut the hell up dude

trump lost the count by 11k

it was a fake count

don’t be a dweeb

it was fake but it happpened

dude you are spam posting powell-hate

Hey, that's great, I didn't mention anything about whatever the fuck you're talking about. That being said, are you finished now?

Ballots not matching numbers on the each of the boxes is old news.

no, but mike pence is a treasonous scumbag

Sidney only said that OAN is reporting this.

'mikepence123' is a giveaway bot name. Take your shit somewhere else.

That is a really good point. Are there specific counties where Kelly over performed Trump?

It is inconceivable to me that AZ went for Kelly OR Biden.

People there are sympathetic to kelly there due to giffords

A bunch of bullshit been posted by retards. Unless you hear directly from the Audit team everything else is complete horse shit.

Sydney Powell is a fucking grifter.

And we should take your disrespectful insults about Sidney seriously because...

A wild retard has appeared…

Yea thanks but some of us watched all her bullshit claims in real time and now see that NOTHING she talked about, claimed she had, or would happen has been true or released. It’s all been bullshit.

GRIFTER. Did more harm than most people attempting to harm us by pushing a true believer narrative instead of action.

Where is everyone getting their information from? Where are you seeing 20-30k?

Where is everyone getting their information from?

I think most of Reddit gets their information on the Audit entirely from Bannon's War Room. Don't get me wrong, I like the War Room and watch it daily, but they aren't directly involved in the audit and don't have an inside track nor have they been on site. The closest they've been are interviews with Mark Finchem and Sonny Borrelli. Check the Telegram channels for Arizona Informers, Arizona Conservatives Take Action, Sen Kelly Townsend, Rep Mark Finchem, & Rep Jake Hoffman.

'Arizona Conservatives Take Action' noted on 13 June that the audit count had passed 2M with 5 boxes remaining. Each box can contain up to 1200 ballots(About 6000 ballots if each box is full). The exact figure of cast ballots from Maricopa County was 2,089,563 ballots. They're still short, obviously, and this doesn't account for the shredded ballots from the dumpster or chain of custody issues from the County.

Nor does this include the Canvas part, which is currently on 'indefinite' hold.

So you're saying the 200,000 number is wrong because they already admitted to counting to 2M?

So you're saying the 200,000 number is wrong because they already admitted to counting to 2M?

IF they have in fact counted past the 2M mark and only had 5 boxes to go at the time of that post, then yes, 200K+ ballots missing would be impossible. Doesn't mean they aren't short ballots nor does it mean votes weren't flipped on machines. When I was doing PE on site on early ballots, we'd see dozens of Biden ballots in a row from early voting. If I had to make an educated guess, I'd say the early voting ballot boxes were around 75%-85% Biden ballots. In Arizona, I'd find that extremely, extremely suspicious.

you’re the one with no clue talking out of your ass. 200k+ is the number missing that has been put out, not just by oann

You guys falling for this boom shit after almost 4 years since Q started it are embarrassing.

you’re the one with no clue talking out of your ass. 200k+ is the number missing that has been put out, not just by oann

The 200K number originated with the Bannon War Room by Boris Epsteyn based on early tallies showing boxes with 10-17% discrepancies. They extrapolated from there and compared it to the Navarro report.

There are several Arizona telegram channels, most resharing each other, that have posted accurate stats throughout the process, to include the audit's official Telegram channel. They are not 200-250K ballots short.

Sidney's update for the week. Don't take the OANN post to the bank until it's confirmed.

Here is your “Good News of the Week.” We are WINNING on many fronts. There will be MANY more wins, so take courage!

Here's the link to her Telegram page: https://t.me/s/SidneyPowell

Trump didn't lose. This is some bullshit. Is this fake validation of pedo Joe? I am not buying that babbling idiot Biden won by any amount. The commies disappeared a bunch of ballots.

you’re not getting this are you? missing ballots mean ballots were run through the machine multiple times. that’s voter fraud. get it now?

Its either this, the shredded ballots are what is missing and were removed due to being obvious fakes, or the voting machines added ballots that didn't exist. Either way, Trump won by a lot. They needed 240k ballots just to hit even and then added the 10k for the win.

We know what missing ballots mean. But the OP is just repeating shit he heard other people pulled put of their ass.

That was the original certification. If the missing ballots were recorded for Biden it means that Trump won. By a lot.

1/4 mil seems like a frequently used number in regards to missing ballots in Maricopa County.

Well if Sydney Powell says it, it has to be true. Must be her KrAkEn found by the hard work of others.

Sidney didn't say it was true, she said OAN was reporting it. Pay attention.

Fucking high road faggots who think we're not are why we lose.

High road and optics cucking are why the "conservatives" of 2021 are exactly like the "liberals" of ten years ago. Rinse and repeat every ten years until collapse of society.

Decertify and then sue and take it to the Supreme Court.

Decertify and fucking hang everyone involved in the fraud.

Courts are not interested in freedoms or legitimate elections. They only care about legislation from the bench and preventing the rise of a true Right in the USA. They want business as usual, even if the usual is infringing every fucking right listed in the constitution.

This interview with Bennett gives insight into the missing ballots.

I talked with one of the observers this week and one box, for example, showed official talley of 100 and only had 15 ballots.

The info can be twisted as the missing 250k ballots would have proved Trump lost more.

Some grammar would be nice. That can easily be read as if Trump lost by 11k after the revelation of 250k missing ballots.

We all know better, but the retards on the left won't be able to sort it out.

So many infiltrators/bots on this post trying to discredit Sidney... who has a full career of solid, honest, patriotic work to back her up.

What do the idiotic insult hurlers here have to back their words up? Fuck all.

However, if OAN is posting fake news, their credibility is at stake also.