TheDonald
Communities Topics Log In Sign Up
Sign In
Hot
All Posts
Settings
Win uses cookies, which are essential for the site to function. We don't want your data, nor do we share it with anyone. I accept.
DEFAULT COMMUNITIES • All General AskWin Funny Technology Animals Sports Gaming DIY Health Positive Privacy
112 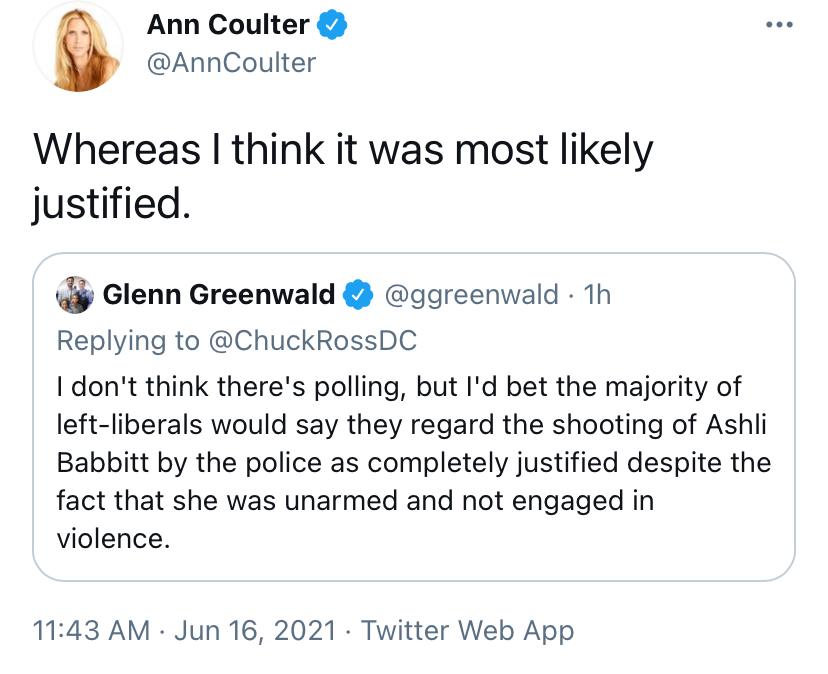 Fine, I won't protest when they come for her.

Honestly, I'm convinced she just feeds off hate from both sides and says 60% of what she does just for the reaction. The other 40% is what she actually believes.

Ann is Milo with a wig and makeup. Change my mind.

Why does no one talk about the fact that the cop shot her with other police officers (swat team) literally right behind her?

That alone should get him fired, at minimum.

Some one suggested I read one of her books about 20 years ago. So I read it. And I thought it was total garbage. For every single example she came up with, I could think of several counterexamples that would disprove the point she was trying to make. It was basically a hard copy of Fox News talking points so that cuckservatives could stay in the controlled opposition echo chamber when they were away from their TV.

I get whiplash from watching her change positions

I have a love/hate relationship with her.

She is on target one day, and off-target the next.

That just proves she isn't very bright, nobody would argue this as a justified use of deadly force, because it's not, and it's why they haven't.

Can confirm. Told my multiple people "she was trying to go somewhere she wasn't allowed"

Whether it is or isn't justified, that officer was a terrorist trying to cause a bloodbath and should be trailed for treason on the grounds of the capitol.

That shot was this fucking close to causing dozens to get badly injured or even cause a massacre. He could have easily overpowered her. He had 3 guns covering him and his target in a position of weakness where she could be dragged to the floor and put out of commision easily by getting her mid-vault.

Instead that dipshit/monster shot her center mass, and I don't want to contemplate how fucked the situation could have gotten if she died on the spot instead of on the way to the hospital. Generally that would be considered a "powder keg" moment, and the crowd behind her would have had one out of 2 reaction: Violent dispersal, resulting in a dangerous backward rush that would see police and protestors alike trampled, or vengeful bloodlust, which would have resulted in the 2 rifle armed officers on the other side of the barricade getting quite literally torn to shreds by the impromptu lynch mob, and the more aggressive of the crowd now retaliating with their two newly acquired rifles vs the concealable pistols of the officers. Dozens would have died in the crossfire and it might have even resulted in an actual insurrection forming.

I wouldn't piss on her if she was on fire.