TheDonald
Communities Topics Log In Sign Up
Sign In
Hot
All Posts
Settings
Win uses cookies, which are essential for the site to function. We don't want your data, nor do we share it with anyone. I accept.
DEFAULT COMMUNITIES • All General AskWin Funny Technology Animals Sports Gaming DIY Health Positive Privacy
2103 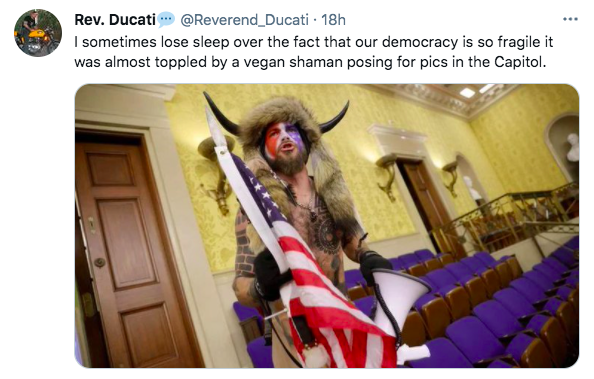 how many vegan Trump supporters do you know? This guy is Pantifa -- most likely FBI-hired Pantifa seeing how he was so easily able to just walk around the Capitol and into the chambers to pose for pictures at Piss Pants Pelosis' podium

Remember a "violent right wing Insurection" was done entirely without guns on the protesters side. One way or another a narrative is not aligned with reality.

their reality is in a completely different dimension

His lawyer coming out and basically calling him(and a lot of the other protesters on the 6th) feeble minded and crazy was pretty shocking.

Well the Covid Vaccine deaths makes it worse than 9/11

What about the stolen election?

There is zero chance that Biden is a real president, I personally believe Trump or some other Patriot group is running him. Call it hopium if you like, but the signs are all there.

and that this guy made all our CONGRESS PEOPLE hide under their desks like schoolchildren instead of simply walking out their doors and asking everyone to protest peacefully outside the Capitol, please

Ironically, he does make a salient point reference this image.. Segueing into this image.

I want to take a hammer to any moron that tries to make it top 9/11 or D-Day. The dumbest shit imaginable, and I hear Biden speak.

Both were planned by alphabet bois

I love the video of this. security guy is like 'hey coudl you guys not mess too much stuff up' and the 3 dudes walking around the chamber or resting are like 'oh totally dude we dont want to mess this stuff up' 'ok seeya' 'alright later'

That my whole thing about this. BLM 100% confirmed and unexaggerated set up a road block and murdered a little girl in cold blood 100% because she was white in Atl and the media and libs gave it at best lip service.

Even if people stormed the capital in protest, so fucking what. It is not near as bad as literal dozens of BLM protest where innocents were shots, cops were attacked, and gov building were burn to the fucking ground. Again, those were defended.

I never want to hear a lesfist say " eat the rich" ever again. Does anyone else remember when mock guillotines were assembled during leftist protests. But when right wingers protest, and yes even storm the capitol unarmed, all of a sudden they are trators and insurrectionist? All the talk about revolution and then the closest thing we get and they immediately drop to their knees and suck gov and corporate dick and swallow every last drop.

Pretty sure he was an FBI agent. People peacefully demonstrating did nothing wrong but they were set -up by FBI agitators.

Yeah, well, the bible (Matthew 23:8-10) says that you shall not call yourself reverend, for we are all brothers, and we are all teachers. That didn’t bother this guy from doing whatever he pleases in the simple pursuit of respect by his peers. Truth doesn’t matter to Ducati.

Ive learned Socialists love to use the term democracy.

I heard he was a fucking Kennedy infiltrating the FBI. I may have...I may have gone too deep.

He's an environmental activist. The El Paso shooter was one too. There have been a handful of likely cases of environmental terrorism pinned on Trump. They're piggy in the middle though because they're also xenophobic fuelled by the imbalance of overpopulation.