TheDonald
Communities Topics Log In Sign Up
Sign In
Hot
All Posts
Settings
Win uses cookies, which are essential for the site to function. We don't want your data, nor do we share it with anyone. I accept.
DEFAULT COMMUNITIES • All General AskWin Funny Technology Animals Sports Gaming DIY Health Positive Privacy
3567 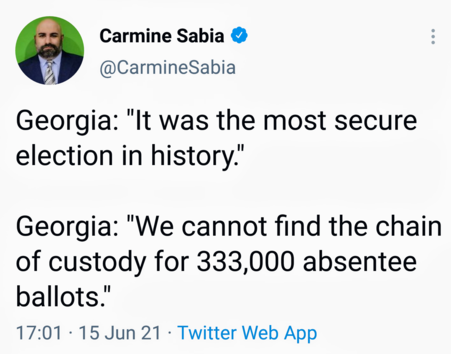 Also GA: the suitcases full of ballots pulled out after everybody was forced to leave, but was caught on hidden security cam, totally normal...

Hey man, there was a water Leak give them a break.

It was just pee

It was just pee

Guys don't miss the urinals at Legion posts and VFWs because all the urinals have little ceramic Hanoi Jane targets in 'em.

Wow. I had no idea they were a standard feature in VFW halls- I just assumed they were in ours . Nice.

never heard of hanoi jane. she let em all bang her or what?

I still think those dumb asses we’re trying to flush Trumps votes and caused the toilets to over flow! Makes sense!

The deboonkers are mentally ill cultists. Their reality is based on emotions. They can't see fraud no matter how blatant. There is no winning the argument with facts.

I disagree. If you give them a fact, they'll just ignore it, yes. They'll reject all of your facts and ideas. If you make them find the fact themselves, or have an idea, they'll see it as theirs and defend it. The questions you ask have to be carefully chosen and you absolutely can not give them an easy out by saying 'suitcase' or some other similar thing.

A good example, is to ask them what they would accept as proof. It can make them realise they dont know, which undermines their knee-jerk certainty of the proof's absence. It can force their agreement, when they define a proof and you supply it. It puts them in charge of the rules, and exposes their inadequacy when they are uncertain. The fact is that they have no idea what they want, but telling them that will have no effect. They must realise for themselves.

Another good question is, "how do you know?". 'Immigration is nothing but a benefit', they say, but how do they know? "OK, but the good outweighs the bad", they might concede. How do they know? Eventually they will realise they havent read original sources, just the newspaper they trust. How do they know it's honest? Dont tell them theyre wrong, let them conclude theyre uncertain. That seed will grow if you give it time.

Theyll respond badly if you embarrass them with this technique, although, it sure is fun to destroy them in public with it. The point is to let them explain. Give them the rope. Give them a lightbulb moment, not a beating.

Ok so sometimes give them a beating, but you see my point I hope. You use the same facts, but make them work for them so they value them.

Yeah, they WERE the same cases they used to transport other ballots. They were the correct cases.

It makes us look dumb when we call them suitcases.

That's not the issue. The issue is that they told everyone to leave and then they started counting after everyone was gone, running through the same stack of ballots many times.

It makes them look guilty when they correct you and say “they are pelican cases, not suitcases”. Ok… whatever. It makes them acknowledge that 1. It happened and 2. They are aware of it and trying to rationalize it. Don’t let them do it.

No it doesn't. It makes you look dumb. They're not suitcases. They're the exact same bins they used everywhere.

Don't give them something like that to latch onto.

Focus on the signal, not the noise.

And focusing on “bin” vs. “suitcase” isn’t focusing on the noise? It is and it’s asinine.

Yes exactly. Don't use the word suitcase so you can avoid it in the future. That's my point. Don't give them something to latch onto.

Why are you being so defensive? It's untowards.

I'm trying to help you with a really simple improvement to your rhetoric that is very important and will have a big impact.

I'll trust Trump (and all observations during my lifetime) over you on this. Trump frequently got a meaningless detail wrong so they would implicitly confirm the meat of the story to get him wrong on a technicality. "You're right, the fraudulent votes snuck in with no chain of custody were in bins in some cases, suitcases in others. They did the same thing in multiple states."

How about you trust the video. It's really clear in the video. Don't be a sycophant.

But some guy on 60 Minutes showed the video and said pulling out bins of ballots hidden under tables the moment observers leave is totally normal election procedure!

... the sickening part is, it probably is.

Fact check: the entire sentence is a lie because those were BOXES, not suitcases.

For Georgia, it probably was. Almost all GA politicians belong to the same corrupt club.

Can't get more secure than an untraceable trail 👍

For the 2022 election, Georgia aims to have all ballot custodies be untraceably secure!

Exactly. “Secure” for who exactly?

I looked up Happy Faces Personnel Group, because is sounded so crazy. It is owned by a Lenard Hairston, who owns several companies that seem to be tied together (address matches) https://www.bizapedia.com/people/lenard-hairston.html

The Happy Baby Faces and Happy Senior Faces just seems creepy, so I looked up the main address on these holding corporations. Looks like a janky hole in the wall.

Good to see the autists back in action!

We have never needed the autists so badly.

I know this place was the best when it was full on research five plus years ago. Memes were a fun supplement to wrecking shit, not the main course.

If you want the autists back, you will have to tolerate their antisemitic findings.

And go ahead and let what I just wrote get someone reading it upset. The autist just report what they see.

Yes they see lots of 4chan shilling from Qatari operatives.

Further checking seems to indicate that Mr Hairston passed away in May and the Happy Faces outfit is now apparently owned by Edwina Berry. Possible that she was his life partner as well as business partner.

Doesn't appear to be foul play involved in his death, he was in his seventies, but the timing of his demise is interesting to say the least.

It was pretty easy to smuggle the fake ballots in between her front teeth.

Shes hiding 120lbs of crack up her skirt at all times.

Secure for the Democrats, definitely.

Georgia is the #1 ideological battlefield right now. A deep red state with strong media Influences large successful black population cannot be alowed by the left. It is the spark that can burn down everything they have worked for. They would rather destroy it that left it live.

Republicans (probably most) are they too. Uniparty 2020.

Funny how all the ballots that mysteriously show up always work in the Democrats' favor.

The number has grown.

Chain of custody is a phrase used to confuse normies. They don’t know where these ballots came from.

They nuked the governors daughters boyfriend.

Of course she was.

Fact check: TRUE. In the last election, they couldn’t find the chain of custody for 500,000 ballots. So there

Did y'all look in Ruby Freeman's shitty-ass weave?

Georgia: i mean we secure the win for dems, not the fairness of this election.

Both of these statements cannot be true at the same time.

...just think how bad the OTHER elections have been then....

How long does it take a small handful of workers to push through that many ballots over and over after everyone has left for the night?

the ballots are hidden in Stacey Abrams tooth gap

Talking about "chain of custody." You must be raciss😫

Those ballots from the suit cases were probably the absentee ballots. The mother daughter duo were running the same ballots over and over for hours. Of course they are going to add up.

So…. After what we saw in Georgia what does that say about past elections? “The most secure election in history”? Okie dokie! Now we need to audit every election ever if this is the most secure you can do……

So when does it become legitimate time to take our country back? Serious question?

Georgia's on all our minds

Wasn’t it specifically a little over 18k ballots they didn’t have chain of custody for? I think that the rest were counties failing to respond at all meaning we don’t know definitively. Under promise and over deliver.