TheDonald
Communities Topics Log In Sign Up
Sign In
Hot
All Posts
Settings
Win uses cookies, which are essential for the site to function. We don't want your data, nor do we share it with anyone. I accept.
DEFAULT COMMUNITIES • All General AskWin Funny Technology Animals Sports Gaming DIY Health Positive Privacy
2563 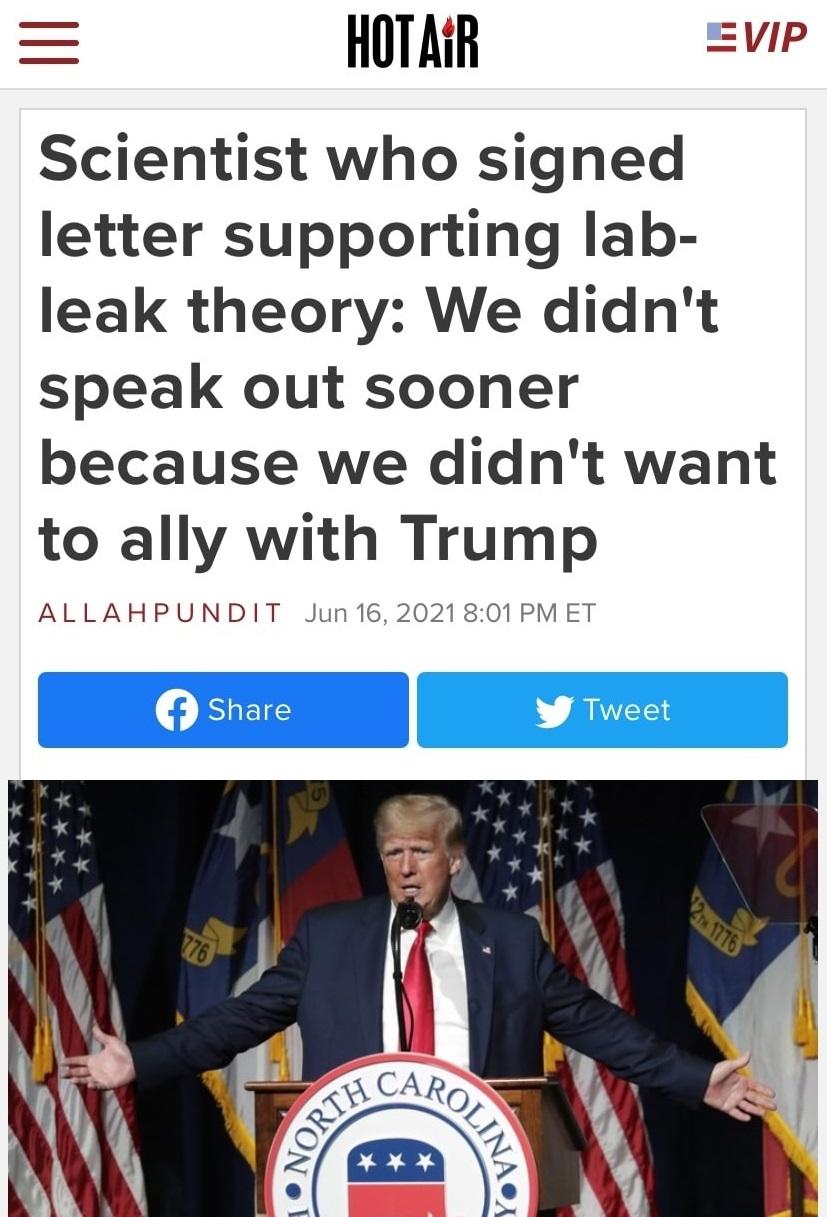 Why did you let thousand die?

Everyone who puts politics before the well-being of American citizens, our civil liberties, or our country itself are traitorous bastards who need to be hanged until dead.

This is all building to a head.

These morons don't realize that they push the majority of America closer to the edge with this bullshit.

Thats what they want...

Yep. They would love someone to commit an act of terror so they can use it to push even more authoritarian measures in the name of "safety".

It won't matter if one of us go nuts and commits terror or not. They've set the stage for false flags. If we do it, it saves the deep state a lot of effort. If we don't, they'll do it themselves and normies will believe we did it.

Since they define act of terror very loosely, I’m sure it’s just a matter of time

They're taking right from the Nazi playbook.

Could you expand on this, please? What did the Nazis do?

There's the burning of the Reichstag, which the parallel between that and January 6 seem oddly similar. You could also compare that to when Hugo Chavez took power in Venezuela.

In this instance, November 7, 1938 a 17 year old German Jew shot and killed a German official at the Embassy in Paris, because his father had recently been deported by boxcar to Poland. This pretext allowed Hitler to have the pretext to take more actions against the Jewish population. 2 days later was Kristallnacht, meaning there Night of Broken Glass. It was when Jews were killed and their businesses and places of worship burned.

It seems that our SS is trying to get the pretext to begin persecution and the justification to disarm us. They just need one loose cannon to do something.

The only possible upside

The thing is the majority of americans agree that all of this shit is utter bullshit and we voted appropriately, and they just stole the fucking thing anyway

It would be great if Trump brought this up at his next rally. Discussed it in detail with the sauce.

If "just following orders" didn't work imagine how "I felt entitled to be a petty jackass" will do?

Anyone who puts politics before the objective search for fact and truth has no business calling themselves "scientists" and should be immediately stripped of their titles.

amen, hang them all and have they're children and loved ones watch...

Strip them all of their licenses and string them up for murder. There are few things that are a more egregious violation of their hippocratic oath than this.

Automatic loss of license and tried for malpractice. Knowingly letting people die is worthy of execution.

The Hippocrates Oath is optional. A lot of physicians do not take it.

Fuck, I am asking all my doctors if they took the oath and if not they can fuck right off and I am telling all their patients.

Hippocratic Oath. Hippocrates is the found of modern medicine.

My spellcheck is a nazi, lol.

Glad these people put their orange man bad syndrome before public safety and overall welfare. Disgusting to see so many put politics before improving patient outcomes.

As someone who works within the healthcare field this whole situation has been eye opening to the amount of idiots in this field that have failed to think critically.

Want to know how to live a long life. Only go to the hospital when you have to. Besides that, stay away.

Prison.....they admitted their guilt. Arrest them whatever state they are in, send STATE boys to arrest them and put them in a STATE prison

Are countries going to eradicate the Wuhan labs now? Action must be taken to prevent this from ever happening again.

Arrest them with what? Corrupt police officers that would rather see you rot in prison?

State cops are in on it too. Local ones too.

Cops are good at one thing: Following the rules of their boss (employer)

The day a cop thinks for himself and actually does what is right is the day we don't have to be on this forum to hear the real news.

Not all cops are like that, there are plenty of based sherrifs and cops who would quit (and they did by the thousands) if asked to do somthing like that

Exactly. Then replaced with compliant officers

sure, but not all places in the nation are like that. Some places have always been and always will be conservative, including the cops.

Prison is too lenient. Torture.

We didn’t science because politics.

They UNDERSTOOD the science and STILL did "oRanGe mAn BaD"

Trust the science, though.

How to science: 1. Propose a theory. 2. Check with politicians to see if you can proceed.

Certainly the only time in this whole mess that they've done that.

If politics is more important than the truth, you're no longer a scientist.

Therefore; fuck you, you fucking fucks.

Ethics.... these people are totally to be trusted huh?

Cancel culture and bullying works. People are willing to let millions die because they don't want to be attacked by the mob.

Treason. People died for no reason. Because of democrats insane rantings. Because some people wanted power. Anyone that kept quiet so Trump wouldn’t be “right” deserves beheading.

So they're cowards and they'd rather a bioweapon attack on this nation is successful than admit that a politician they don't like could be right. If our nation falls into Civil War and the U.S. doesn't exist in fifty years from now, it will be the fault of polarized, dishonest fanatics like these fools.

How RETARDED can one be...hey look found a photo with Hitler drinking water, let's have the entire planet thirst to death. HUMAN SCUM!

Leftists are fucked in the head

I'm trying to think of an analogy that works.

Something like, think for a second: a NASA engineer in the 60s that disagreed with Kennedy.

Imagine hating a person so much that you'll do and say anything to spite them. What happens when people never develop morals or values internally.

If it's true, it's reliable.

If it's true then citation should be easy task for the OP.

Read the comments, Cletus. I avoid links so I can include a screenshot of my choosing. If anyone wants to visit the site, it is there. You've never posted so your ignorance is understood.

There's too much unfounded garbage on this site and here you are getting your panties bunched when people wants a source.

You've never posted so your ignorance is understood.

Don’t give hotair the clicks. They used to be good, then allahpundit showed his cards as a never trump faggot. He’s a real piece of shit who went out of his way to libel trump leading up to the election to hurt him. Ed morrisey didn’t have the balls to stand up to him.

Thanks, I was unfamiliar with them

People literally died because US citizens didn’t personally like the President; and the US citizens involved were okay with this outcome.

Trump lived rent free in their heads for years and he still is.

So all those bullahit signs that say, "In this house we believe... science is real*..." we failed to see the *.

*only when it doesnt ally with Trump

They should goto Prison for Treason. This was a Bio Weapon Attack. And they covered it up and withheld valuable intel on China attacking the World ?

Those scientists need prison time. They are not for the truth... they are 100% discredited as scientists.

So let me get this straight. Trump tells the truth and a whole bunch of experts cover up a lie because they thought they would look bad siding with the truth?

Doctors: wait why are you putting this rope around my neck *snap *

Politics before truth. This is the entire theme of fake news. They don’t always lie by commission, but constantly lie by omission to keep from supporting the “wrong” politics

Murderous faggots all of them.

Hang these fucks. No trial.

So, his political allegiance is greater than his allegiance to the truth.

It really is that simple. He values his cocktail party invitations and professional / social standing.

Integrity is saying what needs to be said even at personal cost.

Random person: Why did grandma need to die?

Commie doc: Cause Orange man would have gotten the credit.

If you lied, and people died. You get fried.

Then your mentally ill. While your in prison you can get medical treatment.

You could have allied with, you know, America.

They'd rather kill thousands than speak the truth Trump said.

So this just goes to prove that they let tens of thousands die, just to be anti Trump (HCQ).

Any scientist that would do this is clearly not thinking about the best interest of people, and should probably be thrown in jail or at the very least banned from ever studying anything in an official capacity again.

License to practice should be gone. They should then be tried.

So committing crimes against humanity is better than associating with someone who hurts your feelings? TO THE GALLOWS!!!!!!

But you DID ally with Trump.

Just, after he got cheated out of office. You're still Trumpies.