TheDonald
Communities Topics Log In Sign Up
Sign In
Hot
All Posts
Settings
Win uses cookies, which are essential for the site to function. We don't want your data, nor do we share it with anyone. I accept.
DEFAULT COMMUNITIES • All General AskWin Funny Technology Animals Sports Gaming DIY Health Positive Privacy
2586 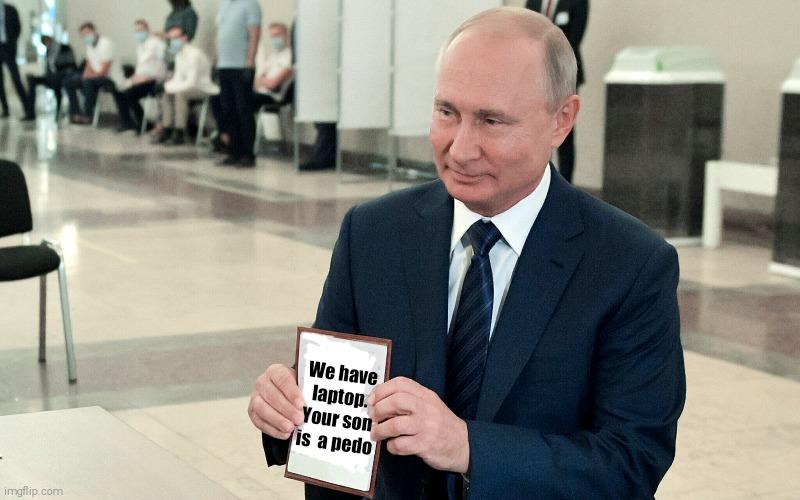 The peepee tapes probably were real... they just weren’t Trump. Knowing what we know now, it was almost certainly Hunter.

"Good day Mr Manchin, im just calling to talk to you about Hunter Bidens schlong in connection with his nieces feet"

B-b-but Trump's a racist! And Hunter is no- wait, ever mind.

That's him. That's the one. He has Joe's number. Hunter's too. How else can he buy Hunter's art? Or the Big guy's influence? Need a pipeline, call Joe.

Every time I upvote Anaconda, I feel like the span of time between now and the End of Days accelerates...

Look, fat. I bet I can do more pushups than you. Rub my hairy legs, cockroach, or you're a lying dog-faced pony soldier! Trunumulimanuprzure!

I bet he’s got Pelosi’s lap top too.

He knows who gave the order to kill Ashli Babbitt. He made that pretty clear.

I read that as “your son is a pede” and was very confused.

This… Does not bring a smile to my face.

It wouldve been funnier if it said “we have laptop, your son is pedo.” Leaving out the a bc i read it with the russian accent and broken grammar until it got accurate about Hunter being a pedo. Then it lost some steam lol. Oh and by the way…..

Russians know before others.

Yeltsin used to listen to the Bill and Monica telephone calls long before any US citizens or The Side of Beef knew what was happening.

What is the advantage of not divulging that stuff to cause domestic turmoil in your adversary’s nation? Serious question.

Yeltsin, back in the day?

An old drunk guy, maybe he and his people in the Kremlin wanted to just laugh at the exclusive show with the phone bugged?

Maybe Russia did use that?

The USA sent a huge amount of money into Russia, to "help" after the USSR split apart, and most of the money was unaccounted for.

That did start before the intern stuff.

Yeltsin had more problems in Russia, coups and alcohol, than Clinton did in the USA.

When A Russian President Was found Naked Outside The White House

From its high point in September 1993, when the United States Congress approved US$2.5 billion in aid to Russia and the NIS, the amount had declined to less than US$600 million for 1996

"Citing a classified memo, the Washington Times reported yesterday that Clinton had promised Yeltsin to back his re-election bid by formulating "positive" policies toward Russia

Yuck it up. Meanwhile no post about the Democrats taking another run at HB-1 on Tuesday has been stickied. One of the things in the bill is automatic voter registration when you get a drivers license. Many many states give drivers license to illegal aliens. They are going to legitimize all those votes that they illegally put through last time. Yes let’s keep sticking meme after meme.

Putin has got to be looking at all of this saying to himself “you have to be shitting me” I had to stay locked in room all afternoon with a moron dumber than Hillary and Kerry.

sticky quality... where are the mods

The mods delivered. They are gods.

When Russia is more America than America. They still say get a job loser, and call people f__ts.

Speak for yourself, I call people faggots on a regular basis.

Not really, the fact is America has lost its position on the moral highground, and Putin is calling it out.

I still can't believe he insulted Trump and praised Biden on live TV in front of the entire world.

I highly doubt any of that was sincere. I mean who cares but if a girl you wanna fuck just opens her legs and says “here have at it” are you gonna call her a cunt?🤣🤣🤣🤣