TheDonald
Communities Topics Log In Sign Up
Sign In
Hot
All Posts
Settings
Win uses cookies, which are essential for the site to function. We don't want your data, nor do we share it with anyone. I accept.
DEFAULT COMMUNITIES • All General AskWin Funny Technology Animals Sports Gaming DIY Health Positive Privacy
266 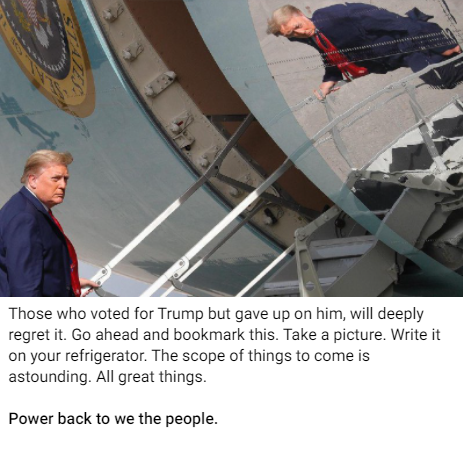 Power back to we the people

The first step in that hard road will be getting control of the DOJ/FBI.

Someone over on AT wrote:

Trust in the FBI cannot be regained until there is a reckoning. That can only come through accountability for bad actors.

It 'is a constitutional fixture in its own right.’ In fact the whole theory of its function is that it belongs to no branch of the institutional government, serving as a kind of buffer or referee between the Government and the people.

Is it any wonder 'they" spent decades, probably centuries, convincing us that this RIGHT is not really ours; or if it is, it is severely limited or just plain too scary for us ignorant peasants to have at our fingertips?

They would rather have us believe, as we do now, that we are at their mercy !