TheDonald
Communities Topics Log In Sign Up
Sign In
Hot
All Posts
Settings
Win uses cookies, which are essential for the site to function. We don't want your data, nor do we share it with anyone. I accept.
DEFAULT COMMUNITIES • All General AskWin Funny Technology Animals Sports Gaming DIY Health Positive Privacy
3826 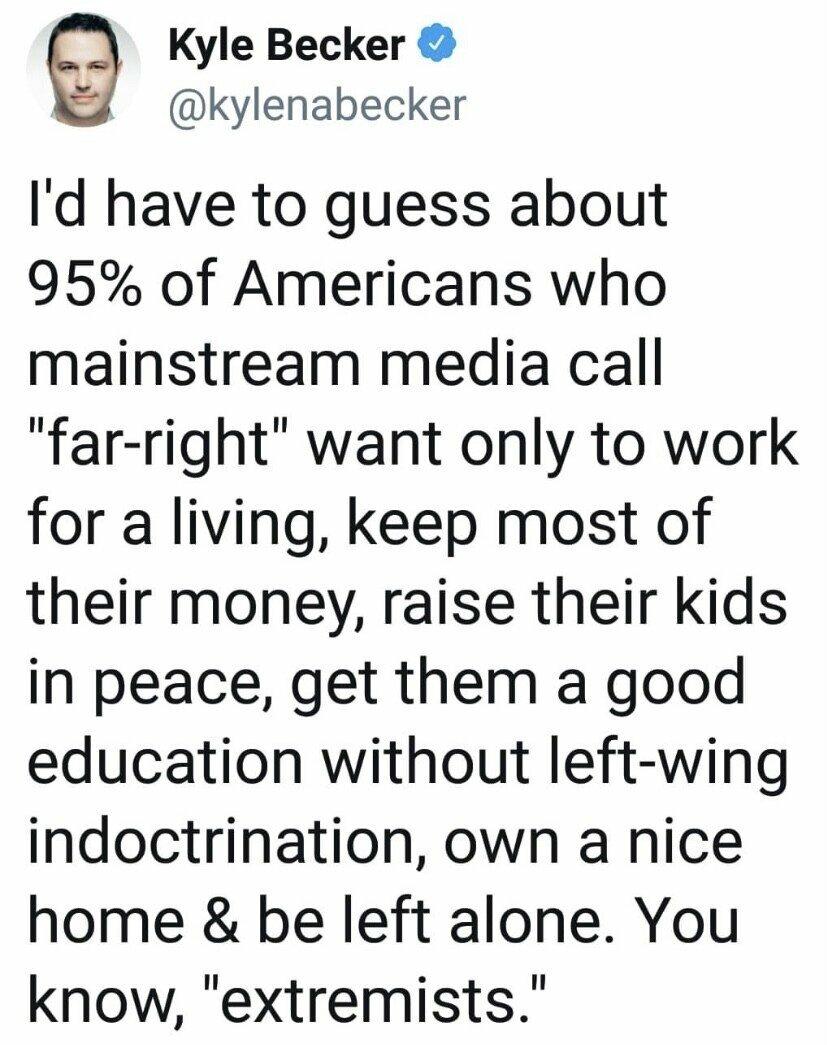 MSM MAKES UP ENEMIES ALL THE TIME... THERE ARE NO "EXTREMISTS" - they just 'made it up' to scare their viewers...

99.9997 if you assume there might be a few good people in the effbeeeye.

I use to feel this way. Now I’d like to see a biblical reckoning brought against every corner of the government. Fire and brimstone. Bring on the Flood.

Come on there was one. You know 26 years ago. Who was anti government so close enough right.

I don't think there has been 1 deadly right adjacent extremist since. Just a summer full of left wing "peace" out there.

Seriously. there is so much peace out there that things are spontaneously combusting, stores are looting themselves, and innocent people are being struck by deadly peace projectiles... while the peaceful domestic terrorists are peacefully protesting.

They constantly use the term "far right" to shift the Overton window. Have you ever noticed that there's no such thing as the "far left" to the media? Yeah, they live at the Left Pole and everything is right from their perspective.

Of course, the real opposite of right isn't left, but wrong. So they should be referred to as wrong and far-wrong, in my view.

MSM MAKES UP ENEMIES ALL THE TIME...

They did a damned good job of making themselves the enemy.

I want to speak my mind and not have FAGGY SHIT shoved into every aspect of culture, I want my MOTHERFUCKING ELECTIONS to be legit, and I want IMMIGRATION TO FUCKING STOP.

ALL immigration. He was right the first time. There are too many unassimilated people here who need time to culturally join America.

No one likes to hear the hard truths. Amen.

Also we need time to round up all of the illegal invaders and eject them from the country.

Exactly. Like most things, there is nothing wrong with legal immigration in moderation, but the floodgates have been opened for far too long and the "melting pot" was overwhelmed decades ago.

Yep, the melting pot is overflowing, so we need to quit adding shit and let it simmer for a while. Maybe even take a little out🤔

Agreed. We should start with deporting criminals and communists.

Another Stormfag. What a surprise.

There needs to be a 10 year Embargo on ALL Immigration until we can stop our Slippery Slope into Communism.

Once we force Democrats to stop giving away money inexchange for Immigrants Votes, we can start winning again.

Yeah. But it's unlikely we can force legislation to stop it that long.

Not with that attitude!

It simply isn't likely. We'd have to control SCOTUS, Congress, and The Presidency for the next 100 years for that to work. As well as every States Government.

Incorrect. Legal immigrants who grew up in communism vote Republican. It's their kids that are the problem because they're brainwashed in school.

the US census bureau and gallup disagree with you.

I’d like to keep all of my money thankyou

Been sayin' it for decades. Here's your 40+ hours, here's your

pound of flesh from that labor, now, unless I infringe upon my fellow's rights...

leave me the fuck alone.

Refuse to acknowledge their “far-right” and “far-left” spectrum narrative. You have communists on one side and MAGA patriots on the other. I know the side I’ll choose.

They are extremists because to leftists anyone refusing to bow down to their total control of every aspect of everyone’s lives is unconscionable.

The far right should have been called the totally right. Boy, did they call it or what?

Ahhh I like that. Past time for some rebranding: The Totally Right and the Far Left.

"The Control Left" is my preferred nomenclature

I would like to keep all of my money, thank you very much. I will disperse it as I see fit, and dispersing it to foreign nations, transgender studies, communist bums, and large corporations is not on the table for me.

The Left believes it has the right to kick you in the balls. If you ask them to stop, you're an "extremist".

Add "and be force to take an experimental therapeutic incorrectly labeled as a vaccine".

It's important to understand that the media and Democrat party knows this, they intentionally call normal people 'extremists' otherwise they'd rightly be called the extremists themselves.

The " far right" people don't post on, or use social media.

And deport the invaders

when that is not possible, there will be war to restore it, and it will be restored...

We need to throw out PERCEIVED injustice, and stick with verifiable injustice

I think that would solve many ills

So while his civilization was collapsing and the masses just kept working and not revolting he was writing his observational documentary? At least it was documented, you know? For posterity.

Are we all not doing the very same right now? Whites are being told they are the root of all the worlds problems. The religious are told they are of less sound mind than trannies. Those with morals are told they don't belong in our current society. People that are self reliant and work for a living are less valued than those that sit on a couch and collect the real workers money.

We are heavily distracted by cakes and entertainment, yet here we are on a forum typing wasted words with no actions behind them as our society falls around us.

But at least for now, we still have the cakes and entertainment.

Unfortunately I think we are still only on step 1 and the weak men don't even know they are weak. The bad times haven't even begun yet.

We're at the tip of the bad times about to take the plunge.

Because this group is the most likely to tell commies to fuck off and stop extorting people.

The people of flyover country that the Democratic and Republican elites in their coastal penthouses could not give a damn about. I might add that this also applies to a majority of people in less-populated and lesser-known areas of blue states, such as upstate New Yorkers, northern Californians ("Free State of Jefferson"), southern Illinois, and Eastern Marylanders.

All true. But its the be left alone part that is the problem. What we have in this country is fascinating and yet scary. A small highly motivated group is simply taking over by force of will.

People always think that revolutions are done by the majority - that the "people" rise up. But in only takes a small group of zealots to get the job done. The left has them - but we do not.

And even the more zealous people that we do have - do not have a good strategy on how to effectively fight back. The mainstream media are making mountains out of molehills - but what is scary about the right is not that they are threat - its that they are so passive and weak..

I'd imagine this is what is was like 20 years ago in Venezuela when things were beginning to turn.. Back then we all thought - man those Venezuela's are not to smart voting for a leftist.

But they probably did not vote for him. He just use his zealous base to "make sure" that he won. And then its been a 23 year slip into horror for them..

The song Somebody's watching me has never been more appropriate

I'm just an average man with an average life I work from nine to five, hey, hell, I pay the price All I want is to be left alone in my average home

In reality, that's exactly what brought us to this point in this country.

And whenever they do finally get fed up, the Feds are stinging them and throw them to prison in inhuman conditions.

20 years ago I would have been considered very liberal. Free speech, against giant corps running the world, anti government corruption, no labels, leave me alone and I'll leave you alone. I'm now considered a far right white supremacist, for holding the exact same beliefs. What a world. What a world.

To be honest that was me a year or two ago.

Now I want every leftist eradicated and to take everything back.

Yes, but the people with purple hair and 200 piercings who want to teach your 5 year old son how to apply mascara, practice Maoism and jerk off in the same lesson are the same, rational folks

Wanting to be left alone is a surefire way not to be.

Sometimes, you gotta get your back up and throw down.

He isn’t wrong. The mass marketable “non-extremist” are money whales that prefer to give corporations everything as long as the corporate overlords parrot their beliefs.

No step on Snek.

And that's why a small number of busy bodies can fuck it up for all of us.

We must start calling them the "alt-left" and also call them "far left".

Use their own horse shit against them!

Federal income tax is illegal. Still the country has lived longer without one than with. And those were the years it was considered the greatest country on earth. We’ve been floating down hill off that since then.

We want to keep ALL of our money.

I'm not far right, but I am very right or absolutely right, take your pick.

I'm beginning to believe that the term "far-right" is equivalent to "people immune to propaganda."

"Far-right" is a euphemism for "cornered"

And have a boat… the government doesn’t have a program to give out boats… yet.

And we, the normal folk, outnumber the nuts.....

It's called "Leave me the FUCK alone!".

Fuck me, I'm a far-right extremist...

And have the ability to protect the above with guns.

They just couldn't handle the 'keep most of our money' part. Playing a game in which they set the rules, only they are allowed to rig, and getting a bailout if they fail just wasn't good enough for them. Nope, 'you'll own nothing and you'll be happy'. Lol, good luck

If by keep "most" of my money you actually mean mean keep "all" my money, then yes. Otherwise, fuck you.