TheDonald
Communities Topics Log In Sign Up
Sign In
Hot
All Posts
Settings
Win uses cookies, which are essential for the site to function. We don't want your data, nor do we share it with anyone. I accept.
DEFAULT COMMUNITIES • All General AskWin Funny Technology Animals Sports Gaming DIY Health Positive Privacy
1360 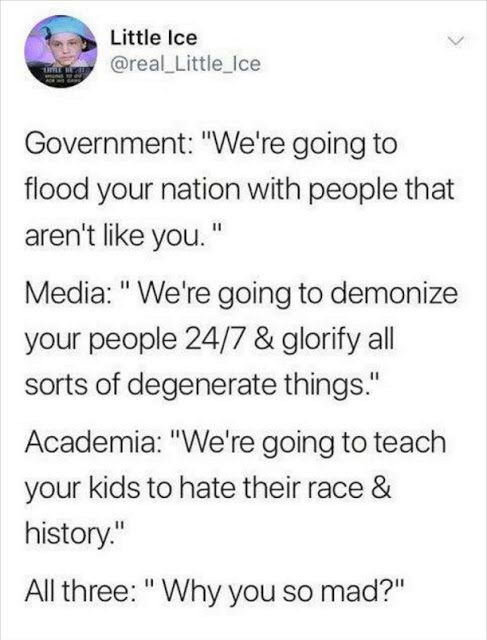 I think the right question is, why aren’t you mad?

"So, let's have a conversation about white fragility, right?"

Who controls the media? Wink wink.

I don’t mind the country being flooded by people “who aren’t like me”.. I just want it done legally. It’s an odd way to word that.

Let’s bring in 70iq ppl who vote for communism and the eventual genocide of whitey..but at least it was legal

If they come over legally, they have every right to vote however they please.

Timothy McVeigh was just ahead of the curve....

India wasn't a Country when the British showed up.

The U.S. formed alliances with the Natives with much intermarriage going on.

Whites never got "Mad" that any of them fought back or that there was conflict. This was the natural way things worked like with the Romans invading Britain, Gaul and Germania or the Peoples you've mentioned who all engaged in Violent Warfare and Territorial takeovers.

White were the only ones to DO SOMETHING with the Lands they Won and make things that didn't exist before Whites showed up.

Do you think that Chicago, Detroit or Denver existed before Whitey came? Did Whitey steal the National Railway System from the Comanche?

My ancestors were ALL invaded by Rome. Did we eventually rid ourselves of their rule? Yes. Did we whine about what they showed us and destroyed it after they left? FUCK NO. We didn't destroy Roads, Bridges, Aqueducts and Bath Houses. We built MORE of them.

That's the main difference between the FUCKING CAVEMEN Whitey dealt with and who Whites dealt with when they were 'colonized' by others. We learned. Non-Whites don't seem to. Just sayin'.

For reasons that suggest either the inability to cooperate as to form a functional civilization or a simple lack of intelligence, half of those people are barely a step above agriculture. The other half are barely a step above running water, something common in ancient Greece 2000+ years ago and mass exported around the world by white men. So unless you hate being able to walk over to the sink for a sip to drink, shut the fuck up forever. Not like you actually give a shit about what happened in India anyway.