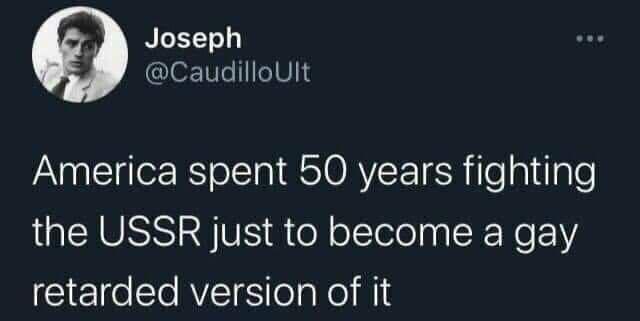 Nothing I said is illegal...but mainly tongue in cheek.

The point is that anytime someone tells you to stop being such a pussy, you automatically assume that person is trying to get you to load a Penske truck with fertilizer.

Nothing about Trump or Trump supporters or the commenters on this sub is "far right." Only glowies believe that or want you to believe it.

Ha!, have you seen the current definition of "far right" in use by the people you don't want to offend?

I got news for you, anyone right of center is now far right and instead of tip toeing on eggshells about being called something that has lost all meaning (i.e. homophobic, racist, etc) you should probably stand for something.

Once again, not asking you to do something illegal, just asking you not to be such a fucking pussy about your beliefs. Seems that's a bridge too far. Enjoy supporting tranny's fucking kids (in about five years).

I'm all for offending Commie retards. But that doesn't require false self-labelling or identification as "far right" or "extremist." Anyone pushing that is trying to hoodwink you/us.

i think a big step to saving us is to remove the direct 1 step association between "right" and "nazi". successfully manufactured over the past decades by the commies. such a huge reason why women and children are left - weaker minds cannot and do not want to have to defend against being called a nazi so they go whatever is the other choice.