TheDonald
Communities Topics Log In Sign Up
Sign In
Hot
All Posts
Settings
Win uses cookies, which are essential for the site to function. We don't want your data, nor do we share it with anyone. I accept.
DEFAULT COMMUNITIES • All General AskWin Funny Technology Animals Sports Gaming DIY Health Positive Privacy
1575 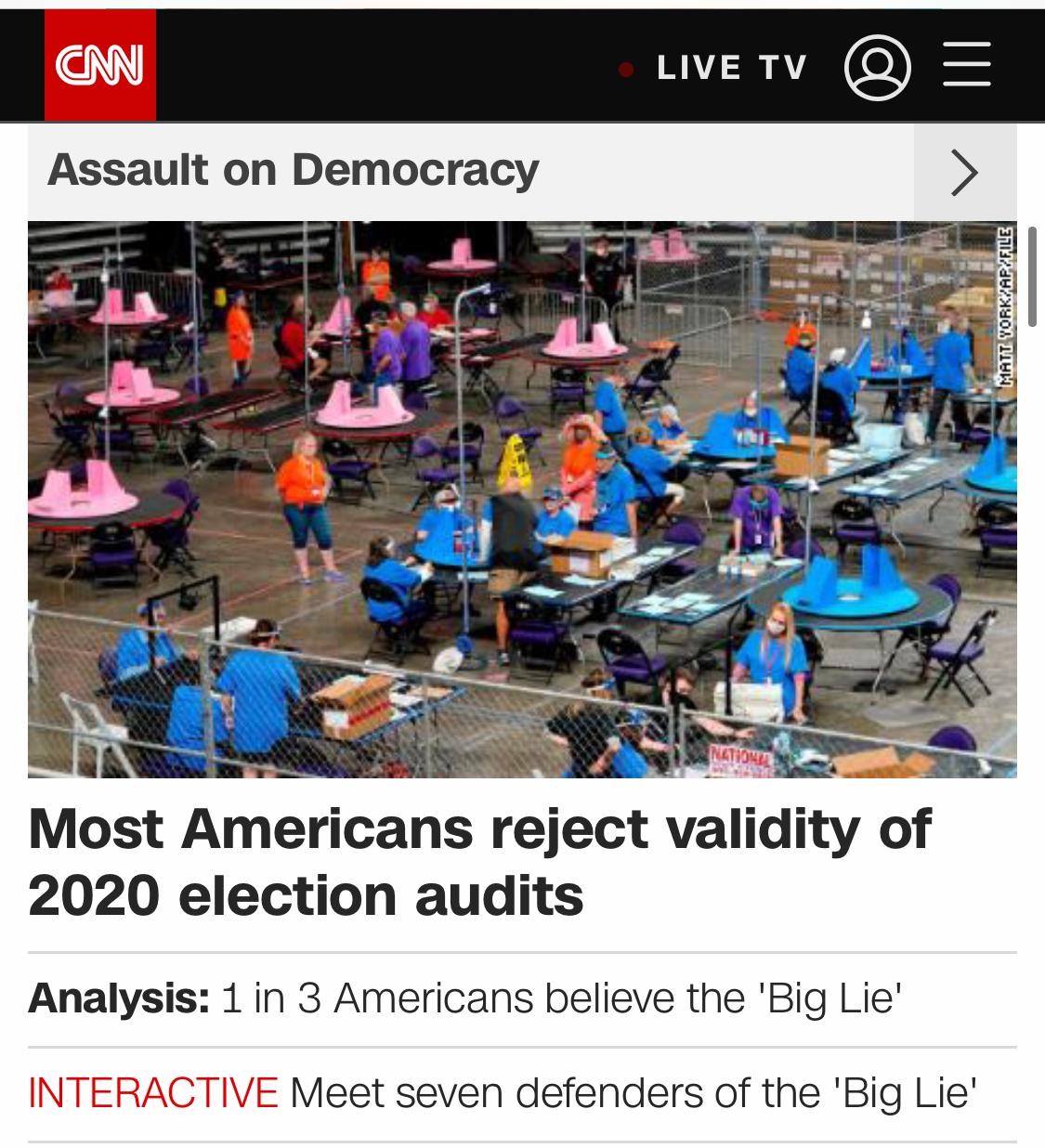 How the fuck would NPCNN know???

Besides they have the dumbest audience... All 37 of them

"NPCCN" LOL I'm going to use that.

Clown News Network was getting old, and i saw that about somewhere, I'm also using Kamala Haharris for that Cackling C$nt

"Most Americans" have no idea the audit is even occurring. Easy to test that yourself by asking your friends on either side

The was no fraud.

There was no widespread fraud.

There was no widespread fraud that could have changed the outcome of the election.

What audit? They've already done loads of audits! It isn't happening if we don't cover it.

The audit's not valid. It totally doesn't matter what it finds because it must be wrong.

So what if there was massive fraud in every state? We got rid of Trump, right? We did what we were told.

1 in 3 isn't most, although I believe >50% of Americans believe the election was invalid.

Also, Hitler started using the term the "big lie" to gain support in exterminating Jews. It's funny to me that Democrats and their propaganda wing are quoting Hitler and using his tactics to build up hatred of the opposition (the GOP) in the same way Hitler used it on the Jews. I hate to be the guy referencing Hitler and all but if the seig heil fits.

Ironically the quote wasn't from Hitler, it was from Goebbels. And he was describing what the Jewish media was doing* to mislead the German people. They literally took his accusation against them, and 180'd it in the history books.

Well, look who controls 80% of international business in the world today and you will see who the victors who wrote the history were in WW2.

Also quite convenient they made themselves out to be the "victims" of the war.

“They” made themselves immune to any and all criticism for the past 80 years and for the foreseeable future.

If you want to know who is in control, look no further than those you aren’t allowed to criticize.

Don’t forget, Hitler freed a suffering and poor post-WWI Germany away from the central banking system (Rothschild owned). On top of debt, the country was also suffering from the rising influence of communism. He erased their debt by simply telling them Germany wasn’t going to play their games and would develop their own economy. That’s how he was able to develop such a strong military and unify/recover Germany so quickly. He freed them from their shackles and proved their independence from the Rothchilds was prosperous and allowed their country to bounce back at an unprecedented rate when they weren’t burdened by arbitrary debts (a debt the loser of WWI would suffer, regardless of side, because the Rothchilds financed both sides to insure someone would pay the interest and be controllable).

This isn’t to excuse any war crimes Hitler may or may not have committed, but there’s a reason no one teaches what happened in Germany between the wars and what lead to the problem.

Rothchilds finance and instigate the First World War for money and power. The losers of WWI suffer terrible economic depression. Degeneracy runs rampant. Communism infiltrated the state (the Nazis blamed Jews for the spread of communism in Termany, which is highly disputed, but there’s a belief it was Russian Jews who kindled the fire of the communist revolution in Russia as well). They tell the Rothchilds “nah, fuck you. We’re not playing this game”, and boom - WWII starts as Germany’s neighboring states (Poland, specifically) begin voting to join Germany in abandoning the central banking system of Europe. We fought that war to insure the Rothchilds didn’t lose economic control over half or more of Europe.

What we’re seeing in the modern US is very similar to post-WWI Germany - the rise of social degeneracy, communist influence, Zionist owned banks and media trying to squeeze money and morale out of the populace. The pendulum will soon swing the opposite direction, and while I hope we don’t follow the exact same path as Nazi Germany, those who desire liberty and are willing to fight for it will only become more brutal and vengeful the longer and harder they’re oppressed.

51% believe the last election was stolen.

Our polling indicates 51%, a majority of U.S. likely voters, believe cheating impacted the 2020 election results, up from 47% just after the November election. Legacy media spends 24/7 demonizing any questioning of the 2020 results. Public trust in them is demonstrated below -

The fact that the have named this the 'Big Lie' shows they are afraid. Such an amateur propaganda move. Don't they know Trump is the master of the every man epithet? Calling it the Big Lie just sounds forced and fake.

I'm confused. 'The Big Lie' is that Biden won.

Hitler liked to use the term "The Big Lie." ADL used to safe guard against those terms.

The ADL and the SPLC became the thing they said they'd fight against.

They are saying The Big Lie is that the election was stolen. So according to them, most people reject it, and only 1 in 3 believe in it.

Who are they asking? 😒

The FBI and CIA operatives that plague their newsrooms
https://greenwald.substack.com/p/questions-about-the-fbis-role-in

I think its far less than 1 in 3 that believe the russian collusion story.

Oh, wrong big lie? You must mean the atlantic soldiers are losers story then.

No? The Kavanaugh was a gang rapist lie? That was a really big, bold faced, obvious lie.

Really? Then it must be the “masks are totally effective” lie? I mean, the 25 years of peer reviewed studies by every developed country on the planet let anyone with a casual google search know that was a load of crap. Surely, thats the big lie you speak of?

They never came to his rallies because of the covid obviously.

Now that the vaccines out we will see the massive crowds coming to hang on his every word.

I really hope someone is making a documentary about the audit

I love how they try to push this this ‘The Big Lie’ narrative. The first I heard of it was at the 2nd impeachment hearing. Don’t they realize that most people know resident Biden was not elected? That is the big lie. This will backfire just like Fake News now means CNN.

It’s so hilarious how they call it “the big lie” as if that will magically make it all untrue and go away. Meanwhile all these people do is lie about everything they’ve ever reported on

Life pro-tip: Any headline you see on CNN (or similar garbage propaganda outlets), you can safely assume the exact opposite is true.

When did CNN cover the Audit?

What are you afraid of, pussy MF'ers??

CNN employees were literally caught on video by Veritas claiming their objective was to "get rid of Trump." Can't really backtrack now!

The ‘Big Lie’ is ‘Biden was elected’.

What's the Big Lie? That Biden is president?

I read that as "Most Americans reject validity of 2020 election results" and I was like, "truth from CNN?"

Bidens win is "The Big Lie". Time to commandeer this just like the term Fake News.

If we make our headline sound believable, people who don’t know what we’re talking about due to our lack of coverage will believe us.

I think they're RIGHT on in the second line... even the first line, if they're talking about the "audits" like the one in GA.

I think that 1 in 3 Americans DO believe the "Big Lie" that Biden got more than 30 million votes.

Good! Everyone knows that CNN always lies so they will think: at least two 2 in 3.

"Most Americans reject validity of 2020 election"

And why not? What is wrong with thoroughly inspecting every aspect of the election votes being counted? Why does everyone trust a vote count that haphazardly went through the night? Why wouldn’t they want to have the audit done just to gloat? I guess for the same reasons I can’t wrap my head around why people romanticize living in a dystopian novel.

This is what puzzles me (ok, it doesnt, but) if the 2020 election was the most "secure and transparent" in history, why wouldn't the Left want to audit all 50 states to prove us Trumpanzees wrong and laugh in our faces? At the rate they've been printing money, they can certainly afford it.

So if most reject the validity of the election and only 1 in 3 believe the "big lie", then this must mean that cnn just admitted, bidens presidency to be the big lie, doesn't it?

IF YOU WON FAIRLY WHY THE FUCK ARE YOU AFRAID OF AN AUDIT. BURN IN HELL CNN!!!

question, if news is non-biased and strictly a form of bringing you "news", shouldn't they be reporting everything as a third party and in the third person? Funny how those that buy in to viewing the MSM spreads don't find anything odd about CNN (who is just a building full of article writers) claiming they know an election was 100% fact legit and even branding claims otherwise as "A Big Lie".

when the SOS from Colorado uses the term "Big Lie" then CNN starts headlining with it, you know the fix is in.

51 % of the country believe election was rigged according ramuessan survey report. It was 47% in December and increased to 51 % in june

C'mon CNN people, you hate Trump with every fiber of your being. Let the world know Trump lost by beating him twice. Once by general election and once by audit. Unless of course you have something to hide. Like maybe you got caught.