TheDonald
Communities Topics Log In Sign Up
Sign In
Hot
All Posts
Settings
Win uses cookies, which are essential for the site to function. We don't want your data, nor do we share it with anyone. I accept.
DEFAULT COMMUNITIES • All General AskWin Funny Technology Animals Sports Gaming DIY Health Positive Privacy
3845

President Trump Statement: There has never been, in our Country’s history, a Border catastrophe like what is currently taking place at our Southern Border. All Biden had to do is leave it the way it was... This is far more than a crisis—our Country is being destroyed! (media.patriots.win) TRUMP STATEMENT
posted 94 days ago by maga_mama_757 94 days ago by maga_mama_757 +3846 / -1 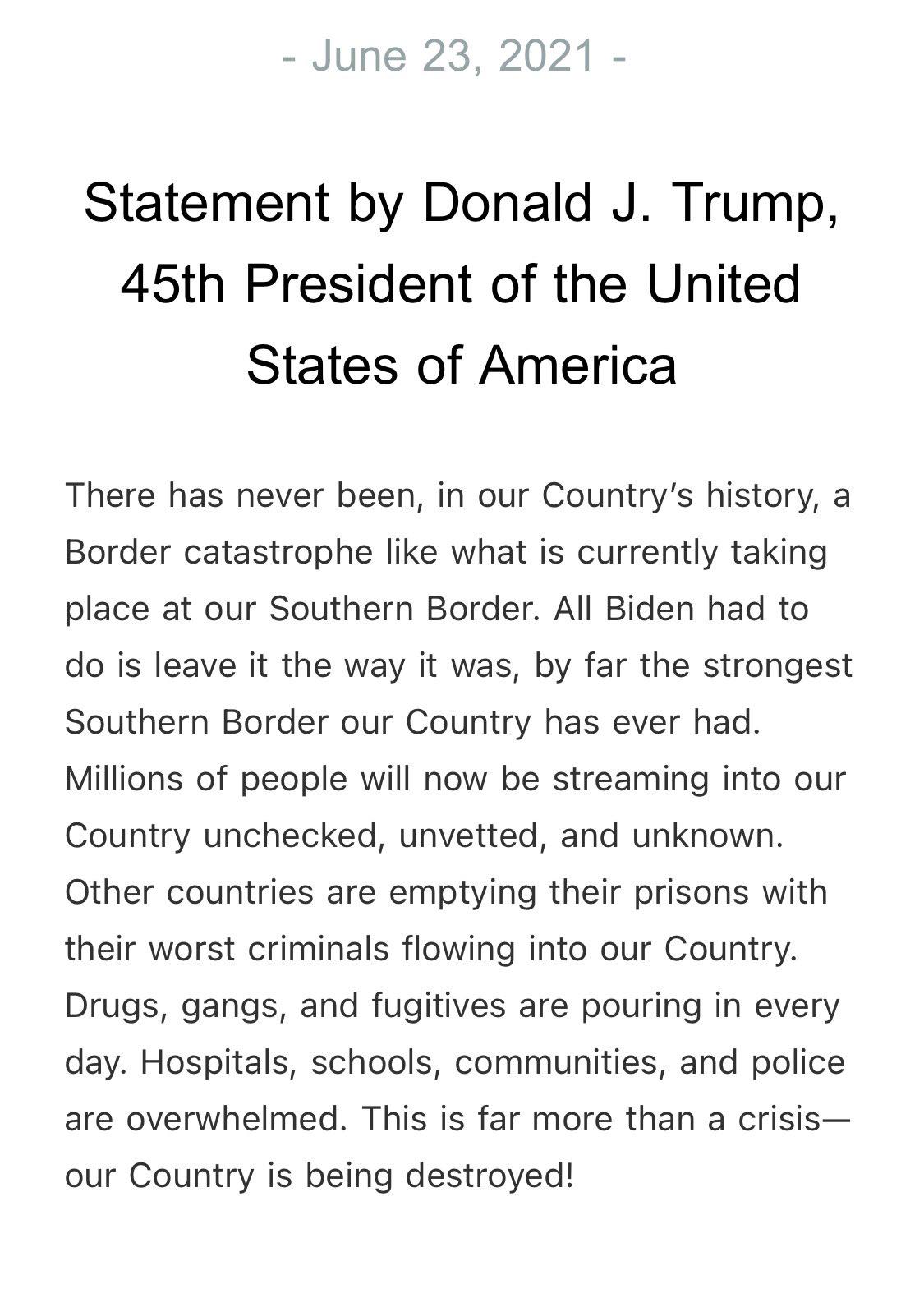 Sure he won but if there are 100 Americans and 50 vote dem and 50 vote repub... out of the 50 that vote Democrat, if you could win 5-10 by having a coherent healthcare plan, why wouldn’t you?

To go back and kick out a sitting president? It won’t happen. Stop trying to. It’s fruitless. Focus on what we can actually do to win more votes.

Bullshit. The real numbers are at least 60 to 40 Republican. The Dimms have been cheating for decades and have successfully stolen at least two Presidential elections. They have used millions of illegal voters, dead voters and multiple voters for years. Why do you think they fight voter ID so vehemently? They know they can't win without massive fraud.

I would tend to agree with that but regardless it’s about winning more people to our side. Why shouldn’t Trump point out the wrongs with the current system and clearly explain how his policy is better than the dems.

He’s already done this with insulin.

He’s already shown a blueprint for allowing states to buy from overseas suppliers. Now he needs states to show how he did this (desantis and abbott to start)

Healthcare is arguably the biggest issue of the day, would it not be grand for Trump to use price transparency and highlight how that single policy change can drive down costs across the board?

I mean if he used real life examples, no one would be able to say at least Biden and Obama have a plan and Trump has no plan. I hear this complaint for healthcare when I discuss with my Lib friends and I have no retort. Literally I had one guy pull up Trumps answer from the debate where he says Obamacare socialism and my plan will be great. Guess what? For many left wingers, Trumps current strategy DOES NOT WORK. That was a piss poor response and again, if we lost by the margins then next election cycle we’ll win by so much that illegals in California and NYC will vote Trump.