TheDonald
Communities Topics Log In Sign Up
Sign In
Hot
All Posts
Settings
Win uses cookies, which are essential for the site to function. We don't want your data, nor do we share it with anyone. I accept.
DEFAULT COMMUNITIES • All General AskWin Funny Technology Animals Sports Gaming DIY Health Positive Privacy
2068 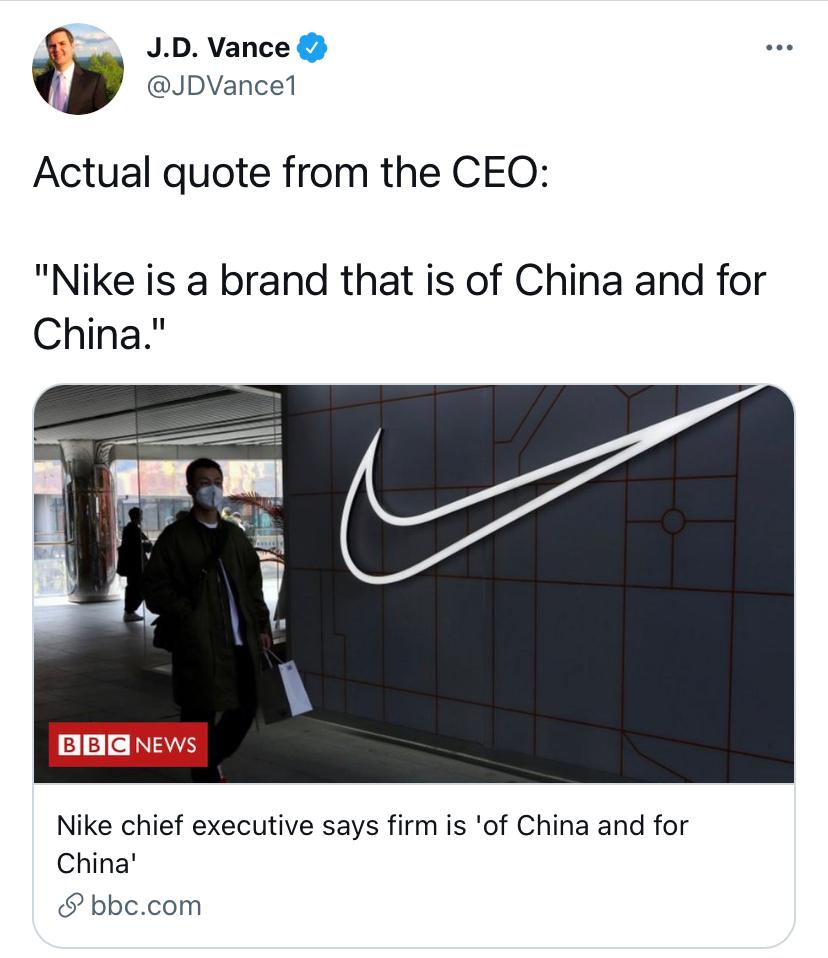 Plus, they're the official sneaker of American Ninja Warrior. I love that show.

Good lord. Sigh. Adding them to my boycott list.

I'm at the point where if I recognize the name of on the list. Pretty much every corporation, save for a few, is cucked.

Funny you mention that. My running shoes are toast and now that the state is open back up, I need some new kicks. New Balance it will be.

Time to organize a buycott of based companies. We must support them and avoid the companies that support leftism.

And here for the boycott: https://cancelthiscompany.com/

I’m laughing because patriots won’t be able to wear sneakers anymore, given all the sneaker companies going woke. Is there a normal sneaker company left?

Is there a normal company left?

Watch their stuff. They only have a few shoes that are made in the U.S. The ones that aren't are from Indonesia or somewhere "not China" though.

I’ve purchased nothing but Adidas for years. I can’t find anything more comfortable.

Adidas are predominantly made in China, and they've been pushing BLM like crazy.

Won’t argue. I’ve bought NB in the past but Adidas running shoes are like clouds.

Did Kanye West ever open his American factory?

I know he talked about it.

Nope. Just talked about himself a bunch.

FILA which is now owned by a South Korean corporation, or an Italian brand Kappa

You'll be comfortable in your rice field with your Adidas.

They are the same cucks who cream their dungarees every time Ted Cruz lets out a spicy tweet but does jack shit after pressing send.

Same faggots forgiving people that supported the Big Lie and turned on Trump.

Addicts to globalism and not my countrymen, may history forget they existed.

I looked around New Balance had some BS also. Best was Asics. Figures that the Japanese are least SJW.

I also prefer Asics. My last pair of New Balance is falling apart after less than a month, even though a previous pair of the same style lasted much longer. Asics are at least more durable than that. Granted I have to buy lower end styles on sale given my low income.

OK so... the heck with that NB CEO's woke statements. BUT. My suede 623s have been the best shoes I have ever had in my entire life. We're talking daily use. I've had Johnston Murphy dress shoes that were pretty solid but they weren't daily use.

I bought these in 2016 and they are still going strong 5 years later.

Their shoes were ALWAYS shit. They made up some broscience about opening up your stride with thick cushioned soles for marketing and the injury rate for running went through the roof and is still there because their shoes are crap that cant protect your feet and force you to slam the ground.

What brand are they going with?

One of them went to Hoka, but she was previously with Under Armor. many people, especially women, left their Nike contracts because Nike was running them to death and also teaming with notorious PED trainer Salazar

So they're not leaving because of the shoes but their shitty training regimes. All I've heard is how advanced the superflies are

I guess you are right. They have high quality racing shoes. But every experience I have had with their training shoes is terrible. They turn into bricks after 50-100 miles. Adidas Ultraboost and Hoka training shoes were miles ahead of Nike's. I am not aware of Nike's advances in trainers in the past 6 years, but before that as a distance runner I would never use their shoes. Your knees will be destroyed before 40. *edit- and racing shoes are basically just a layer of rubber sole, and some light cloth for keep your foot in.. Training shoes are the shoes that you spend 95% of your time in and that need tech and protect your knees *

Thats always been Nikes lol. From day 1 they were a sham.

Nike loves that slave labor. They will move their manufacturing wherever they can save a few cents on a pair.

As a kid, I lived in South Korea on and off in the late 1970s and the first half of the 1980s (went to American schools). Factory seconds were widely available "on the economy" for less than $5 a pair, and Nike was the dominant brand.

In the 1970s, Korean kids had to take entrance exams to get into middle school and then later to get into high school. Those who didn't make the cut went to work.

As bad as that sounds, orphans were completely screwed and were groomed from an early age for factory production work. The concept of sweatshops is heartbreaking because they turn the most unfortunate of little ones into factory machinery.

Kmart sale without the sale lol

An attack on Nike is an attack on science itself. And don't bother booing, you're really only booing yourself!

Ain't bought that shit since Tiger Woods wanted to play at a white golf course. Saw their wokeness then.

I remember they kicked Tiger off a driving range for being black. The manager said, "You can hit balls at a public course. "It's about a nice long 3-wood shot that way," making a pointing gesture.

Tiger replied, "Do you have any idea who I am?"

I admit I have still been wearing Nike. And my kids have. And I admit im a fucking idiot for doing it. Today officially I won’t buy their shit anymore. I learned my lesson. Fuck Nike

Understand. It’s hard to keep up with every last thing against our morals and values.

They have made their choice. They can live off China and not the USA.

They want to live off China. Look at the population difference. It’s why all the corporations bow to China.

Well they do make everything there, at least he's honest about it I guess

Saucony is a Supreme shoe, unfortunately I think they're made in china also :(

Sucking that dick in public, gross!

I tossed mine awhile back

This is the free market working as intended. It stopped working for us as soon as another country had more consumers. But some people can't think outside the box ?

Yes, Nike is made "of" the lives of Chinese people in sweatshops, "for" the benefit of the Chinese Communist Party.

You guys are still buying from China?

He sits on the board of directors for Disney as well.

"We'll be back after the CCP denies us permission to sell"

So who can we buy for good quality athletic gear. Under Armour cucked. Nike cucked. Adidas is just as bad. New Balance is lib. I'm running out of tennis shoes and Kanye West yeezys are out of my price range!

I stopped years ago with Nike. Learned about their child salve labor camps done with them. Dont worry liberals whos all about minorities love them some Nike and China.

I made a new post,
mainly about BLM, but it also points to this one with news about Nike and China.

seems I will never buy, nor support ANY shoes or anything from this company ever again, fuck them and I hope they burn.

Purchases of overpriced shoes and votes for democrats are correlated in more than one way.

Well, okay then. No surprise there.

I boycotted Nike long time ago as soon as I realized they were liberal and for blood factories.

But I didn't see this statement a problem from business perspective. let's be cool and focus on bigger stuff.

https://www.youtube.com/watch?v=iIDmIxQ4dss&ab_channel=BrysonGray Thats why I guess he said fuck Nike I only wear Addidas

Nobody is willing to watch a :15 second ad to see your response...