TheDonald
Communities Topics Log In Sign Up
Sign In
Hot
All Posts
Settings
Win uses cookies, which are essential for the site to function. We don't want your data, nor do we share it with anyone. I accept.
DEFAULT COMMUNITIES • All General AskWin Funny Technology Animals Sports Gaming DIY Health Positive Privacy
2698 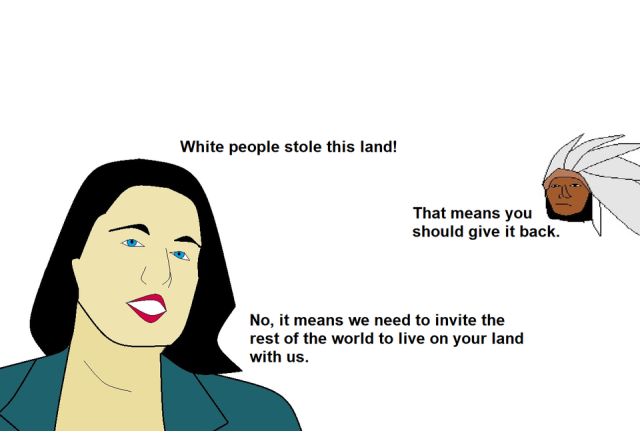 They do that with everything

"We need to increase taxes to pay for XYZ for people"

"No not my taxes, I mean everyone elses taxes!"

"White people have too many jobs, we need more black and Hispanic people to take the jobs"

"Okay give up your job to a black person"

"No not my job, I mean take other white peoples jobs!"

The essence of a NIMBY progressive.

There is no price they wont make someone else pay for their sense of ethics.

One rule for thee, another for me

Jordan Peterson asks the job question of a posh feminist:

Watching her mental gymnastics was infuriating. Such a waste of intellect.

They are stupid and don't deserve freedom others have provided.

They have literal jobs that enforce wokeness to steal jobs from whites to give to non whites.

Whether Clovis toolmaking technology was native to the Americas or originated through influences from elsewhere is a contentious issue among archaeologists. Lithic antecedents of Clovis points have not been found in northeast Asia, from where the first human inhabitants of the Americas are believed by the majority of archaeologists to have originated. Strong similarities with points produced by the Solutrean culture in the Iberian peninsula of Europe have been noted, leading to the controversial Solutrean hypothesis, which states that the technology was introduced by hunters traversing the Atlantic ice-shelf and suggests that some of the first American humans were European.

Solutrean hypothesis is actually a theory. And it makes a fuck ton more sense. Far easier for a sea-going people in small boats to follow ice sheet from Europe to the US. Steady supply of fresh water (ice) and food (seals).

There is actually some interesting evidence that this is the case. Entertain this line of thought for a minute.

We are taught that the first Europeans were "misidentified" as gods by the Indians, because of their white skin. American Indian culture deities were all personas that gave them valuable tools, fire, light, etc. Their idea of gods were extremely pagan, not so unlike the Watchers in Enoch or "angels" in Genesis that provided man with metallurgy and taught us hygiene. There's a very very good chance that these deities/angels were real people that were many many years ahead of their time and were gifted individuals who pushed civilization in a way that we as modern society would equate to people like Tesla, Aristotle, Plato, or Benjamin Franklin.

Why would the Indians misidentify white Europeans as gods rather than as enemies, as many cannibal islanders identify foreigners as? This implies they had some form of contact many generations in the past that was documented in their mythos. Furthermore, there has been a history of European style statues and busts being discovered in Maine and other parts of that coast that predate anything in the US, but are covered up by the Smithsonian. I'll see if I can find a link to one such find, but it's difficult to track.

There's also the case of early European explorers documenting the "Patagonian Giants" in South America- a village of cannibals with lighter skin that had an avg height of 6'6 or 7'6 estimated that seems to have disappeared. Another village of bald white cannibals in Florida was documented by early Spanish explorers, and then there's the group of red haired, green eyed cannibals at Lovelock cave that persisted even into the early 1800s as a popular myth in local Indian tribes- with skeletons over 6' tall when the cave was excavated years later.

Think Iberia not Siberia was the slogan 50 years ago.

Can you give us a link please. I’d love to read more fren.

I think there's also genetic and linguistic evidence to support this too.

It’s a simple as that. Not to mention they were conquering, and even eating each other sometimes.

I don't believe the whole propaganda.

Here's how I see it. Imagine Indians and Americans trying to live side by side with one another. Americans wanna build something but the Indians say "don't do that. That's a sacred rock, tree, whatever. We once had a ritual there years ago, it is sacred! Do not destroy it!"

So they moved a stupid rock or tree, the Savage Indians saw it as blasphemous, and war happened.

I believe THIS story...more than. Evil Whitey murder innocent Indian! Take everything from the naked fuckin' Indian. If he's naked, not much to take because he doesn't do much does he? :P

It would make sense, and may even be a bit of both. Bottom line is that after seeing the Bolshevik manipulation of both the present as it’s happening, and the recent past in the last 6 years, I no longer believe the official story of anything anymore. If they are able to convince people that their own eyes are lying when we have the ability to watch video of events over and over again, imagine how much they lied about shit when the only documentation of events was the writing of man. Just look at some of the small things they were willing to lie about(trump and the feeding of the gold fish as a quick example). If they were willing to lie about that, imagine how they lie about shit that really matters. Shit, they tried to convince the American people to back a conflict from some video of the Kentucky gun range they purposely misrepresented.

we conquered tribes that were regularly conquering other tribes.

so tired of people lumping all tribes together as "native americans". many of them hated each other more than they hated the white man!

tribes were raiding, killing, raping and enslaving other tribes for centuries before we even stepped foot on "their" land...

Taking back from the proto-Russians, damn those proto-commies stole it first.

It was never "their land". They came from somewhere else and they had no concept of ownership

How can it be theirs if people aren't supposed to be able to just "own" land? Theirs implies ownership or property right.s

Stone Age Europeans were first native Americans. When The Vikings had sailed to North America, they discovered that the Indians they met on the East coast were as white as them, - their 'Native American' language had many similarities to an old Norse dialect. Also, they used little Axes- and kept the Norse tradition of the size and shape- making them balanced for throwing.

how did they get over there?

Many American Indians on the east coast have some [non-Asian] European Dna and were taller, and as pale-if not more, then the European 's that first landed and encountered them. The land masses are close enough to have sailed, and replenished supplies in early Iceage.

-It is even in the paintings of the first encounters of Indians in the 'new world' by European explorers.

Look at some of them. *Look at how Tall they are- Mohicans are distinctively different than Crow or Zuni Indians. Red hair and Black hair make brown hair.

They don't bring up the fossil record in history or bring you to local museums anymore? [Our Education system went from the best to shit for diversity, ;/]

I remember reading about a tribe that nobody really knows their origin but they were noted to have similarities to Europeans, thought to be Welsh or Scandinavian.

I forget the name of the tribe but I think they were mostly killed/raped by other tribes and though they're still around today less than 10 people are thought to speak their tribes language.

I hate when it's described that we stole their land. Makes it sound like it was some sort of bank fraud. We conquered this land, we had a war we killed them and took their stuff. That's not stealing that's conquering

And we made it into the most prosperous land in the history of the Earth, as opposed to a smattering of warring tribes.

Yup. And also its not like they just popped into existence when the west arrived. They had just as many years of existence on earth and had made almost zero technological progress relative to europeans.

The tribes killed and sometimes cannibalized eachother. Blood and human sacrifice. They werent these noble people living all hippy dippy in harmony. Theres a reason they were called savages.

That's where the commie screams of "de-colonizing" come from - accusing others of exactly what crimes they are doing.

We're a nation of citizens, not immigrants.

That fuckin cunts face ENRAGES ME TO NO END!!! Almost to the point if i want to kick the shit out of the first purple haired fuckin libcuck i see today. Ny has alot

How the fuck did the lefty sheep become stupid as fuck...

A handful of social media companies based in Silicon Valley have been allowed to setup what is effectively a monopoly on public discourse.

How true is that.

Property rights are a hallmark of civilization.

Native Americans continued to own black slaves 2 years after slavery was abolished in the United States.

Where Don Cheadle at?

Also the left: property is theft.

Several native tribes fought ON BEHALF of the Confederacy, i.e. for slavery, and when they lost they got the boot and we call that territory Oklahoma now.

It means remove all references to indians that honor them and give money to black people and illegal aliens, while ignoring homeless veterans who fought for their freedom.