TheDonald
Communities Topics Log In Sign Up
Sign In
Hot
All Posts
Settings
Win uses cookies, which are essential for the site to function. We don't want your data, nor do we share it with anyone. I accept.
DEFAULT COMMUNITIES • All General AskWin Funny Technology Animals Sports Gaming DIY Health Positive Privacy
3691 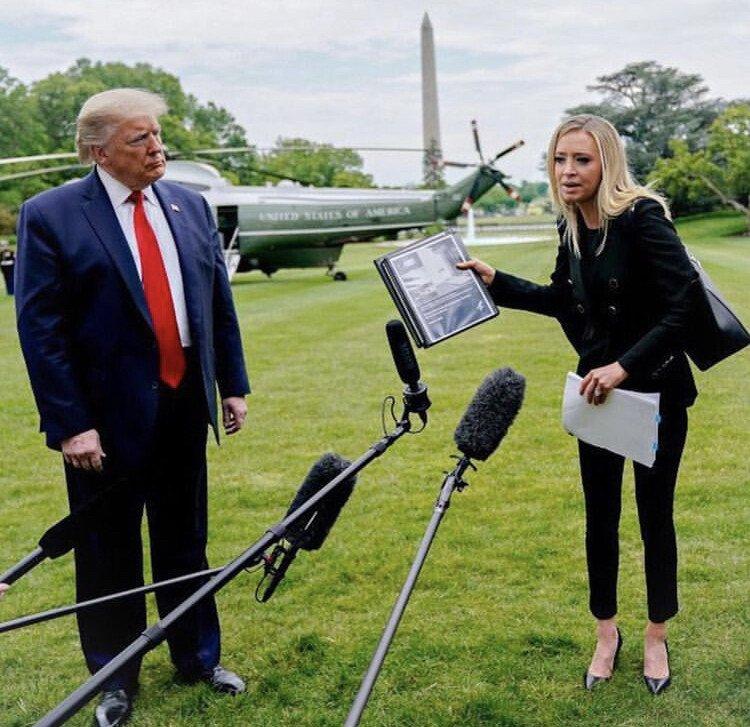 It always made me smile when some jerk in the press core would ask her a dishonest "gotcha" question, and she would get that little smirk on her face, and start flipping through her binder...

You just knew that the hammer was about to come down.

Made her press conferences unplayable and quotable for their commie rags. She literally put a wall up on bad press and was an inspiration on everyone who saw her in action on how to slay leftists.

I think handsome is a better description.
Definitely unTRUMPable.

The counter to the media is telling the truth. It's like holy water or garlic. It makes them shrivel up and turn to dust

She did great as Press Secretary but FOX has sullied her ‘brand’ (speaking out of ignorance a bit since I won’t watch Fox so I haven’t seen her appearances — maybe she’s fighting where she can be most effective).

I trust Trump — and those around him only as long as they are doing exactly what he wants them to do. The minute they’re outta the ‘Trump zone’ they’re back to having to prove themselves all over again. Same thing with endorsements. You get a Trump endorsement, you get a vote. That doesn’t mean I trust you, or even that I think Trump does.

There are benefits to ‘transactional relationships’.

She’s at FOX for recon starting to play the Demo’s game.

Has she explicitly acknowledged the steal or self-censoring for FOX?

I love that Kayleigh was always equipped with her binders full of facts.

That photo of all the hundred of different tabs all organised, she meant business

I cant get enough of that woman.

It made me happy when Sarah was there because she was just as brutal and knew most of the information outright.

Kayleigh, she came prepared every time, took the standard Sarah put up and then added an innocent and 'weak-looking' appearance on it. The left felt empowered to attack her and Trump through her.

Then, then that damn smirk would come out. I swear, I think the masks in the press conference room during COVID Scamdemic was to cover up the amount of self-shitting the press was doing in that room.

Dr. Jill Biden makes the cover of Vogue, but Kayleigh and Melania don't. Our media is a fucking joke.

Just get a useless, online doctorate!

How many people buy Vogue?

How many Trump Supporters are oogling Kayleigh and Melania?

ONE side has ACTUAL people in it. REAL people. Not fictional cartoon, dead characters.

Kayleigh and Melania DID spoil us. From "Michael" Obama to them. And back to those.....Trannie Swamp things...

Yea it feels like we could say this for almost every large media outlet in america right now. Like "I can't believe how the new York times lied about him"

Irrelevant rags that will die out soon enough. Not even leftists buy that garbage.

She would best serve as the PS again.

I'd prefer someone like Candace Owens to take the role next time. Someone that the left cannot attack without appearing racist and sexist at the same time.

I like Candace, but we're not the Left and don't need to play Leftist games, even if it's satisfying to flip the tables on them.

We should focus on the person who will best do the job. That might even be Candace.

Candace would certainly be a good choice. Can't possibly be worse than Pence. Either way its good news because Trump will actually be able to choose who is VP this time!

Candace is a grifter. She first popped in my radar when she tried to launch a doxxing database of "toxic men" during Gamergate, and she's been flailing about since then until she found her current shtick. She's just a snake.

The left never considers it racist when they attack a conservative. Candace could be transgendered and islamic and they would still attack her.

Too much transparency. These two people are too genuine and real. People want to fake controlled puppets.

Far too generalization on 'people' there. That would appear that you group pedes in with wanting fake controlled puppets in power.

Pedes are not people ?

These "number of x who agree" posts are just the cheapest shit on this site, of course everyone on a forum that used to be called the Donald, with his face as the logo would want him back, lord, it's just meaningless internet points

Yep, I downvote all vote harvesting posts regardless of how much I agree with the message. This just behavior just feeds into account sellers or people who really should be getting their validation from the real world by creating things and being useful.

Not saying that doesn't happen, but if you check this guy's other posts they are generally high quality.

I'd agree with both points on this sub-thread. Click farming is a bit weak, but OP is otherwise a quality poster.

I'd rather see her as VP than Cackling Harris.

With a 50/50 Senate, Kamala would be the deciding vote on who gets to be VP.

If fraud vitiates everything, her election to VP would be null and void, and there'd be no VP to break the tie. They'd have to keep voting until Mitt Romney sells us out. That's a bit of a joke, but it is entirely possible to have a Trump/Harris exec branch.

How well would you sleep with her as your VP?

The people who were originally calling him Silver Pence were far more prophetic.

Well, she supports vaccines and threw Jan 6 under the bus. I did enjoy the pressers though

Her and Sarah are the best Press Secretaries ever. I’d probably give Kayleigh a slight edge bc by the time she became Secretary the press was, amazingly, even more hostile.

I’m worried about Sarah here in Arkansas. Admittedly she is the probably best bet for Governor against a long list of useless RINO’s, but I have a feeling she was just doing a job for her boss, while Kayleigh BELIEVED in MAGA.

Huckabee’s are politicians, and her dad was more RINO than MAGA. I do not trust Sarah to not be another RINO.

Kayleigh was one of the few that never backstabbed Trump. And Trump helped her and was there through some personal shit behind the scenes too. He’s a good guy and she’s a good person too.

Finally something worth circling back to!

IM GLAD YOU ASKED THAT QUESTION

What is she doing these days?

K-mac was amazing Pzaki is dog shit I would say that regardless of who's press sec she is.

I'd like to see them back together with Pence too. The difference being that they are standing outside his prison cell.

She has written a book about her time in the WH with Trump called "For Such A Time As This". It's available for preorder on Amazon right now. I think I'm going to get it.

Can't remember where I saw her interview talking about the book but she apparently shares a lot about the stuff happening behind the scenes. I feel it will probably be the most honest account of what it was like in the Trump administration yet.

Side note: It seems that GEOTUS has shed a few lbs since he “left” office. He’s been looking good!

It was probably kevlar

Keep her, but ditch the EVERLOVING FUCK out of Kellyanne Conway.

If she's involved with 2024 at all, I'm out. That bitch should have been fired the first time that she couldn't put a muzzle on her piece of shit husband.

So beautiful and smart I love watching her own the activist propaganda press pool.

Based Kayleesi and Stephen Miller should have a daughter, then she could marry Barron and the two of them could give birth to the prophesied MAGA Child

Ah yesss. Kayleigh "Destroyer of Worlds" McEnany, and the Binder of Life.

All three of them ... Marine One included

The sooner the better.

Notice how neither of them float in from of the book mic's inexplicably......

One can sit on my face and the other can be the Press Secretary again.

She’s cuter when all you can see is the top half. Weird legs

Hadn't seen this before, I prefer this version.

I would never have recognized that pic as Kayleigh.

I have it on good sources she is a narcissist who only cares about herself.

She got a job at Fox instead of Newsmax, OANN, or Real America’s Voice.

That alone should tell you everything you need to know about her priorities.

Who hurt this woman's ankles???

I won't be voting for Trump next time. He squandered 4 years with horrible decisions. And I was the biggest Trump supporter in our town.

I’m still undecided and very cautious about Desantis, but you aren’t wrong about the past 4 years.

No one can honestly tell themselves that Trump will do what HAS to be done to revive America from her grave. He is just not the person for that.

Will Trump disband traitorous three-letter agencies? Nope. Will he reverse every socialist and insane enactment of the left? Nope. Use XO’s to level everything while ignoring the useless SCOTUS? Nope. Completely ignore and treat everyone who did not stand up against the coup as mortal enemies and do everything he can to destroy them? Nope. Fire every commanding officer who turned out military into a useless queer-filled fraternity? Nope.

He will be back to “making deals” and getting trampled again in no time. There is no longer any room for “deals”. Scorched Earth or GTFO.

Heels are very awkward on grass, but they're fine if you learn to walk in them properly (and don't wear them every day). A bit part of her awkward stance here is that she's trying to carry a big purse and keep it from falling while also holding binders and papers. She would standing weirdly in flats too, just because she's carrying too much and it's not balanced.

Why couldn't we get closeups of her ankles ?

What in the hell is wrong with her feet and ankles?

She's in heels on the grass.

She kinda hot tho. Made me struggle to get through a press briefing without rubbing one out.