TheDonald
Communities Topics Log In Sign Up
Sign In
Hot
All Posts
Settings
Win uses cookies, which are essential for the site to function. We don't want your data, nor do we share it with anyone. I accept.
DEFAULT COMMUNITIES • All General AskWin Funny Technology Animals Sports Gaming DIY Health Positive Privacy
1986 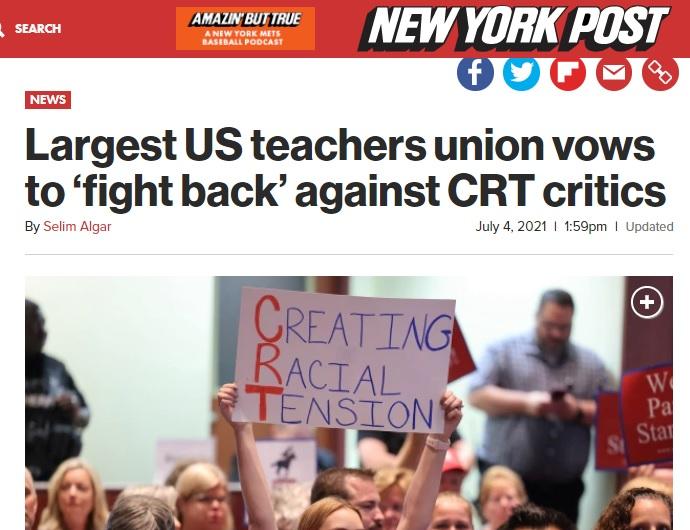 there is nothing that teachers did during COVID that youtube could not do instead. it became abundantly obvious as time went on.

Seems they're both pretty good at censoring dissenting thought.

They actively make your kids stupider. I had to spend 5 months teaching my niece how to do basic math after she came to me talking about how she would fail the SAT. I had to explain what a percentage point was!

This is 12? years of public education people. I helped her out and now she's where she always wanted to be. A happy mother of 2 and not in college. The math comes in handy for budgeting and baking.

That's actually not true at all. Here in TX our state test results just came out. Kids are behind big time in several subjects. Online school was such a mistake. Now us teachers have to pour our heart and souls, more so than ever, into this Fall and try to get these poor kids back on track.

Then that was the parents fault

Yes and no. Kids who showed up every day still struggled. Nothing is the same as getting that one on one attention with the teacher.

Teachers unions are Marxists. So many of them are more ignorant and less educated than their students. I call them educated idiots.

Teachers unions are a pipeline from members' purses to demoncrat coffers. I know. I was forced into a teachers union even though not even close to being a teacher. Was a (mainframe computing era) sysop.

I hate teachers commie-fuck unions with a burning passion!

Our teachers are scum. Change my mind.

They are much worse than that.

Teacher unions have been protecting garbage teachers for decades. Break them up.

your teachers may be scum but my wife is a teacher and a Trump supporter and so are the vast majority of her colleagues. not all teachers are buying into this liberal totalitarian crap. there are bad teachers/administration at every school, just like at every job you ever had. the problem is shit rolls down hill and teachers are at the bottom. stop looking at the bottom of the hill and start looking from whence the shit is coming

I'm a teacher in Fairfax County, VA. Behind enemy lines. Believe me- its far from all teachers! The trouble is that this CRT bullshit is heavily pushed by the English and History departments. It only takes a one crazed lib to drag down the whole school! No one wants to lose their job for speaking up against this shit. Instead we have a mass exodus of students and teachers to private education. All we do is fall back. Where do we draw the line? "This far and no further?"

Report then as pedophiles, because pretty much every CRT supporter is.

Our children are being harmed intentionally -- this IS the line.

Well we can start by destroying the teachers union. No one can fight back because the union protects terrible teachers

You either are a Patriot or you side with commies. The choice is pretty simple. Keep silent, keep your job, or be the truth and fight this evil, though you may lose that job.

I know how I would choose, I have done it before, walked away from a 100K yr gig, cause of principles.

Education, like entertainment, has been subverted by the communists, as per their well documented plan. It's pure evil. Once an institution is subverted the communists weed out all dissenters. This is what is happening with our military right now.

My grandmother was a teacher back in the '60s and '70s and she was based AF. She passed away back in 2003 after a long life, well lived, and I'm grateful that she didn't have to experience Clown World. She could never have been a teacher in the current environment, and our country needs teachers like her, desperately.

GOOD. Let the presumption of credibility die, once and for all.

99% of teachers in public schools are child abusers.

No, not by the usual definition, but by hurting and punishing children, and allowing others to as well. But some may be by the expected definition too.

A teacher telling a white child they are bad because of their skin color, that is child abuse.

A teacher not teaching the white, and other children, because they need to spend most of their time with the 25 year old illegal "child" from Central America, that is holding back and hurting the real children in the class.

The teachers that laugh it up as the "minority" students injure the few white children, evil people.

The San Diego schools that were going to mark white children lower than others, for the same results on tests, very evil.

When a teacher, and they are often white, tells the kindergarten white child they are not nice because of their skin color, that might as well be attempted murder. Unbelievable that any parent will actually allow that abuse of their child.

As soon as one teacher, or principal, says anything to one of their children, they invade the school and get their way.

"Critical race theory, the 1619 Project and the crusade against American history is toxic propaganda, ideological poison, that, if not removed, will dissolve the civic bonds that tie us together, will destroy our country,"

Not sorry, but hate teachers, and hate unions.

Teacher unions are some of the most evil groups in existence.

Never to public schools, keep your children safe and away from indoctrination, expect maybe in rural Wyoming or somewhere safe from the illiterate, commie-loving, stupid, evil teacher unions.

Only the government ones.

Teachers were respected until feminists took over. Now it's a shitshow like everything else they touch.

We need conservative teachers, who aren't afraid to let parents see EXACTLY what is being taught and who will teach core American values.

We need conservative parents who aren't afraid to COMMUNICATE (not scream) with teachers when they have a concern.

We need conservative organizations to PROTEST at school board meetings when parent concerns aren't addressed.

Why don't we create "unions" for families to help combat the things we don't like about our schools? Sign pledges and threaten mass walkouts and protests if demands aren't met?

Dumbfuckery on an epic scale.

So we are supposed to listen to them because they're goal is to teach less and make more money doing it. Part of the plan?

Same w docs n nurses! They are all wastes of skin!

True. Politicized medicine is dangerous. No one knows who they can trust with their most personal and private decisions.

The first step in dumbing down our children was dumbing down the teachers. Bill Ayers and Bernardine Dohrn did that starting in the late 60s'.

To be fair, I've had maybe 2 decent teachers and this was long before they went full blown predator communist. But yes, they're now worse.

Teachers are absolutely worthless. They are all self righteous, power hungry, losers who are unqualified to do anything, let alone teach our children. They complain about their pay (often times $50-90k per year) while getting PTO of >4 months out of the year. They use their positions of power to manipulate our children to follow their own wrapped political beliefs. If the children fight back, we'll, their goes their GPA.

This country needs to seriously gut our education system of these useless fucks.

State and federal employee unions who are paid through tax revenues should be illegal.

They vow to fight back against CRT critics - AKA THE PARENTS of their students. Fuck them

It's like fireman refusing to put out your house fire because they think your fashion sense is askew.

No more tax increases for the noble “teachers “

Teachers treated me like shit in school. Take your kids out of public school. Or go to the board meetings and tear them a new asshole.

If you love your kids, HOMESCHOOL them.

They have lost all market accountability. In a normal world, when somebody is an ass, you can just simply not do business wit them. In clown world, they actually get more government funding.

There are many of us fighting for your kids. I switched careers to become a teacher. Lots of us have your back, we just aren't vocal about it. We worry about our kids in our classrooms. That's where change happens.

To be honest, I haven't even encountered critical race theory as of yet in any school. I was in 5 schools over 2 years with my college program. Even in the gay pride stupid ass liberal elementary schools, they still taught normal curriculum. I wonder if these CRT things are very specific to certain locations, NY specifically. Regardless, my kids will know what it means to be an American. It kinda stinks though, I won't get to teach very much American history. Texas 4th grade curriculum is all Texas history, the whole year 🤣

Least competitive, easiest entry, all of them American university educated. Any wonder teachers are such lefties?

Teachers in this country have been shit since the 1960s. That's when they changed all the tests so the tests wouldn't be racist anymore.

After that, the left took over education very quickly.

What do you expect from alcoholic cat ladies?

I am in a rural location surrounded unfortunately by teachers.

I can state unequivocally that they are among the stupidest people in the world.

Fuck teachers, they should not be allowed to breed.

When you try to remove a circuit breaker without turning off the power, you deserve to die but not teach my children.

This is an excellent description of it. I have zero respect for teachers

Give them a choice. Quit the union and keep your job. Otherwise, YOU'RE FIRED.