TheDonald
Communities Topics Log In Sign Up
Sign In
Hot
All Posts
Settings
Win uses cookies, which are essential for the site to function. We don't want your data, nor do we share it with anyone. I accept.
DEFAULT COMMUNITIES • All General AskWin Funny Technology Animals Sports Gaming DIY Health Positive Privacy
4323 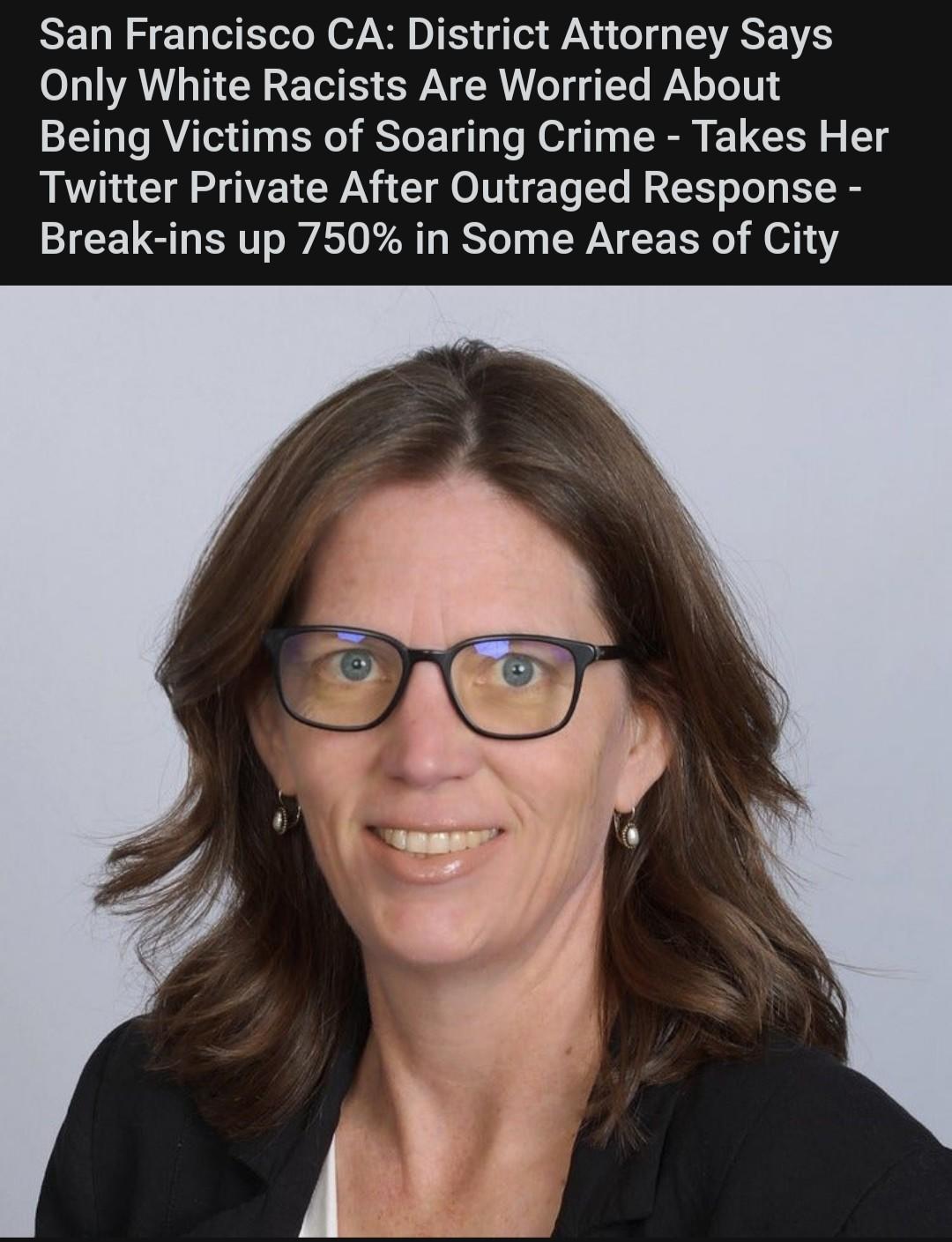 A senior official in the San Francisco District Attorney's office linked fears of a crime surge to racism in a tweet that raised eyebrows Sunday evening.

SAN FRANCISCO CAR BREAK-INS UP OVER 750% IN SOME AREAS, POLICE SAY

"'Husbands are scared for their wives' —-your reminder that the ‘crime surge’ crowd shares the same ideology as The Birth of a Nation," Chatfield fired back, referring to an early 20th century White supremacist film.

Chatfield locked her Twitter account – making it so only her followers can see her tweets – after her comment about crime fears drew sharp criticism online. Boudin's office didn't immediately return Fox News' request for comment.

Reports of vehicle break-ins in San Francisco were up by between 100% and over 750% in parts of the Golden City, according to the police department's most recent monthly statistics.

The number of thefts from vehicles reported citywide in the month of May was more than double, from 923 in 2020 to 1891 the same month in 2021, San Francisco Police Department (SFPD) data shows.

The department has not yet released statistics for the month of June.

I can't believe what I'm reading and seeing. Even back in 2015 as we ran up toward the election and Trump had announced his candidacy I thought this communist revolution was going to be a short lived novelty - I remember telling my wife at dinner back then we turning socialist in sort of a jest - and we both laughed about it.

But damn if we don't have literal commies occupying posts of serious power in major US cities like this cuck DA... who are outwardly using Bolshevik style propaganda against their own citizens - an ominous sign.

Something has got to change my dudes.. and very quickly.

$oros and friends have been planning & funding this for decades.

We're only just now starting to see the gears of his evil machine truly starting to turn.

This Communist revolution has been plotted & prepped for close to a century at this point, and these Globalist One World Government types are happy to crash the global economy + sacrifice as many lives as it takes to usher in their long-term vision of global control.

These radical Leftist DAs and other local officials are just the front-lines in a worldwide battle to create a New World Order for the ages... And with the essentially unlimited funding of bloodline generational wealth backing them, (unfortunately) I wouldn't expect their full court press to let up anytime soon!

Hell they WANT to crash the ecomy because it's make people easier to take over if done right.

It’s a simpler explanation, they don’t believe in personal agency. They’ve completely perverted the reason why we try to get inside the heads of criminals, it’s so that we don’t inadvertently create more of them. However, they took it a step further and think that means criminals are only criminals because society created them, so how can you punish someone for something “we” did?

They don’t realize that it’s the choices those people made when confronted with those situations that’s the problem, it’s entirely their responsibility. The left blames society for it instead, so in their mind just letting the criminals go is the solution. That’s why nothing happens to Antifa either, since they’re “protesting” an “unjust society.”

You have to understand what motivates your opponents if you want to defeat them.

They're stealing the world.

Like some orwellian evil genius from Saturday morning cartoons. They're stealing every last ounce of value everywhere. You will own nothing and you will be happy. Or else.

They're actually stealing the world.

Our Superman got a cement truck full of kryptonite dumped on him. So he's laying low for now.

And my friends didn't think they were serious but by the actions of them, they were.

And now everyone, even my wife, are like "holy fuck, you've called it all"

I simply reply "we are at war, you put it all in that prism it all becomes predictable.

No Alex Jones shit, or alt sites, nothing. Just my own deductions.

I'll add to the proof by saying that not one of these people has stood up and proudly and overtly denounced communism or socialism in public. Not one. They hide it with their word salad as they always do by proclaiming every thing they do is in defense of "our democracy". What the hell is going on here?

yea you dont need to watch alex jones or anything to see it. i sharply remember the first obvious media propaganda toward communism at the time, that was sign enough

I'll never forget Chris Cuomo telling me it was illegal to read the wikileaks as I held an active security clearance.

that's when I dove in head first lol

Conservatives have been on a straight track for years. Progressives jumped the track, plowing through everything.

You haven’t been paying attention if you thought it was a short lived novelty. This is over a century in the making.

Injun here, I'm a bit more worried about soaring crime. Pretty sure every law abiding citizen regardless of race is concerned about becoming a victim of crime.

And if you live in a liberal hellhole you're also worried about the laws that prevent you from properly defending yourself should you become the victim of soaring crime.

I'm sure you know this, but liberals don't give a fuck about native Americans beyond a virtue signaling talking point and making sure they get enough liquor and casino licenses to maintain compliance. The Democrat Party as one of its first policies as a standalone party literally forced native Americans to reservations, and yet just like blacks, most of them vote for Democrats today. Just like the Democrats keep blacks on the societal plantation they keep Native Americans on the societal reservation.

trust me, I'm well aware of that myself. All you gotta do is go to any reservation, take a look around and not just go there for the casinos and you can see that shit everywhere. Then take a look at a few of the nations where they weren't federally recognized and put on reservations like the Lumbee in NC and you'll see what a community that had to rely on itself rather than the government was able to achieve a decent living compared to the reservations.

For real. The gun laws make it really hard for minorities to get guns. They claim ID is hard to get, but the right to bear arms is also in the Constitution.

Maj Toure has been a big advocate on this subject. Hope you are able to find a way out of the cities.

Thats some mighty nice land you got there chief. Could I interest you in some used blankets and a few bottles of whiskey for it?

funnier thing is I'm western band Cherokee, major nation that was forced on the trail of tears, so pretty applicable in my case lol

Careful, bud, or the Canadians will come down and burn down your Capitol again.

Maybe it's true that your grandfather was a Nazi who gave his children AND land up for a lie. I'd rather lose my land than lose my children. Yet God gives you his land and sacrifices his child for us.

I'm not sure what the fuck I just read but my grandfather was a scientist for NASA who happened to move here from Germany after the war.

Wait, she is a public figure, it should have to follow the same rules as GEOTUS had too.

Just read the Early life and education of the DA: https://en.m.wikipedia.org/wiki/Chesa_Boudin

His parents were literal commie terrorists sentenced for murder

And raised by good ole Bill Ayers and his fellow Commie cunt wife...

We are working our asses off to recall Boudin. It's funny, I've met many dems who voted for him only to become victims of unpunished crimes. They are eager to sign the petition

"Golden City"... must be referring to the amount of piss on the sidewalks.