TheDonald
Communities Topics Log In Sign Up
Sign In
Hot
All Posts
Settings
Win uses cookies, which are essential for the site to function. We don't want your data, nor do we share it with anyone. I accept.
DEFAULT COMMUNITIES • All General AskWin Funny Technology Animals Sports Gaming DIY Health Positive Privacy
2542 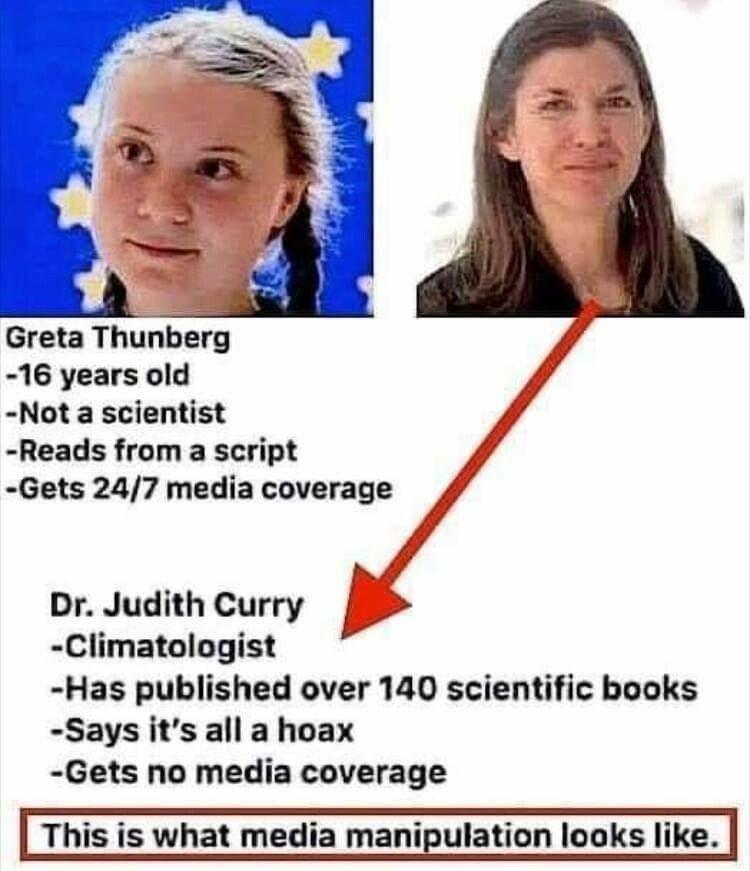 It not just in the media, but there is a mass amount of manipulation in science as well. Such things as publication bias. What is terrible about science is that most studies are funded by some group that has a reason to have the results be influenced in some way.

Yes. Scientists are dependent on funding and have shown that they will bypass integrity to get funding.

"Scientists", a.k.a. People. The idea that doing research makes someone immune to bias and compromise is just such ludicrous propaganda. Mengele was a doctor, so surely he only helped people. /s

Spot on. If anything these people lack integrity and should be constantly challenged.

I think you mean "State of Fear", also written by Crichton, and a severely underrated book.

I love State of Fear. I'm pretty sure a great deal of Crichton's books contain a warning, not against technology per say, but against science and scientists, especially ones that are bought and paid for.

State of Fear delves in to how the climate change crowd are running a racket. This is also the book that convinced me that while he is a liberal, he's not establishment.

Jurassic Park, Wu does in four years what should have taken twenty because of the money.

Prey, they play fast and loose with the nanites because they're under contract and need results.

Next, that one is kinda vague but I do remember the inciting incident is a scientist under pressure cutting corners.

In Micro, all the scientist cast get suckered in to going to Hawaii because of greed.

Man, this is making me want to reread all his books now.

Remember when State of Fear came out and how nuts the left went over it? I doubt any of them actually read it, but it certainly made them flip out. And Crichton was on point with it, especially the part about the media trying to keep us in a fear cycle in order to make sure the population doesn't revolt or see what they're doing.

Also, I was thinking of JP specifically because it goes into how biotech in general is becoming a business more than a science. The park shutting down was an act of corporate espionage, and dodgeson leads biosyn's development division but is more of a spook than a scientist.

This is why most scientific papers (especially real ones that try to hide that they are totally fake) will end with the "more studies are needed" statement. IE give us more money.

The whole Climategate scandal (that should have been the scandal of the century given how many billions it's costing us, not a passing blip) certainly proved that.

People are way too complacent.

Science is a business. Just like any other system where investment and profit are involved. To think it's some noble pursuit of the truth, where ever it leads, is a fantasy.

Maybe at the school level, but I don't see many kids debating their teachers like in the past. I did. I remember one professor I had said "Here comes the tea party", as he was standing outside of his room and I was walking in. He didn't like that I started pointing out that there were other ideas then the obviously bias stuff he was putting on his test. All of my college professors except a very few hated me for looking at things differently.

Your school sucked then. Only had one professor anything like that.

Nope. I’m a mean dick that won’t put up with being told what to do or think and always chose my schools accordingly.

This is sadly often true.

That way it’s less likely to be confused with the scientific method.

The corruption exists on every level. From beginning to end

It’s also, for media purposes, about what sells. This reflects our historically weird obsession with youth instead of the wisdom of elders.

Tgey don’t care about her published works, bc they get people to click on this cute kid… 🙃

And when you ask to debate the facts.....

The LEFT responds with silence.

The Jordan Peterson debates are great. The left just results to calling him a nazi.

And then you run into this conundrum:

Illogical commentary DOES NOT.

That is why I don't debate with people that are far leaning on both sides.
But more often being a bigot is almost a requirement to be on the left.

One thing the Leftist/Progressive can not withstand is having people joke at their political positions - due to their Motivations in 'drive for Power' - they will not promote a ridiculous position once the population begins to 'make fun of them.'

Ridicule is a powerful weapon here - and that is why MAGA MEMEs are so good....

At this point if you still believe the idiot-box you are part of the problem.

The left: “Let’s amplify and use a special needs kid to forward our CCP talking points. When challenged, we can accuse our opposition of hating children and those with special needs.” They know how to cull the ignorant amongst us, I’ll give them that

Do you guys think the elites are mocking us by touting "experts" who literally look like mentally challenged children? I never understood why anyone could look at this kid and take her seriously.

Didn’t notice it when a child that no one had heard of before was being fawned over by the media like christians talk about their saviors birth? “Greta is coming! Greta is coming! She is on a fancy boat! She’s here because of our sin!”

Science is meant to be challenged and tested. Today they want you to believe in things like “settled” science. Anytime I hear this absolutism I say run. Any real Scientist would be open to challenge and testing of theories.

They tried to use global warming to take away all our freedoms and destroy our economy. People weren't scared enough. They realized they needed dead bodies on the news and a virus spreading around the world. Magically it just appeared and peaked perfectly during the 2020 election. 2 birds with 1 stone.

Add “included in latest Disney here propaganda”. They included her in the beginning of the last Loki episode. It was subpar.

What a retarded little cunt

After 40+ years doing climate research, the reality check is that current climate change fears are....

Dr Curry is right but then she looks at real science and applies the laws if thermodynamics to evaluate the earth's climate system and....

There are so many reasons she is correct it would take a 40,000 word paper to describe them all. But I try too.

Published over 140 scientific books (not papers)? Hard to believe.

Also, she doesn't call it a hoax. I'm guessing it is 140 publications (books and peer reviewed articles)

Don't be so easily persuaded. She's still part of them she just disagrees on the finer details

Though she agreed that the Earth is warming, largely due to human-generated greenhouse gases such as carbon dioxide, and that the plausible worst-case scenario is potentially catastrophic, she asserted that the IPCC was distorting the science and scientists were not dealing adequately with uncertainties.

She's basically playing both sides in order to cash in. Sound familiar?

Add under Thunberg: "The poster child of the answer to anyone who asks: 'How can I tell if a kid has Fetal Alcohol Syndrome?'"

The commies can only make money off of lies.

If by media manipulation you mean communist propaganda, then you're correct

Curry is a lukewarmist, she would never call the hoax a hoax.

Willing to be gratefully surprised if you have a link.

And I think Judith Curry got fired.

I understand your point, but did Dr. Curry sail by herself in a boat. That is the determining factor in determining the validity of her work. /sarcasm

it's ok to stop posting about this child, and to stop watching wherever else you see her

My favorite Greta Fact is that she claims to be able to see CO2 with the naked eye. It's all detailed in her biography, which is unfortunately (conveniently) only available in Swedish.

State of Fear is a Michael Crichton book that will never be made into a movie.

It's the only fiction book I've ever read with an extensive bibliography.

He knew when he wrote it, it would cost him his Hollywood friends.

“But Judith is not a child that Joe can sniff and rape.”