TheDonald
Communities Topics Log In Sign Up
Sign In
Hot
All Posts
Settings
Win uses cookies, which are essential for the site to function. We don't want your data, nor do we share it with anyone. I accept.
DEFAULT COMMUNITIES • All General AskWin Funny Technology Animals Sports Gaming DIY Health Positive Privacy
3021 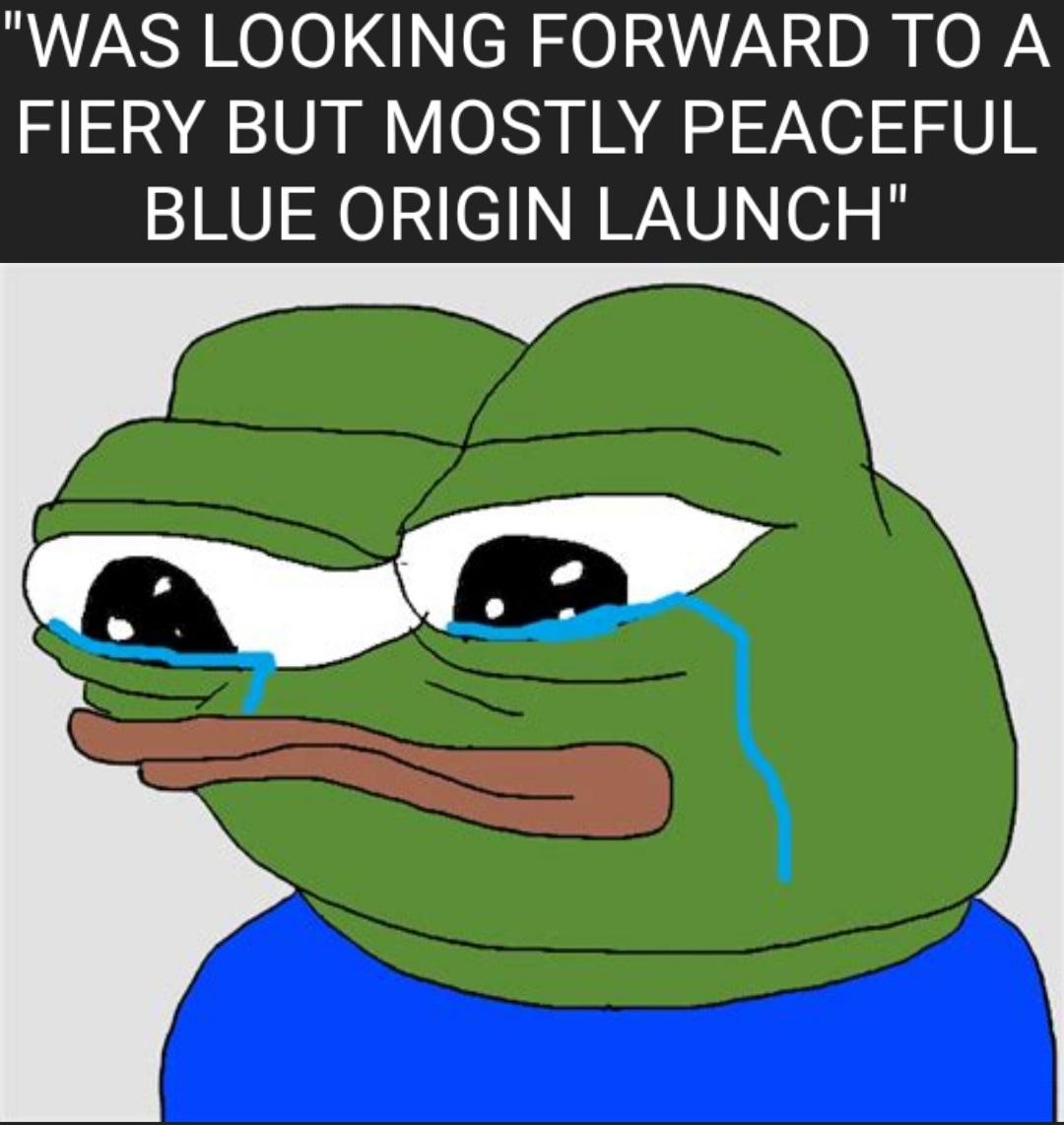 Small victories. Bezos could only get it up for 5 minutes.

Did he cross the Karman line? Did he make it to orbit?

If the answer to both questions aren't "yes", then no one should care because he's just a glorified hobbyist.

Did he make it to obit?

Nah it was a brief hop over the Karman line.

Virgin Galactic deserves far more attention than this pathetic PR stunt because Virgin Galactic's flight system will actually make getting to orbit feasible because having an aircraft that can lift the rocket plane above the densest part of the atmosphere makes getting to orbit SIGNIFICANTLY easier than trying to fly from ground.

Either way, SpaceX is still miles ahead of both of them, and I'm hoping Blue Origin shows us something to be proud of soon, or stops flying these space hops before they kill someone.

I've player Kerbal so I know what I'm talking about. Its not easier at all just a little more fuel efficient which means smaller rockets.

Then you should also know the delta V to get to 70km is much less than to get to orbit at 70km. It's easier to build a smaller rocket than a larger one that will (more than likely) need to stage. You should also know just how easy it is to turn a kerbal into cinder if you screw up your rentry (or incinerate your parachutes on launch).

I have yet to see Blue Origin attempt to tackle the larger deltaV requirements, so unless they do something more impressive than what the hobbyists can do with lobbing their rockers above the Karman line, Blue Origin is nothing more than a rich man's hobbyist project.

Yea they save a delta V at the expense of making things very complicated and usually way more expensive compared to the old capsule with parachutes method. And like you say space planes have a tendency to go up in smoke in the game and in RL. Capsule reentry is very simple. Just hit earth on an angle. You will smash into the atmo pretty hard but who cares its a capsule, it will be fine. Didn't Virgin already kill someone with their space plane? And yea I agree about Blue Origin. Going straight up then down is pretty lame.

Virgin Galactic killed someone because the reentry mode was enabled when it wasn't expected, and it caused a loss of control (possibly a break up, I don't recall which). The thing, though, is that Virgin Galactic took the data and went back to the drawing board so that the fatal failure shouldn't happen again - so they've shown they've got the engineering chops to do what they're doing. The niche I see Virgin Galactic filling is getting people up to an orbital resort as their launch platform is designed to do just that, and I wouldn't be surprised if they eventually became rated to dock and ferry passengers to and from the ISS.

Blue Origin on the other hand, is basically a fancy thrill ride atm... and I'm not going to stop looking down on them until they put something into orbit.

Wish he made it into an Obit… tuary. Kek.

Be bo bop I found a spam not.

Is Bezos just a shortened version of Beelzebub?

Isn't that a record?

Men with healthy erectile function don't have any reason to create evil empires.

It's okay pepe. It was all fake. There was no chance of failure.

Would be the biggest penis rocket in the white house since Big Mike moved out.

Barry sure could take a rocket to the moon.

Yesterday SpaceX had a fiery, peaceful and VERY noisy first test firing of the Super Heavy booster for the first time. What would NASA do without capitalism, free enterprise, and entrepreneurs ??

Well, under Obama, they didn't really do anything, so probably more of that.

I disagree!! Under Obama, NASA started this:

"A few weeks after killing the U.S.A.’s world-famous moon-mission program, President Obama has ordered the space agency that operates it to focus on reaching out to Muslim countries."

Lol, I never even knew about that.

> What could go wrong?

Bloat up on personnel with bureaucratic affirmative democrat-types?

Go on tv and bloviate?

Put their logo on Elon's stuff?

Give away major contracts to select stupid billionaire's inferior projects?

Then, for kickers, secretly collude with the world gov. people to eliminate all us commoners?

They are resourceful. There's lots of stuff they could do.

Most expensive carnival ride ever.

Best comment I saw was that people praising Bezos for this stunt is like oohing and ahhing over a driving a Model-T around the neighborhood. It's 52 years since the moon landing...and now we can send giant penis "near the edge of space", aka not-space

Dude, turn off Star Trek. California can't keep the lights on and our elite colleges are cranking out CRT indoctrinated retards, not next-gen engineers. China will militarize near-Earth orbit and Xiden and the Uniparty will be happy to make sure it happens. Hey, Chinese orbital supremacy gives the GOP a new fundraising angle and if the Uniparty can send plenty of tax dollars (and tasty grift) into the Military Industrial Tranny Complex.

Do you want to know what is really frustrating?

We could have dominated space in 2005 if we started to build the mass driver from L5 Society. It is literally the cheapest option we got, and we have the tech for it. It was designed in 1980's and early 1990's. $50 Billion for creating the infrastructure, power sources, capacitors(which if we take the modern ones today they are at least 3x more power than back then), and digging a deep hole. Each launch 1000 kg (we could launch a 1,300 kg one right now) in as little as 2 minutes(I would say 5 minutes so as to get things squared away at both ends). The launch speed being 11-13 Km/s which means each launch could cost at most $100k-$200k which is around $1k-$2k per Kg.

If Bezos really wanted to help in Space then doing this would be the best bet since by the time a rocket capable of lifting 100 tons to space there would already be around 120 tones in a 10 hour period of use. Now repeat that for several days while it would take around a month or longer to get at least 10 launches in a weeks time at best(likely a month really) In a given month the amount would total to 4k tons at minimum. If going by the 2 minute rule that number could be doubled if not tripled.

That is a delivery of parts, material, and using the pole itself as a truss or part of a system that they could use to build an orbital. We could have a space station 20x the ISS in a 5 year time span as an average, and that in a 3 year time span if being aggressive. That is all under $300 Billion to top it off.

Go with rockets only and the price would probably be around twice that number in cost, and at least 20-40 years in time. At this point if that was completed in 2005 then in 2020 we could have multiple orbitals with 1 at mars and 2 at the moon with the capability to make more in much less time than those 15 years. We could have seen double that number in 3 years from now with triple that number in 10 years.

Well, at least we all know what his genitals look like. 🤮

I think it is significant that Bezos and his cat were launched in a giant Big Boy shaped rocket.

Why couldn't the prick just stay in space?

Where's HAL when you need him?

no gonna lie, me too!

in 2021, a pod that floats down to the ground with parachutes is kinda lame, though! nasa has been doing that since the 60's!

how sad that this is all the tech billionaire could muster!?!

Q crowd said it was his suicide. WRONG.

Pepe, there now. We will have time for your dreams to come true. The sad part is the Dutch kid paid for the flight and did not even know it. I would ask for a refund.

This is the laugh I needed today at the end of a long day!!!

I was actually waiting for hackers to assume control and send the message:

That shits fake as covid.

Bezos is still on the planet?

He's a libshit and his company profited massively off of the government enforced lockdowns and "essential worker" bullshit while small businesses everywhere went bankrupt and closed up shop; thus ruining the lives of their families and the persons employed there.

A rich guy with ill-gained money paid for a seat in a rocket and went really high up.

He deserves no kudos.

Burning alive in a free fall would have been divine justice as long as no one else got hurt.

The company has banned several books by people they claim are radical while leaving things like the scum manifesto up: printed by Amazon

Has the most Orwellian spyware they keep pushing

Amazon prime has the second most degenerate original programming after Netflix

I'm sure I've missed a few

You clearly have a thing for rich bald men. Just come out of the closet already.

Using the word “collective” around here may get you labeled as a Marxist. /s