TheDonald
Communities Topics Log In Sign Up
Sign In
Hot
All Posts
Settings
Win uses cookies, which are essential for the site to function. We don't want your data, nor do we share it with anyone. I accept.
DEFAULT COMMUNITIES • All General AskWin Funny Technology Animals Sports Gaming DIY Health Positive Privacy
2870 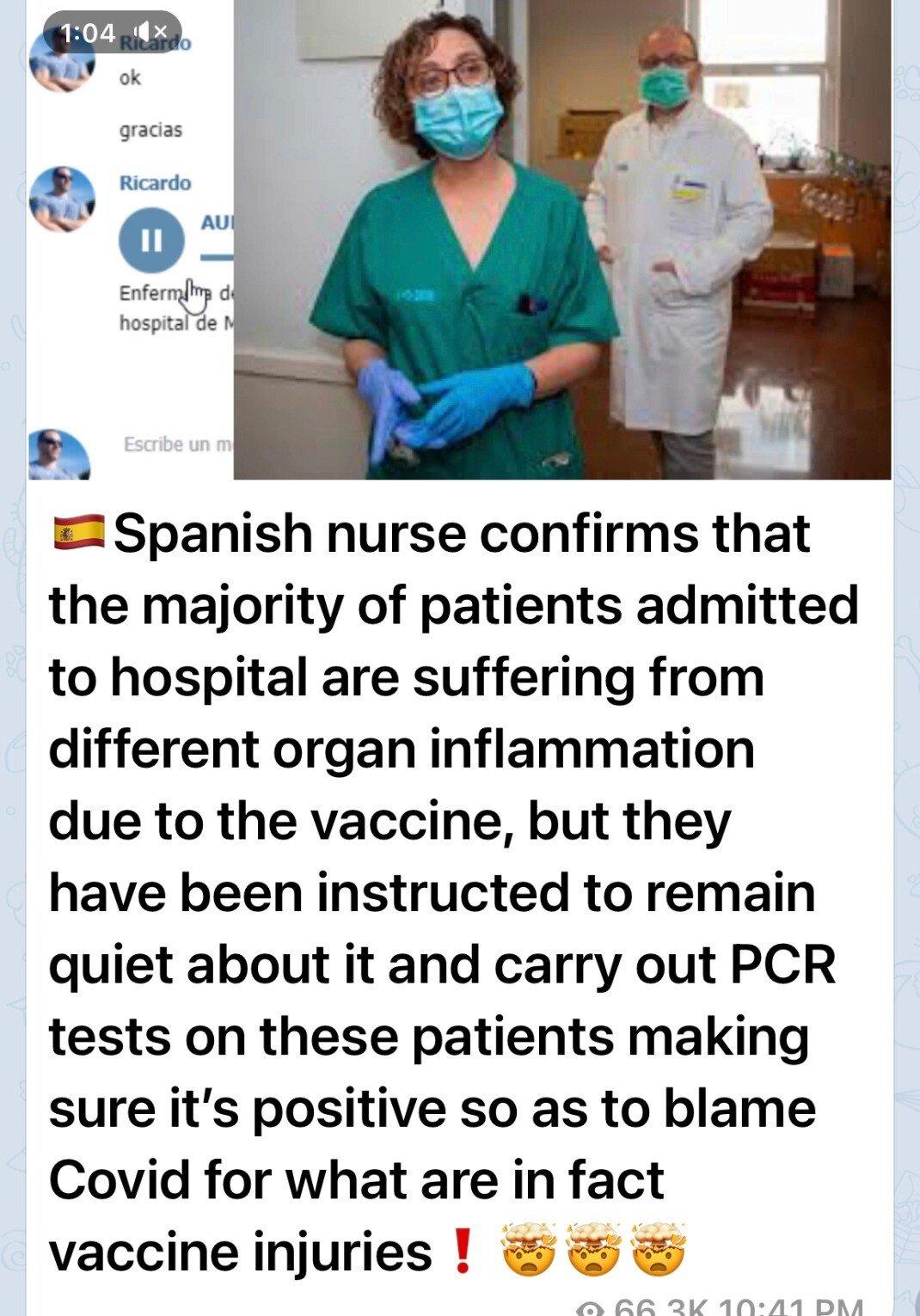 HER HOSPITAL THREATENED TO FIRE HER BECAUSE SHE DID THAT... because the Major Insurance player stated they would not allow for those treatments.... They wanted more sick people.... and they wanted to make sure HCQ and Ivermectin WERE NOT SPREAD AROUND THE MEDICAL COMMUNITY AS THE CURE....

I'm sure the hospital can cover the $3 for the treatment while billing the stay to insurance.

because the only account they care about is at the bank.

Thumbs through The Oresteia...

To the contrary I'm suggesting that in the absence of recognized and accepted systematic justice, a cycle of vendetta and vengeance will reign. On a more fundamental level, peaceful society rests on people using legal avenues to settle disputes and accepting the outcome. If people lose faith in this, they will turn to procuring justice by other means. A more modern story with similar (but perhaps more ambiguous) themes would be "Hang Em' High" with Clint Eastwood.

Is there any difference between nationalized healthcare and single payer healthcare when it comes to this kind of thing? That would be interesting.

Sounds like a great business opportunity if you can show that your hospital saved the highest % of people.

That video is censored now if you use messenger KEK.

That better than a peer reviewed study.

If you give hospitals extra funds or resources per covid cases, guess what?! You'll have fraudlent covid cases everywhere.

My covidtard family and friends don't even know that hospitals get more $ for covid patients.

my friend's uncle - guy I knew since I was a kid, last hold out in his family to get the gene therapy healthy guy - skinny dropped dead of a heart attack one month after he got the shot

That sucks as a hold out. You know he was bullied into it by the same people who are now in denial

Vermont liberals what do you expect.

Haitian president has entered the chat

No, he left the chat.

He won't get out alive

Haitian president has left the chat

when the cover up is greater than the crime category... Except in this case the crime is destroying people's health! The spike proteins are NO joke... They never leave the body and continuously inhibit blood flow until eventually heart failure. If this is misinformation SHOW me the study that it DOES Not... thank you.

Not trying to argue the substance of your claim, just that the formula of:

make wild claim with no evidence, demand evidence disproving claim as only acceptable refutation of claim

isn't how it works. Something isn't true simply because no one has proof it's false.

Ok, I lied. I am gonna argue substance real quick.

That's not how any of this works. The spike proteins are how your body identifies the virus. When your own cells are made to produce the protein, it triggers an autoimmune response and your body attacks itself.

Silly you! Misinformation just means they can't "debunk" it so they came up with another NPC talking point label for statements that go against the narrative.

Had we been allowed to live normal lives, built natural herd immunity, and treated this like the minimal issue it is, we could be over this by now.

Instead, we have the world’s governments tricking the foolish into poisoning themselves to keep the ruse going.

I suggest everyone watch the V for Vendetta movie (not graphic novel, this plot point is exclusive to the movie). The government makes a virus and over-inflates it’s danger in order to keep the population locked in their homes and docile so they can live their authoritarian dreams.

The TV series “Helix” has a similar plot. Create the disease and vaccine at the same time. Extra wrinkle, there were “immortals”who would survive everyone else, commissioning the project.

Alas, the disease escaped before the inoculation was ready, and mayhem ensued.

Yo I loved Helix. Sucks we never got to see it end v.v

The show "Heroes" had an episode with the exact same plot too. Fake cure to remove super powers gets approved by a fake president, but it's supposed to kill people instead and unite the country or something

Kill people with vaccines and then say it was Covid. Genius! Can't believe all the doctors and medical people just fall for this stuff. Come on man!

I keep repeating it everywhere and so are others. This delta variant bs is vaccinated people getting sick. It makes no sense that a cold-flu virus would be spreading in the middle of the hot summer months like they say it is. Not buying it.

And in the USA, Nurse was told not to record vaccine status of fully vaccinated patients admitted to hospital

Will she commit Arkancide or Clintoncide?

Interesting, they use the Astra Zenica there and it is junk. Where I live we know quite a few medical people and they are only seeing unvaccinated Covid patients in the hospital as the vaccinated are getting mild cases. These people all know about Ivermectin to prevent, but I don't think the hospitals are using it. I have an Ivermectin stash I got just in case. I got the Pfizer and have had mosquito bites worse, but I also have zero autoimmune issues and am old enough to be higher risk. I do not puch the vax on other people, especially the young.

Many if not physicians are using HCQ and ivermectin as a prophylactic in secret.

But they're not allowed to give it to YOU, the patient.

They are working hard to CURE COVID - and are not protecting Hospital or Insurance company CEOs or CFO's profits.

Yes, these folks are doing the Lord's work. But this should be a universal thing, your own doctor should be prescribing it.

I have an ivermectin stash, you can get it online

Yes, I've had horse ivermectin for years. Nuked my kids' lice with it and it never came back. I'm just saying doctors could have actually been prescribing it all this time if it weren't for the evil overlords.

Crime of the century. I am glad some regions rebelled and prescribed it so we have good data now.

There's so much wrong in this paragraph... especially in this thread...

I have literally witnessed this on a rather large scale. Affirmation that I'm not crazy is welcome. Hahaha

They attached it to a common flu virus.

They created a purported VAX to combat the spike protine they created, by injecting just the mRNA messenger that would manufacture a similar spike protine that is 97% similar to the one attached to the otherwise not serious C19 virus.

The rational thinking is that the VAX is so similar to the inflammatory portion of the virus the immune system would respond.

While it may in fact do that, the actual spike protine that was engineered to carry an auto-immunity (HIV) rider is in fact the deadly inflammatory portion of the viral package. So in essence people getting the VAX are introducing mainly the really bad part of the virus into themselves and since the VAX is riding with auto-immune suppression, the VAX is not being killed, and any further exposures to variants similar to the VAX and VIRUS are not being killed because the immune system is confused.

Ultimately it is my non-medical opinion based on the many studies out there that the VAX is extremely dangerous when compared to other common treatments and known prophylactics used in other typical respiratory flu cases. I knocked it out with an expectorant and heavy zink in about a week (was 67 yrs old then).

Blackrock and Vangard own the world. Hope Durham has the dirt on them and takes them out. They own electricity, water, food, technology, big pharma, central banks, governments, transportation on land and water and air.

Nobody is ever again going to blindly trust the medical profession after this, let alone scientists and muh 'experts'.

If this is true, phucking insanity!

It's so sad the West has lost all senses and now everything is corrupt. Banks, Government, Military, Science, Health and so much more.

Source please. If this is the source, it is lacking:

If the information surrounding COVID vaccines is manipulated/censored, then you as a patient are unable to give informed consent.