TheDonald
Communities Topics Log In Sign Up
Sign In
Hot
All Posts
Settings
Win uses cookies, which are essential for the site to function. We don't want your data, nor do we share it with anyone. I accept.
DEFAULT COMMUNITIES • All General AskWin Funny Technology Animals Sports Gaming DIY Health Positive Privacy
2696 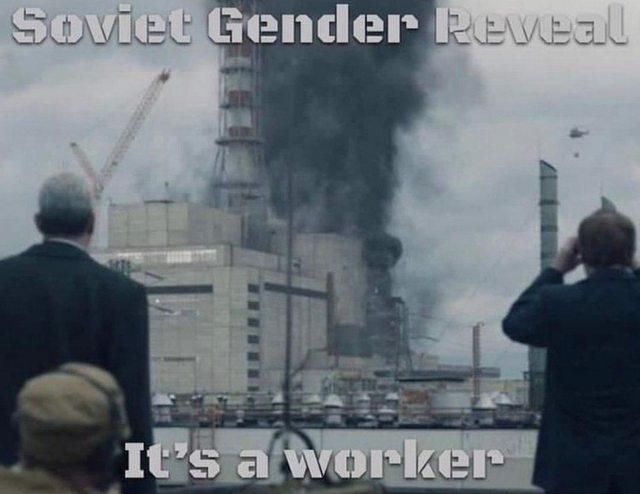 amazing series.... they got the tone absolutely perfect... the sound design transports you back in time and makes you feel like you're on another planet...

and i love how dirty it is.. most modern movies are "clean" . the frame doesn't look aged or lived in...

I was absolutely blown away by how good the HBO Chernobyl miniseries was. My brother gave it to my dad as a Christmas present, and then my dad let me borrow it so I could watch it. It may be possibly the best TV miniseries ever made.

There’s so many crazy intense moments it’s hard to pick a favourite.

The courtroom scene in finale where Legasov is describing the seconds leading up to the explosion.

Those guys clearing irradiated graphite off the roof with shovels.

The three guys trying to feel their way to the release valves in the pitch dark corridors.

General badass driving the truck up to the side of building #4 with the dosimeter.

HBO has pretty much churned out nonstop garbage ever since the Sopranos ended. But they aced this show.

The first 4 seasons of Game of Thrones were good (season 1 in particular was awesome), but once the story passed up where the books have gotten it started to really go downhill. The final 2 seasons sucked.

The Deadwood made-for-TV movie released a couple of years ago provided at least a somewhat satisfying ending to a show that should have gotten a proper final season.

Deadwood was cancelled for being too based.

Showing people how to muster and come together.

At the peak of its popularity, raking in thecash, shitcanned out of the blue.

Cancelled by a bunch of San Francisco Cocksuckers, to be sure. We should feed 'em to Wu's pigs

The good news is that there were never squads hunting down pets. There are dogs living in the Exclusion Zone to this day.

Um, no. That did happen and I read about it long before it was put on a TV series. They weren’t able to summarily execute ALL of the dogs for different reasons. Some survived and their lineage is still present in the zone today.

Why did they show that then?

It makes for compelling drama in the story. But it absolutely did not happen in real life.

Sadly it did. Maybe not on such a large scale, but they definitely went around killing and burying as many animals as they could find.

But it wasn’t done as HBO shows it. A young conscript who can barely load a rifle being told to go hunt puppies makes for good drama, but it’s not historically accurate. I should have been more clear that was my objection to that scene in terms of it not happening.

The liquidators on the roof, the engineers feeling their way through the corridors, and the general driving up to the reactor building all happened. The Legasov courtroom scene, while great storytelling, did not actually happen. The HBO series is great drama, but it is not historically accurate.

A few other things that were nonsense:

I also wish they had explained the actual cause of the explosion better. Everybody mentions "graphite tips" but the reason is never explained, and it just sounds like 'lol stupid Soviets'. The 'graphite tips' are better described as 'graphite ballast'. They were there for a reason.

The poor guy who was made to march up to the tower and look straight into the open core at gunpoint. Fuck. That was rough to me. It's like you already know you're dead. And the hospital scenes were so bad I had a hard time watching.

The three guys who had to go to the valves, two of them are still alive and one had a heart attack in 2005. So that was pretty miraculous.

The good news is that the scene where plant director Bryukhanov forces engineer Sitnikov to go and look into the reactor is pure fiction created to make the HBO series more dramatic. In reality, Sitnikov went to survey the damage on his own and did not look directly into the reactor pit.

The first season of Westworld was alright. Nothing of this caliber, naturally. (and let's pretend they stopped at season one)

You folks are making me want to watch it.

I had just assumed it would be tripe.

I will keep it in mind.

"The Assets" is an under-appreciated gem, to return the favor.

Curiously, I read somewhere that that series was the lowest rated series of all time... Weird, huh?

I guess a lifetime FBI agent in a senior position who was actually a dirty traitor is not news. Lol.

I will probably give it a chance at some point, but I have zero patience for anything that even remotely approaches anti-nuclear fearmongering.

It's less anti-nuclear, more anti communism and a criticism of corruption.

There's absolutely zero speak about being anti nuclear in the show

Just speaking about stopping the lies that get people killed

or how lies end up collapsing a civilization... very ... on the nose these days...

It was well done in terms of storytelling and cinematography, but sadly it gets the history very wrong. Academician Legasov, who the series presents as a hero standing for the truth against the Soviet system, was actually a devoted communist who repeated the Soviet government’s version of events. The series tag line “what is the cost of lies?” was never spoken by Legasov. Anatoly Dyatlov and Viktor Bryukhanov, the managers of the plant, are presented as the villains in this story but in reality were competent within the Soviet system in which they operated.

lol i dont go to hollywood for accurate history... i just want some decent story telling.. and they did with this series... lotta crap out there.. but sometimes you get a rose once in a while.

I really thought the portrayal of Dyatlov was some of the best acting in a long time. I don't think the real Dyatlov's competence was ever challenged; he was well-respected in the Soviet nuclear realm. He was just a stubborn asshole who was fully invested in the Soviet hierarchy of status. That's the part that Ritter channeled perfectly.

RIP Paul Ritter. He just died a couple months ago.

Absolutely. Paul Ritter’s performance was great in the series. It was extremely well acted.

And then they decided to erase almost a dozen other scientists and condense them down in to stronk wymyns scientist who never existed.

What film/series is it?

Chernobyl by HBO. It is a mini series about the Chernobyl Nuclear Disaster, from the disaster itself to the response to the disaster.

I recommend it. You might find some themes relevant today.

You mean like governments that value preserving the narrative and saving face above all else, including human life?

Didn’t recognize it from the picture! I absolutely loved the series.

I recognized it because the Corridor Crew guys did a bit on it a few days ago. They worked hard to make it look like the actual plant in Chernobyl and some of the filming was done at a nearly identical sister plant in a different country (with some modifications to the background etc).

It's not "totally inaccurate". It's like maybe 70% accurate, if you forgive some stuff just being for good storytelling.

Fun fact. China is having all kinds of nuclear reactor issues all over their country. And you don't hear anything at all about it in MSM. Not. One. Word. All praise glorious china.

Where are you getting this info?

Just got home and did some light research. Apparently, just last month, there was a leak (allegedly) in one of China's Nuclear Power Plants. China denied anything's wrong, but the French partners thought otherwise and contacted the United States to help with further investigations.

More info in this video by China Uncensored:

Flooding is raining down on China now and they are facing some some serious problems internally. The Mao wanna be is parading around in a facade. This will not stand.

Please do tell. I am interested in the details.

Kek, thanks for the triple sticky

Go for the Quattrofecta. 4 hits in one game is boss level

Soviet Gender reveal: it’s a “we”!

Black smoke, I guess the pope nominee wasn't enough of a globalist.

Not great, not terrible

EDIT: It’s a great meme, but all memes get the same rating in commie countries.

You must be sick. Get this man to the infirmary.

Nyet. Infirmary syuuka blyet. Give him hood and mask and shovel. Tell him this time he can look over the side.

Let the atom be a worker, not a soldier

I spent 2 minutes trying to kill that thing.

Hey make fun of soviets all you want, but even with all it's misery and suffering it was not as disgusting as current tranny infested child molesting west.

You mean it's a Communist China Gender reveal?

In Soviet Russia, reactor contaminates YOU.

This is funny, thanks Fren

Yeah, we need more of those in the USA and fewer welfare reveals.

So the Pope Died? or is that the election of a new Pope?

Chernobyl is an amazing show. Just watched it recently for the first time.

Screw HBO & their woke garbage though. I'm sorry guys but my family buys the streaming crap so we have HBO Max. I'm trying to at least convince them that we can share the streaming apps with people we trust like other family but we haven't done that yet. I want to give those woke liberal a-holes less of our money!

I just woke my wife with that laugh.

such a poorly made meme lol

Stoop creaming your jeans fags. The series was basically a fantasyland. Might as well be Game Of Thrones 1980.

You talk like a fag and your shits all retarded, so STFU.