TheDonald
Communities Topics Log In Sign Up
Sign In
Hot
All Posts
Settings
Win uses cookies, which are essential for the site to function. We don't want your data, nor do we share it with anyone. I accept.
DEFAULT COMMUNITIES • All General AskWin Funny Technology Animals Sports Gaming DIY Health Positive Privacy
3315 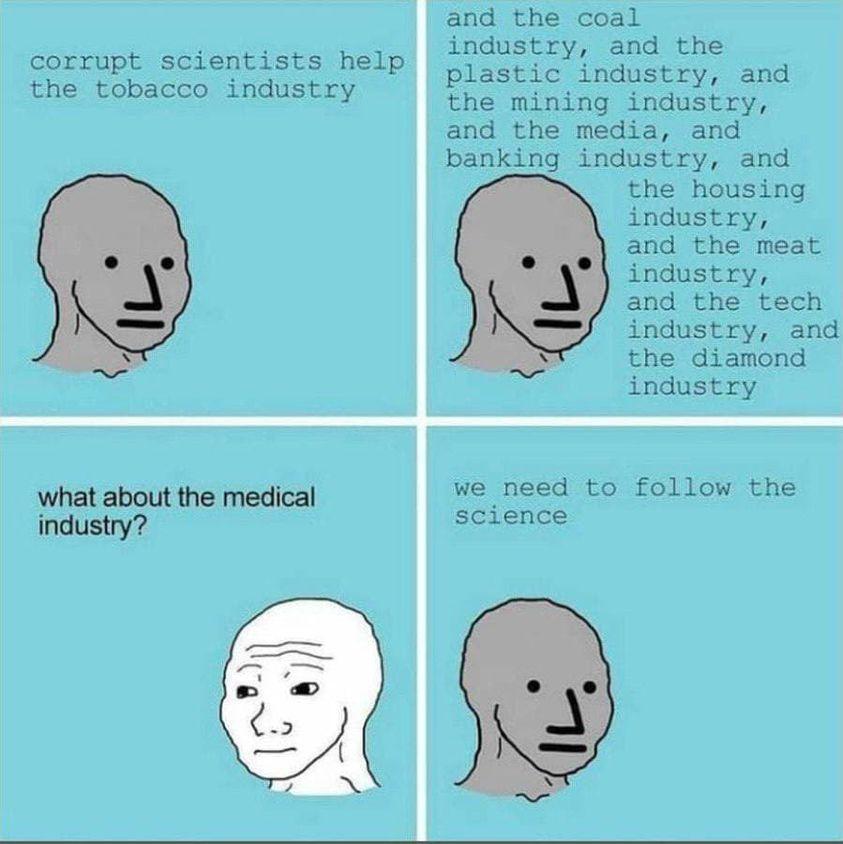 You are such a bigot.

It's Climate Chaos, you loser.

We need to stand opposed to racist clouds!!!!!

Clouds are white. That makes them racist.

Natural history shows us that natural rapid climate change is real. The dinosaurs where chilling for a lot longer on earth than we have been here, like 10 times as long. They had a few million years of history we only have 300k. Yet in one day the climate on all of earth went from fine to fire ball and killed almost everything. Liberals would say the dinosaurs did not do enough to stop the climate change.

Liberals would say the dinosaurs did not do enough to stop the climate change.

Imagine modern day leftists in the 1930s-1950s when doctors and scientists were saying that smoking was good for you. They would be shrieking and shouting down anyone who said smoking wasn't healthy saying "WHY DON'T YOU FOLLOW THE SCIENCE" and "WHY DON'T YOU BELIEVE IN SCIENCE! I TRUST SCIENCE!"

they demand you take a vaccine with horrific and high rates of side effects, and likely many long lasting effects that will be revealed in overall life expectancy, and yet raised the age to be able to make the dangerous decision to smoke or drink to 21... while also wanting to make 16 year olds able to vote. Even though a person can't be trusted to make a decision effecting their own body for another 5 years, they can totally be trusted to logically and intelligently make decisions on policies, people, and laws that will forever alter the world they live in... oh and they totally can be trusted down to the age of 2 or 3 to make decisions about vaccines, gender, fertility, etc. ZERO LOGIC unless your goal is authoritarian control, marxism and the death of freedom.

Oh and don't forget that if a doctor doesn't accept immediately that they're trans, then that doctor is wrong and shouldn't ask any questions or seek any other treatment than to lop off bits, cause you don't need gendre disphoria anymore to be a trans, except they also use it as a defense of why we have to "treat" two year olds.

Sorry... Ma'am, you have testicular cancer.

Do you want to shave your balls before chemotherapy or let the hair naturally fall out?

That always brings me back to the king's speech. Anybody who has seen it will undoubtedly know the scene that I'm talking about.

No science in the 1930s suggested smoking was good for you.

Wrong. There were many physicians/scientists who were saying smoking was good for you.

You are completely missing the point. The point being, that leftists are taking the words of scientists with an agenda and then repeat it as "the science has spoken" and "trust science."

For example, anyone who doesn't completely trust the experimental COVID vaccine as safe is now a "science denier" and "doesn't believe in science"

Science is a system via observation and experiment. But people are instead taking the words of scientists, most of them with a political agenda or special interest, and then proclaiming it as "the science has spoken"

My point being, those same people would be the ones to immediately trust the physicians in the 1930s who were appearing in advertisements telling people that smoking is healthy and good for you. Its an fallacy with people instantly and automatically believing any type of "authority figure" without question.

For example, anyone who doesn't completely trust the experimental COVID vaccine as safe is now a "science denier" and "doesn't believe in science"

There is an unfortunate amount of overlap between those who don't trust the fake COVID vaccine, and those who don't trust all vaccines period and are truly anti-science (still quite common in Evangelical circles). So even if you're a pro-science person who is expressing distrust of the covid vaccine, you automatically get lumped in with the "science is evil" crowd. I hate it.

Should look at some of the things during the Victorian age too! Apparently they put Borax into milk in order to make it more palletable even after it spoiled. Did nothing to the bacteria.

Heck the spanish flu they just mixed abunch of vaccines together and injected people with them in hopes that it would kill the virus.

Mass vaccinations were the cause of the spanish flu. That’s why Greece had no breakout and they were also the only country to refuse the vaccines

Are there any scientists in the world advising any other world governments who have a different opinion?

Nicotine is one of the best adhd drugs ever found. Minimal side effects. Both world wars were won with caffeine and nicotine.

I need a bigger SD card with all these rounds you folks keep giving me to send to the few leftists that think they can convince me to get the poke.

I find it impossible to communicate with the left. A fools errand

The genius of corrupt medical science and corrupt climate science is its promoters can override logical criticisms with fake moral accusations.

If you disagree with corrupt medical science, you're responsible for the deaths of grandmas.

If you disagree with corrupt climate science, you're murdering polar bears and stealing the childhood of a rich little girl with braids.

Science said the vax would stop all COVID variants including the Delta. Three weeks later, Science says vax can't stop the Delta, time to mask up. Not sure which Science to follow?

The science of they never want this bullshit to end, and drag it out for as long as possible.

You're just repeating the same word.

i think you got it confused with yo mama!

yeah, its one of the big reasons for the pushing of chemical casteration and hormone pills.

As much as I enjoyed this meme, but are reposts really getting sticked nowadays?

Yeah, this doesn't deserve to be sticky

I haven’t been on much lately and this is the first I’ve seen it. Stickies help us casual pedes

I think this is the 3rd or 4th time I've seen this meme. I mean...I enjoyed it the first time but c'mon, our meme warriors are better than this.

The medical institution has a lot of trust among the people because the people interact with it personally. That's all it really comes down to. Whatever the liberal see as a trustworthy institution, they infiltrate and destroy it, that's probably the worst thing about the left.

its short circuits their wiring...

It's shocking how the medical community has embraced this depop shot and the whole narrative. They really need to stop watching cnn.

I've understood that doctors were fucking morons for a decade

It was pretty much agreed back during Darwin's time that blacks were subhumans. They were considered a lesser evolved species of homo erectus.

Fats are what make you fat!!! Follow the science BIGOT

nice flair. but also wtf 5h 46 comments. did a bunch of people lose access to this site?!

Recycled memes. Pedes dont have time for that. They have families and businesses

nice! if it just mentioned tobacco industry it would have been more effective for me. We've all had to go down the rabbit hole that second hand smoke kills because science. And court cases have stopped us all from being anywhere near a building while smoking, etc.

no no no see you don't understand, medical professionals swore an oath!! There's no way they would like to their fellow human being for profit!!!!!1

This also reminds me of that stupid little faggot that got in an argument with Steven Crowder, that H3 Klein jackass: "I don't need to think for myself, just listen to the CDC bro"

What about the science industry?

Science has for a long time been compromised. Scientists have to stick to the dogma and not challenge it.

Yep, it's always a strange day when someone finds out everybody's dirty in one way or another at one time or another and then realizes some people are actually good at it and have made it their profession.

I love the npc flair😂😂

This flair is my new favorite.

What about the environmental industry

Like everything it is a mix of science and BS. Many factories of the early to mid 20th century simply dumped into sea, rivers and lands, and created disasters. Today, there is still room to improve on some things. There is also hype and propaganda.

Nice try, you almost had me. But "the media" is arguably wrong.

You seem to have attracted several shills and I think even bots (or stupid shills). Quality meme.

ironically, canada put it best back in the late 90s.

How the hell do you guys add thos flairs?

Saw the wall of text. Closed the image.