TheDonald
Communities Topics Log In Sign Up
Sign In
Hot
All Posts
Settings
Win uses cookies, which are essential for the site to function. We don't want your data, nor do we share it with anyone. I accept.
DEFAULT COMMUNITIES • All General AskWin Funny Technology Animals Sports Gaming DIY Health Positive Privacy
2606 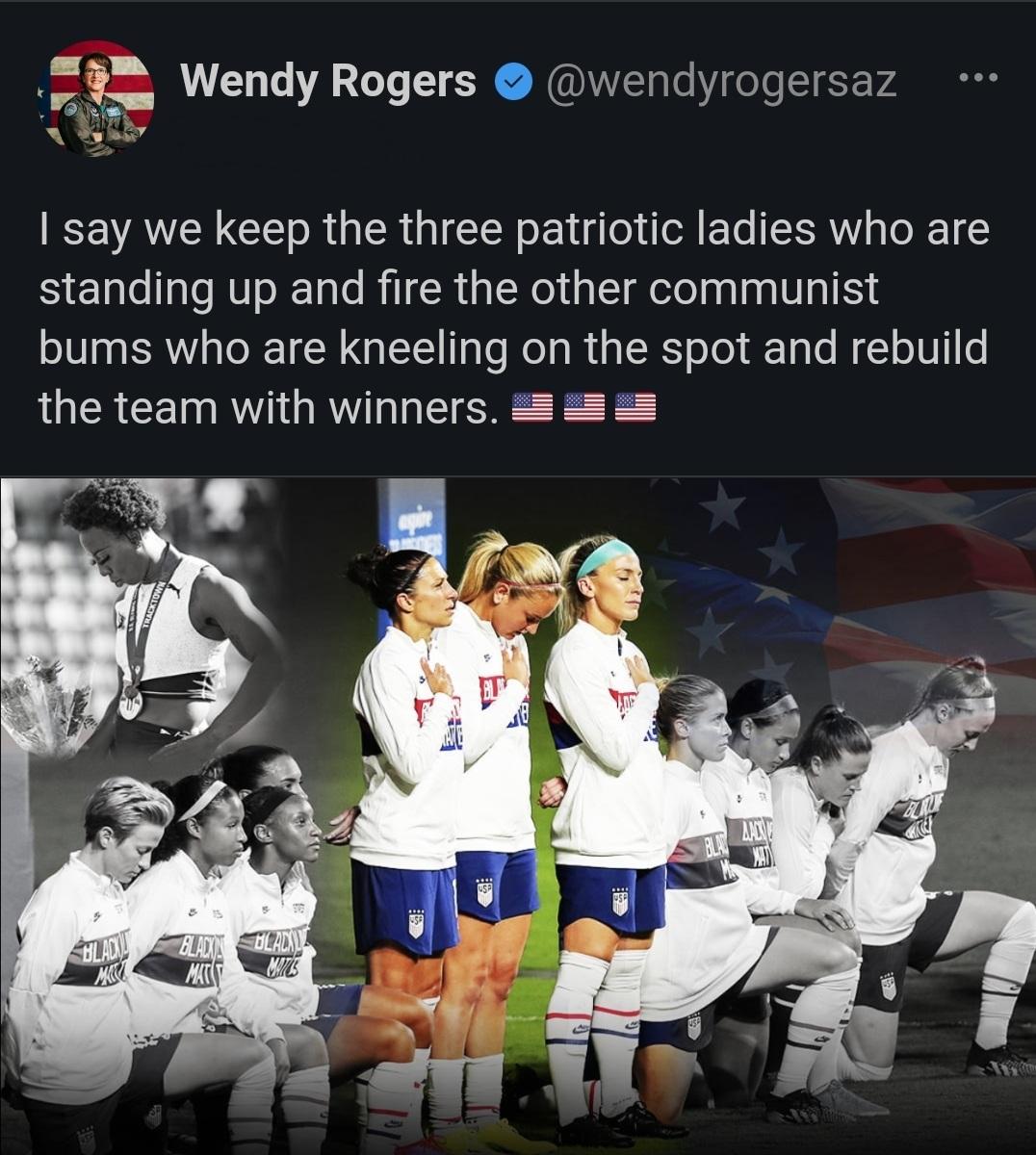 The uniforms say black lives matter across the front? What the fuck is wrong with people? Send these women to south Chiraq on a weekend and they can help "black lives."

Yes, what absolute bullshit. And you can bet BLM didn't spend a dime of its billions to make those shirts. Free advertising

The shirts are only a start. If they want to put BLM on their shirts instead of USA, as far as I'm concerned, they're the BLM team. Team USA needs to stop paying these shitheads and they can collect a check from BLM.

I thought they weren't allowed to wear that crap during the games. I must have been mistaken.

I thought they weren't allowed to do a lot of things - but here we are.

That is better. Still ridiculous though.

Wow I didn’t notice that. Wtf.

yes. They should have been disqualified for political extremism. Come on Japan.

I feel bad for the patriotic athletes who trained for years for their chance to participate in the Olympics, only to be overshadowed by athletes who were likely paid off by activist groups to kneel during the anthem.

The Olympics have always been about NATIONS competing and the best individuals striving to win for their countries -- but this generation of talentless hacks think they are important before they even accomplish a damn thing and could care a less about the fact that they're supposed to be supporting their country, not pissing on them -- there's plenty of OTHER time for them to do that on their own -- but they lack that disciplines because they are so self-absorbed

These three probably worked hardest, really cared to win. The others I doubt are here for any other reason than to gain attention and hope for an alternate easy ride.

Winners don't care about current events or politics. They were born and raised to win as a priority. These three girls are winners.

She's been bringing the heat lately. If I remember, she came out the blocks kinda slow.

I've paid zero attention to the wokelympics, but WTF are they all wearing BLM jerseys?

Did they have a choice? Most likely voted on by the rest of the team.

Then they should have stood against it and taken them off. And while they're at it, they should take all their clothes off. I mean, why not?

All of them have BLM on their shirts.

I feel like the people who kneel are also throwing the games. I can't wait until the patriotic competitors speak out about it

How the hell are you supposed to work well together when more than half of your team hates themselves and their country?

oh yeah because they're all fake

They all knelt. This is a picture from a friendly a few months ago. All the commie cunts knelt before the kickoff against Sweden in their opening match of the Olympics. Also, all 23 players for Sweden knelt, as well....so don’t celebrate those retarded cunts, either. Still glad to see the US get their asses handed to them!

How great that the Trump curse hit ---- after 44 wins they lost game 45!!!!! I'd like to say welcome home ladies job well done, but can't!!! Perhaps you can look at yourselves and try to figure out who the team is that was supposed to win the gold, lost to the 5th place team. They are winners inside and out! And loved their COUNTRY! You ??????? A picture of losers!!!! Inside and out!

The Swedes also kneeled before the game.

Fact check true: <sad Pepe> The whole world is on its knees.

TOKYO (AP) — The referee’s whistle blew, the British players glanced at one another and they dropped to their knees. Their Chilean counterparts responded in kind, all taking a knee at the Sapporo Dome.

An hour later, it was the American and Swedish players in Tokyo taking part Wednesday in united, unprecedented gestures against racism by teams at an Olympics.

You can tell just by their posture that the kneelers are ashamed of themselves deep down.

I thought they weren’t gonna allow kneeling or benching during the anthem?

Late night shorthand for sitting on the bench or the side.

that would require caring about women’s soccer

I would rather have a losing team that gave it their all and stood for our flag. But I think they lost anyway.

It’s almost like a team that’s not United as one cohesive unit is susceptible to losing.

Olympics haven’t started in Tokyo yet

Yeah, they have. The US Women’s Team lost their opening match against Sweden in which the commie cunts all knelt prior to kickoff....including all the retarded cunts for Sweden.

As for the protesting, I don’t know what’s up. I know Tokyo said fuck that shit, but apparently the US Olympic Committee has said they are giving the athletes “space” to do what they want. FUCKING COMMIES.

Is it just me or is the problem with the US, Women, and Minorities ?

There is a lot of black women that want white dudes in concentration camps.

Literally cheering on any team against these traitors!

China vs USA. What would you choose? Curious.

You can’t play vs yourself in sports

How in the fuck can they even play on the same team.

What a bunch racists.

These kids today, I'll tell ya.

This isn’t a picture from before the Sweden game. This picture is from a couple months ago where US National Team veteran Carli Lloyd and a couple others stood while the rest knelt. I wasn’t proud (because WHO THE FUCK KNEELS), but I was happy to see Lloyd stand. Lloyd’s gotta be the oldest on the team and hopefully isn’t part of this younger woke crowd, or so I had hoped. Also, she’s a lesbian, so I was I hoping she was one of those TERF dikes. But alas, she along with all the other 22 communist cunts took a fucking knee before the game.

Also, don’t celebrate Sweden, all those retarded cunts took a knee, as well, prior to the kickoff.

Serious question for any of our lady pedes on here — Why are women so fucking retarded....so god damn naive and easily brainwashed? Thanks!

Remember how awesome it was to see Michael Phelps destroy everyone in the Olympics back in 2008?

I say we find that U15 boys team that kicked their asses and have them all identify as women. They'd take gold and show everyone how much a joke "men and women are the same" is.

As an American I actively root for the other team as long as we have these pieces of anti-American shit on the team. Absolute disgrace, turning our country into a side show attraction.

How the hell can she call these "Patriotic Leaders" while wearing BLM outfits? So we rebuild the team with BLM winners? What real patriot would wear one of these?

I'd rather lose with dignity than win with disgrace. As far as I'm concerned, when you represent the United States you stand for the flag.

Ideally, every American should represent the US properly, but at least our national team players should.

Burn it down. Burn it all down. I'm done with it.

Who designed the uniforms this year?

Nike as always, at least since ‘96 for the US Men’s and Women’s soccer teams.

Who cares about women's soccer?

I mean what are they protesting? The Biden administration?

The three standing up are still wearing BLM CCP shirts. Fire them all!!!

I am not watching the Olympics or any other sports for several years now. Can someone verify? They are wearing BLM pullovers? Really?

Get rid of them too. They are wearing Marxist propaganda on their jackets

Congratulations, ladies. You will be forgotten. Tomorrow.

I guess the guards in the Olympics went for Communism! Our country is dying down today, but its body is still kicking!

Hard to win anything playing on your knees. Ask NBA