TheDonald
Communities Topics Log In Sign Up
Sign In
Hot
All Posts
Settings
Win uses cookies, which are essential for the site to function. We don't want your data, nor do we share it with anyone. I accept.
DEFAULT COMMUNITIES • All General AskWin Funny Technology Animals Sports Gaming DIY Health Positive Privacy
1174 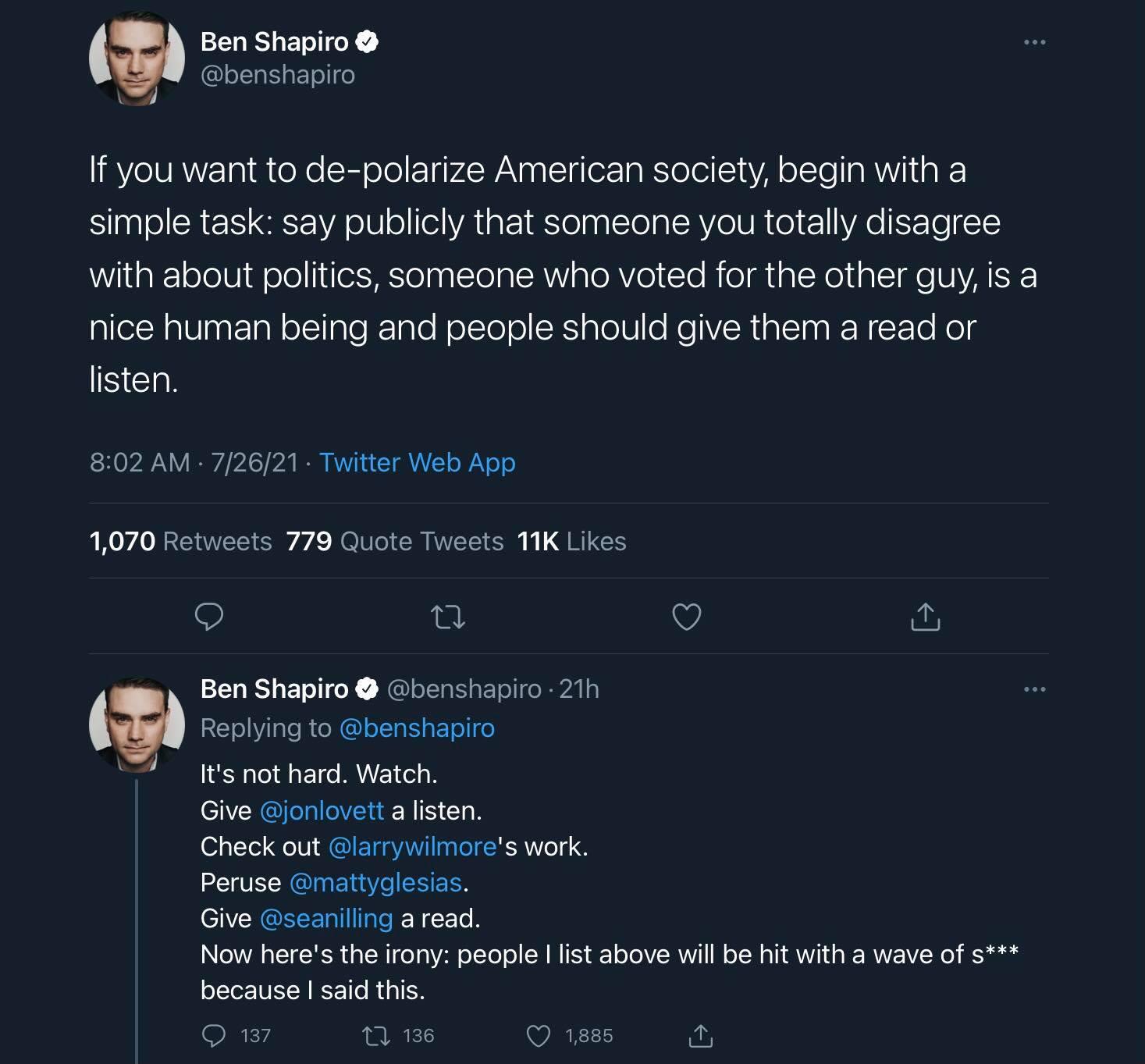 DO NOT BUY HIS NEW BOOK. BUY MARK LEVIN'S BOOK INSTEAD.

I can’t believe my brother eats up this Shapiro shit. I will get him off this cuck ASAP

But his wife is a doctor!

I have leftist friends, I can only pity them. Hating them is silly.

i have zero leftist friends !

Yea just like he is giving Ben and Jerry's a listen. He is a joke.

He's always there to undermine our side. Always willing to "fight" when it puts money in his pocket. Yet never fails to spread the message of the enemy if things get too real. It's as if he profits from riling up conservatives enough to take their money but not enough to actually accomplish something.

Shapiro has done nothing for the USA. Fucking cuck.

Edit: I wonder if he will tweet a similar message to the Israeli pm telling Israel to listen to hamas and other anti-Israel info?

He wrote a hilariously bad Tom Clancy knock off book.

It has everything from a Detroit pimp who kills black kids and blames it on cops, a female latina governor of Texas that is basically a brown Sarah Palin

And a 6 foot 5 former spec ops guy who is the main character.

It's the funniest thing I ever read it has terrible writing.

Ben forced his staff to stop talking about The Steal when orders came down from the Neocon/Uniparty elites just a couple days after the election. He's just another neocon grifting off the Red vs Blue fake narrative.

He never gets banned from any platforms and is heavily pushed by YT algo - he is the Hulk Hogan character for the right.

Nah, Ben Shapiro can fuck right off with that noise. Webgave the better part of a year to pilitical and social opposition supposedly to the best interest of our Nation only to have it detrimentally decimate our working population inbterms of health, small business, life, and liberty, so determined by allegedly "nice human beings" with our best interests in mind. Ben Shapiro may be a big mouth with a big platform, but that doesn't make him a moral authority, or any kind of authority at all, it just makes him a loudmouth with a large platform catering to whichever way the wind blows.

But his wife is a doctor!

Well Ben's people are the ones behind all the bullshit so he's gotta run cover.

Ben is a Democrat

I would call him a left centralist. I do think he has some liberal (in the classical sense) leanings but yeah he's a coastal jew lawyer you really expect him to disagree with the 9/10ths of jews who are democrat?

Why does anyone waste their time with this cuck? Don't listen, there are plenty of other people to listen to besides this person who is on the same level as Tim Pool, another cuck.

I rather listen to Tim Pool.

Clever boi, irrelevant boi, out of touch boi. Depolarization starts with full forensic audits of all the states. If that is not in the conversation, we are at war.

Less than 2% of the American population, nearly 50% of the authors and professors. Divest yourself from Zionist thought. Like it or not, America will have to answer the JQ.

They always seem to side with evil.

Yup, Shapiro is one of those so called 'conservatives' that is constantly inciting justifiable fury, yet then concludes that absolutely nothing should actually be done about any of it. Just be obedient automatons and watch his "Ben Shapiro CRUSHES...." videos as the country implodes. (and never mind the fact that you'll spend 5 minutes listening to him hock everything under the sun, and 2 mins of actual punditry)

Basically his stance is, "Make me rich as the country is destroyed gang"

You are wrong. The people we need to reach out to the most are the ones we don't agree with. Frankly, leftists aren't far from becoming America First patriots, they just have an alternative set of social issues they believe need looked at. Leftists might be brainwashed in many ways but not everything we believe in is true, we all need to look inward. Leftists and their resentment of corrupted leadership is warranted and they saw it far before a majority of conservatives did. Without Trump conservatives would still be completely disillusioned by the original old guards brainwashing that began after WWII.

Darren Beattie gave a speech in 2016, which the people you are reaching out to as reasonable had him labelled as a white supreme for and that's why he left the WH. I just read it, recently, and interestingly enough, he's talking about the fusionism of 1980s Republican voting, peaking with Reagan's election. The coaltion of christian convervatives, war hawks and economic libertarians. He believes it worked until the end of the cold war and explains further and why there has been this collapse and conflict... I think he's definitely barking up the right tree, because you can see it very clearly with the RINOs and MAGA.

I recommend the read, it's a transcript of the speech.

they just have an alternative set of social issues they believe need looked at.

While he was selling or country out to China. You need to learn to looking past the surface because you're still quite blue pilled

Nah, when you are losing your job and people are cheering it while telling you you're the devil for being alive. I think I'll stick with calling them a domestic enemy.

PS: After the civil war the "Respect" waned as the losers were made to work as slaves themselves in sharecrops and their money declared worthless, conveniently forcing everyone who didn't manage to keep their own property into servitude. How's that for respect between combatants? Especially since EVERY LAST ONE of the participants in the war on both sides weren't even in the slave owning ruling class of wealthy top earners.

They never should have fired on Fort Sumter.

Did you forget about his murderous attorney general? Or all the jobs he shipped overseas?

The jobs shipping overseas started with Nixon and reached full gear with Reagan -- budget deficits tend to cause trade imbalances, as does going off of the gold standard.

As for Reno and Waco, it was a despicable act, but it really did not matter in the big picture. Sickening and evil, but not really important except emotionally.

The point I wish to emphasize is that it was not Clinton himself that was responsible for his administration's prosperity, but rather that his willingness to cooperate with Newts Contract with America Republicans that led to prosperity.

His entire existence is to befriend the right and coerce them into being liberals.

That's the purpose of him linking liberal accounts. You are being conditioned.

Virtually All "right media" isn't right media at all. It liberal propaganda designed for the right.

Yes, those are all people who are way more reasonable than the typical lefty. Like Bill Maher. But they've also said some truly heinous shit, and are still generally fucking morons

Delegating your authority to those who wish you dead is possibly the dumbest move I've seen controlled opposition make.

Ben isn't going to be remembered by us. He is just an abrasive man with advertisers and connections.

No, these criminal stole my personal property, and for this I must take from you!

this is why we lose. we're in a fight where the left is punching us in the nuts, biting us, gouging our eyes out. whereas the right doesnt even know we're in a fight, so they think talking it out is still the only option.

Tell someone you totally disagree with that they are nice human beings?

Secondly, does Ben have a tweet recommending some people listen to Alex Jones and call him a nice person? Or Ron Paul? Or Mark Dice? Or Mike Cernovich? Or any number of other voices who Ben is polarized against?

How come when it's "we gotta come together!", It's everybody needing to go meet on the Marxist's territory, never the Marxists having to move over to where we are?

does he not remember when Antifa shot a dude for wearing a MAGA hat in Portland, and then BLM that night cheered about the guy being dead........

I'm supposed to say they're nice human beings after they did 2b worth of damage and stopped counting how much damage in June of 2020....... over a year has gone past since their last count of damages and they continue to do damage.

Over the last few years I started to really dislike him. The original anti-woke movement he helped grow has clearly outgrown him.

It's not my responsibility to build that bridge, Benji. I've been standing on it my entire adult life. The left, in its increasing rage and derangement, burned that bridge down. I moved two steps to the right in order to get off of that burning bridge. They moved fifty steps to the left and left it smoldering. Fuck them.

I don't understand how anyone listened to and enjoyed this weasel from the get go. He has one of those still going through puberty voices and I can't stand it.

love your enemies anyone?

How do you compromise with someone who wants to expose themselves to minors?

Ben's loyalty lies with Israel, not the US.

I've made a habit of that behavior, and all I got was a lockdown and a mask requirement that made no scientific sense, whatsoever.

Milo was right all along

A side that not only raped kids, but is push so damn hard to normalize it that we have to accept it are not good people.

Ben's just playing the noble conservative loser eternally kvetching. He's just in it for the sheckles. Greatest ally, he ain't.

Ben was the type of kid in grade school, that when someone picked a fist fight with him, he would throw a Pokémon card down and attack him with that.

And yet nobody on the other side ever does the same for us. You cannot have a civil society if one party chooses not to be civil.

Crossing the aisle to be friendly with those who hate you and everything America stands for doesn't make you a peacemaker. It makes you a chump.

Anyone else notice that he says nothing about people who are to the right of his opinion? Shapiro is Israel first. Don't believe otherwise.

This wannabe intellectual is among the most annoying voices who says nothing.

Only thing I like about this guy is his sister's khazar milkers.

But at least I thought they were nice human beings