TheDonald
Communities Topics Log In Sign Up
Sign In
Hot
All Posts
Settings
Win uses cookies, which are essential for the site to function. We don't want your data, nor do we share it with anyone. I accept.
DEFAULT COMMUNITIES • All General AskWin Funny Technology Animals Sports Gaming DIY Health Positive Privacy
4520 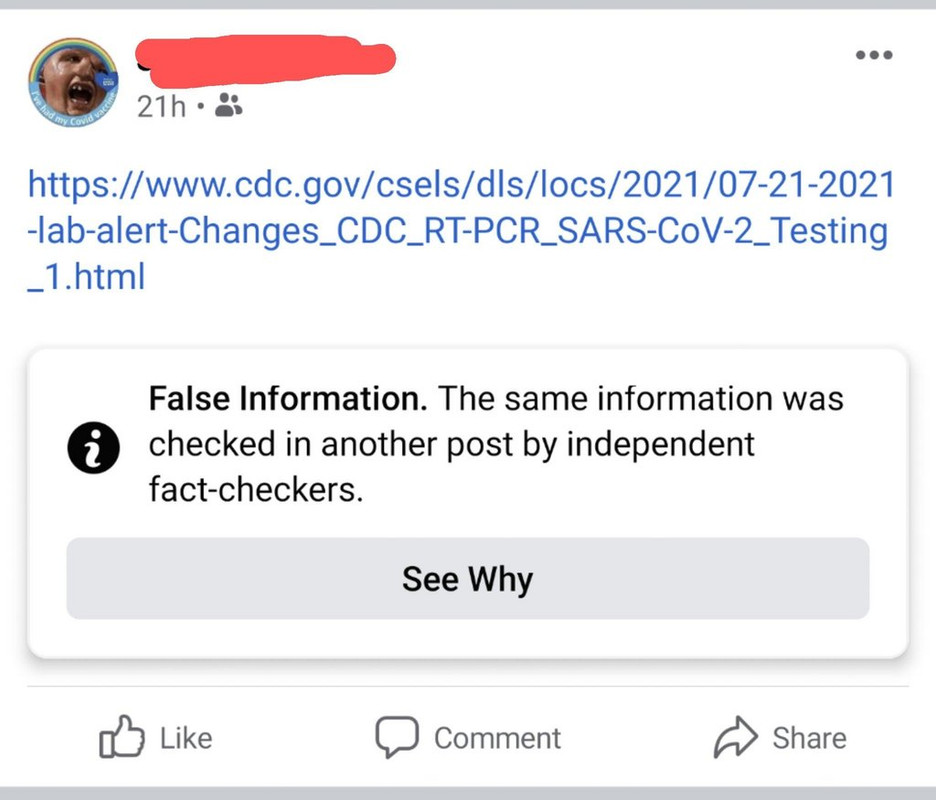 Keep that as ammunition against Facebook and "fact checkers"

To be fair, the cdc is largely bullshit.

I'd still rank them above Fakebook, at least they are publishing information and not censoring it.

One of the founders spent some of their funding on hookers, possibly at a Holiday Inn Express.

I hope you're just being sarcastic, as every single person who works at snopes has absolutely zero credentials. The founders are real whackos too, their personal life is/was totally bizarre. Drugs, prostitutes, embezzling, etc.

I’ll wait for r/politics statement just to be sure

CDC has just as many conflicts of interest as cuckbook. Both censor and disseminate false information for private gain.

the cdc is largely bullshit

How many vaccine patents does the CDC own?

Was thinking the same thing. Is Facebook #ourguy for fighting the CDC?? Nah just kidding, to hell with ‘em both.

some 23 year old with a nose ring, ear plugs, skinny jeans, and full sleeve tattoos who microdoses censors the CDC or Front Line Doctors with more medical experience than he has been alive.

If someone takes a fact and censors it / throws it out .. They're a 'Fact-Chucker'

They already have been proven to be fake per the result of Candace Owen’s lawsuit. The Federal Court judge threw out her case because “No reasonable person believes Facebook “fact checkers” actually have any factual implication”.

Viva Frei and Robert Barnes Break it Down- Source-

As it was explained by Barnes and Viva Frei, the judge was attempting to do Facebook a favor money wise by throwing this out.

Just thought of this now, I’ll check after work but if anyone can find that phrase in actual court documents and turn it into a meme, that would be a fucking golden killshot. Fact-checkers fact checking the judge saying they aren’t real news? If they declare they are actually news, then wouldn’t they not be protected from Candace Owens refilling that lawsuit citing their own words disagreeing with the judge in an appeal? Or anyone else’s lawsuit for that matter? If they don’t fact check it, they acknowledge that they aren’t legitimate. Which one do you think they’ll choose? Win, win either way.

First find proof Biden trusting the Face Book fact checkers Then appeal to the Same Judge with that proof and this question. Then you are officially going on record calling President Biden an unreasonable person. Let him choose, protect facebook, or protect Biden.

No reasonable person.... Except the current administration uses them as an unofficial censorship arm of the government.

Actually, a lot of people blindly trust. It’s so mind boggling. I got into it, on Facebook (don’t hate, use as rarely as possible) when the President’s accounts got banned. They were saying he needed to be held to account for what he was saying. It devolved into me censoring myself because fact checkers and the need to keep my account. But I said I was censoring myself for this reason highlighting why free speech is so important and how it hinders real conversation without it. I also asked how can you trust people you don’t know to overcome their own biases and look at information fairly. And they’re not even trusting Facebook employees because Facebook farms it out to a third party company. Do they know which?

Anyways, I basically opted out of the conversation after that.

I had to laugh as I do agree with the judge. Except he should be impeached for using this context knowingly in error, or for gross incompetence. I'd like to see his tax returns for the next five years as well.

As we’ve learned with the 2A, having lots of ammunition is pointless unless you’re able to remove enemies with it

Unless your willing to use it.

I sited the cdc to management yesterday and got a fact check email in return.

I work for the federal government. Hahahahahha

You couldn't pay me to go anywhere near that ceasepool.

And what's with this sticky for a repost from yesterday?

Not everybody sees everything at once, pede

I despise it. But only some are awarded (or cursed) with the thinking that makes them question everything.

It is honestly imperative that people stay on these sites to wake others up, and provide answers to their questions when nothing else makes sense.

By "these sites," I hope you mean Patriots.win and not Facebook. If you have a FB account, you're part of the problem.

I think you missed the whole point of his comment

I assume he meant "it's imperative people stay on Facebook."

Facebook operates from a position of power solely because of their userbase. If that goes, so does their authority and control. This is a common problem in tech. Better platforms can exist, but if people can't be convinced to migrate, the dinosaur will always rule.

No. That’s not what I mean. You are projecting your intelligence onto everyone else, and it will backfire.

Play it forward, see where it lands

Word. Haven't been there since the 4th of July

I'm sick of the BS. Only reason people have it is to keep in touch with other people. How about life isn't a social dick sucking contest. Drop the social media and your life will improve 100%

I agree, but you also have to admit social media has become extremely important as advertising for local business and independent careers. Not saying you can’t succeed without it, but it’s become the main catalyst for consumers.

you can have a business page without a real personal page. Just make a place holder with no friends or news feed to manage it

That has nothing to do with the state merging with these cartels. Not one thing. Even if it did this is a matter of national security. I can spin out advertisements for local businesses all day through many mediums. A monopoly party does not have the right to groom children and subvert elections because of local businesses. Local advertisement does not require these monopolies to exist.

"To keep in touch with people"

It was called the phone book when I was young.

Come to think of it, never had a black pages....

be best if it redirected to the Spiderman impersonator meme, then loops to infinity.

Clown world has no peak.

the logical progression will result in FB blocking FB links.

Fauci from one month ago would be considered a dangerous conspiracy theorist today for holding the same medical opinions.

Welcome to every month with Fauci.

And then it implodes.

So it really is getting worse... Johns Hopkins was "false" last week. https://patriots.win/p/12jcXxxiz2/ha-johns-hopkins-university-now-/c/

DARPA uses tax $ to make Lifelog. Gives it to Cyborg/Android Zuckerfuck and fabricates a cool startup story and calls it Fuckbook. Immediately it's given to the UN and now it's bigger than any government.

The UN was created by the Rockefeller Foundation to eventually create a one world government. Sad.

they inflate their user numbers

So CDC guidelines are shit because the CDC is false information

Centers for Disinformation and Control

What was the original link? I can’t easily copy it on my phone but want to show a few people. I know some normies that would benefit from knowing this.

link seems to be working just fine. Havent been flagged yet.

It's only when posted to facebook that it gets fact checked

Right, I did and it hasn't been flagged yet.

Thanks for the feedback. I would have looked stupid if it hadn’t been flagged when I said it would.

My guess is that Facebook is hitting every post that includes that link, not because the information at that page is false (it’s not) but because so many posts referencing it are crap and their algorithms aren’t able to pick out the non-crap.

Yup, took my lefty sister a few days to get back to me about that cdc link. They had to wait on their masters to tell them how to reply.

Years ago she replied to a debate we were having with an obvious copy and paste. From then on I knew she had no independent thought.

Cool. I can tell the Pfizer and Moderna jabbers I have allergies including one to sucrose (ingredient).

Maybe I'll tell J&J I identify as a chest-feeding male and am planning on becoming pregnant.

Somebody is doing God's work...

They have been doing this forever now, I have been flagged several times for linking to the CDC's own site! And they also flag obvious jokes now, it's really comical...

They finally got one right. Anything coming directly from the government is disinformation.

I can confirm - posted the same link and it was flagged as false information - it's a decent 'red-pill' to post the link from the CDC and let the Fact Checkers question the CDC.

Do NOT upvote this. Delete your fakebook account NOW to save your freedoms. If you have FAKEBOOK you are part of the problem by making zuckerfag RICH.... I know I know.. cucks be like... BuT Muh gRAnBaYbaY PiC on thErE! Idiots.

We've always been at war with Eastasia.

FB has been doing it since last year. I had my FB account frozen last year because I posted a screenshot from the CDC's website about the Covid death rates.

Not that hard - just the first couple of days.

Find alternatives and never look back.

Finally the fact checkers are doing their job! Bravo!

Big tech is out of control. Faggotberg needs to be beheaded by a peaceful somali

Well to be fair, the CDC is in fact false information. Lol

For once they're right lol

Well, they've got a point, the CDC has been full of shit this year.

No they aren't. Someone just 'shopped that.

Tried sending a link from here on Messenger yesterday, failed each time and auto deleted on my end. Fuck Facebook!

Probably just trying to establish global entities like The WHO as the ultimate authority.

To be fair, the test are false information.

Now THIS is how you flex. Don't fuck with the Zuck.

When did the CDC start making laws on evictions? Who gave them the power?

Well, there not wrong

it is over for the gov. the collapse is happening before our eyes, the battle for truth will only intensify now, and it is incumbent on all of us to push forward, double down our efforts in revealing the truth about the death jab, and the fake presidency.

Who watches the watchmen?