TheDonald
Communities Topics Log In Sign Up
Sign In
Hot
All Posts
Settings
Win uses cookies, which are essential for the site to function. We don't want your data, nor do we share it with anyone. I accept.
DEFAULT COMMUNITIES • All General AskWin Funny Technology Animals Sports Gaming DIY Health Positive Privacy
1263 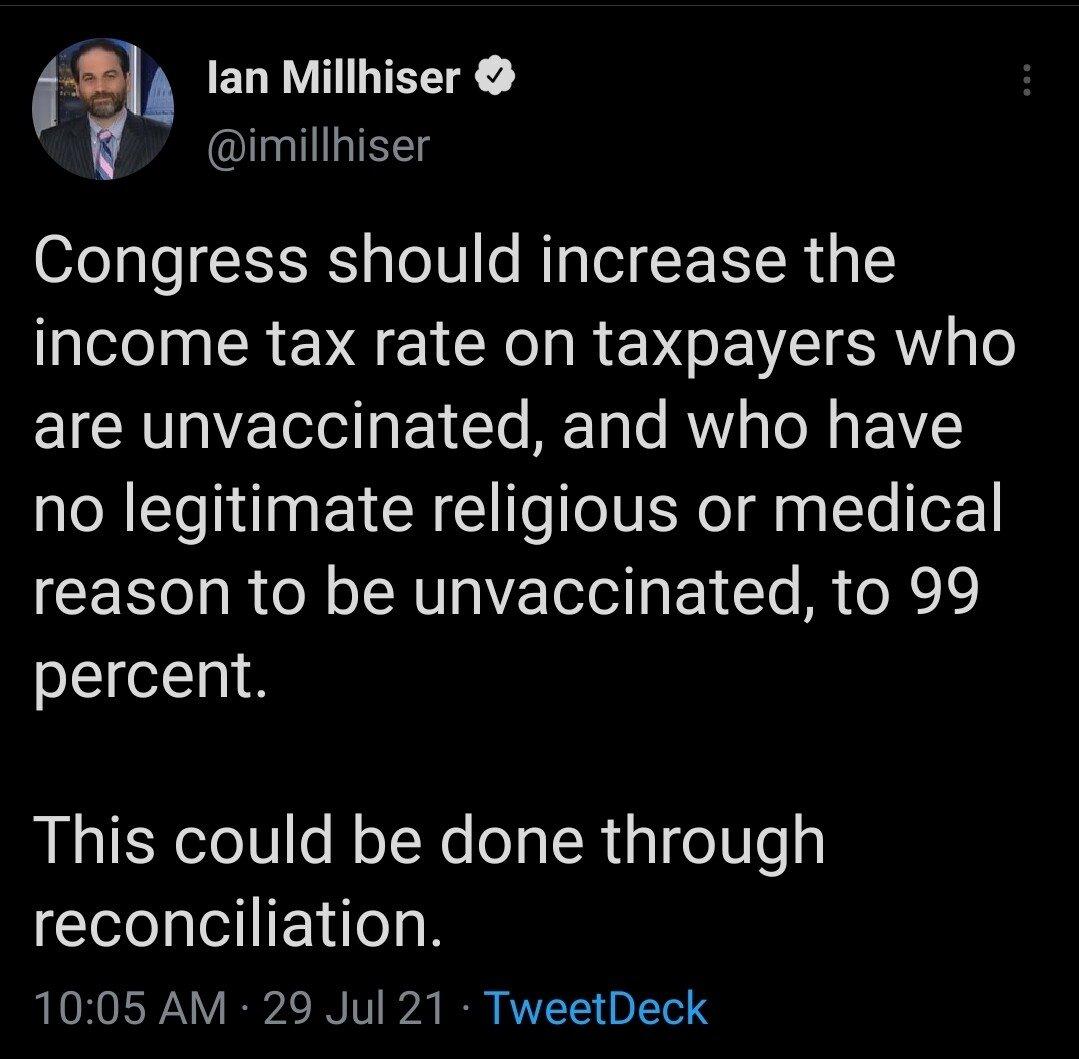 I'm starting a list of those pushing forced medical experiments on us. Please help me add to the list. These people are pushing for crimes against humanity and when we win, we must remove these people from society and charge them appropriately.

The entire UN, WHO, and all world leaders who go along with the tax (the ones who didn't were recently murdered). https://rumble.com/vkg4b9-who-whistleblower-connects-the-dots.html

we need to finish the wall so we have one long enough.

The big risk of doing this is it might encourage a few lone wolves to murder them and post it online.

If I lose my Job and my house, the only thing I will have left are my guns and bullets. I am only one of millions. These people should be very careful.

They'll call you a terrorist if you ever dare to use them on a vaxxed. Do you not know that being called a terrorist is one of the worst things that can happen to someone.

one mans "terrorist" is another mans "freedom fighter"

Can't call someone a terrorist if you're dead.

Man and I was so devastated when random people called me a racist then a nazi now I am a terrorist. Nice by the time I'm 80 I'll be everything and still give no shits. Too bad I highly doubt my vaccinated peers will see their 80s

This "reconciliation" abuse of the legislative process has really gotten out of hand.

If they make it impossible for people to purchase groceries without a vaccine and I promise you deliveries to stores will stop arriving at their destinations intact.

I have a keen understanding of the shipping industry. I'll use it to feed my family.

Whats scary is, they may be planning on this.

Soros is betting against the dollar. Soros politicians are pushing us.

And eventually the deliveries will just stop all together when semi drivers decide it's not worth the risk of death.

I know a lot of people are sceptical of Bitcoin

But day by day it’s looking like the life raft out of this tyranny.

If the base of the pyramid propping these tyrants up decide to leave them for something that they cannot seize and they cannot control without destroying their own stupid financial system of debt and control, it’s over.

bitcoin isn't secure, it is tracked by the gov has been for a long time.

Germany taught these bitcoin idiots nothing.

Nobody cares, just don't come crying to me one day crying your sheckles are worthless.

Are you the official crybaby concierge? Nobody is crying to you silly rabbit.

No, centralised intermediaries have been. Bitcoin itself is still operable securely.

Its all public dude all transactions are public, that is how the IRS is catching people. you can think you are "safe" and "secure" and go ahead and use it, but don't be shocked when the IRS is knocking the door down cause you didn't pay taxes on it.

Only thing that appears to be mostly secure is monero, and that is due to how it signs transactions. and even then I wouldn't really put faith in it, you know why? take the net down and all them fraudcoins are worthless.

But it’s not Bitcoin causing that. It’s the centralised gate keepers that report back to the IRS causing that.

Depending on how many and how far people were to go with their decision to no longer feed the machine that hates them, the fact that they can’t seize it or prevent its use does allow for an eventual “so what, tell someone who cares” response

But take the net down, we have bigger problems frankly. Even the existing monetary system would have serious problems “cashless!” remember

They already know whos wallets are whos, I got a friend who has a small bit of it from when he mined it some time ago. he is now getting audited. he has never transacted with them he just held them in his wallet, but IRS knew exactly how much he had. So scamcoin was broken long ago.

Monero is the only one I would bother with since ALL transactions are signed by many thus extremely hard to track back but still not worth it. cause when shit goes down all that internet fad coin will be useless. If you can't hold it in your hand it is worthless.

And you think these satanist fucks won't take the net down? I expect that to happen any time now. my guess is as soon as they can't prop the phony markets up anymore with printer money you see the net get shutoff, or if they realize they are losing the narrative the net will drop.

Lol. Fantastic. No need to work anymore. So something like 50 million productive Americans will quit their jobs. I'm sure that won't lead to the collapse of society.

The most productive Americans are also the best armed. Should be fun.

I think they have forgotten who in the country has the guns. If you take away peoples livelihoods they have nothing left to lose. This will be a quick coup.

I suggest everyone stop paying taxes but I'm sure no one will stop. Cuckservatives have to follow the rules

who have no legitimate religious or medical reason to be unvaccinated

Fuck you! I'm currently going through some serious neurological & cardiovascular issues. You (with no medical degree) are telling me I NEED to get vaxx'd risking my current health issues spiralling down. My neurologist told me to avoid to vaxx atleast until I can get my other issues under control.

Medical tyranny. I really hate these people. I'm so tired of these people who think everyone can fit in a box.

We're way past fighting words. I'm waiting for the fight now. No going back.

Opinions are like assholes everyone has one, except this dude he has two the other one is on his face and he talks out of it! 🖕🏻

Assholes just want to shit all over everything..

Now Pussies don't like dicks. Because Pussies get fucked by dicks.

But dicks also fuck Assholes, Chuck. And if they didn't... then you'd have your dicks and your pussies all covered in shit!

This is how Nazi Germany started...

Our buddy Ian's twitter profile says he works at Vox: Senior Correspondent, Vox. I blame James Madison. Author of The Agenda: How a Republican Supreme Court is Reshaping America

What a piece of shit.

99% hahaha also what's a "legitimate religious" reason? I suspect he means certain religions don't have to worry about it.

try it faggot. Try it.

What about the unvaxx'd but the natural immunity due to recovering from COVID? I still haven't been convinced that people who legitimately got COVID and recovered need the vax.

The MSM/Gov are giving no leeway to those who have natural immunity. It's only polarizing "vax/no-vax".

I stopped paying when they stopped counting my vote. I don't give a shit if it is 140%

Does this guy not realize when you take 99% of something (or more than you do now for that matter) the 1% we would have gotten isn't worth the work.

Even easier to just steal from the vaxxers.

Who the fuck is this idiot? Def a commie by the Twatter blue check.

Congress should raise the tax rate on baby murdering people that have had an abortion to 200%. At least my immoral bill demands have actual moral grounding to them. Ian Millhiser is just a cunt.

Tough talk for someone in Louis XVI distance

147gr JHP by the thousands says you won't.

Or how about someone throw Ian Millhiser in front of a bus, LOL

Who is this faggot and why is he not dictator of the world yet?

There is no vaccine.

That's fine. Because it just seems like at that point that probably 100 million very well armed Americans start a vaccination program of their own pursuant to the charter of the nation, the declaration of Independence. I am not advocating it. I would just be shocked if it didn't happen.

Well, that's going to put a lot of working poor of all races right in the shitter.

I know this won't be popular, but I'm going to say it anyway. There is no compromise with these animals. They must be defeated in the most brutal manner possible, broken, and tossed into a large structure that gets incredibly hot. Fuck these war criminals.

They probably want the right to set their own bedtimes, too.