TheDonald
Communities Topics Log In Sign Up
Sign In
Hot
All Posts
Settings
Win uses cookies, which are essential for the site to function. We don't want your data, nor do we share it with anyone. I accept.
DEFAULT COMMUNITIES • All General AskWin Funny Technology Animals Sports Gaming DIY Health Positive Privacy
1530 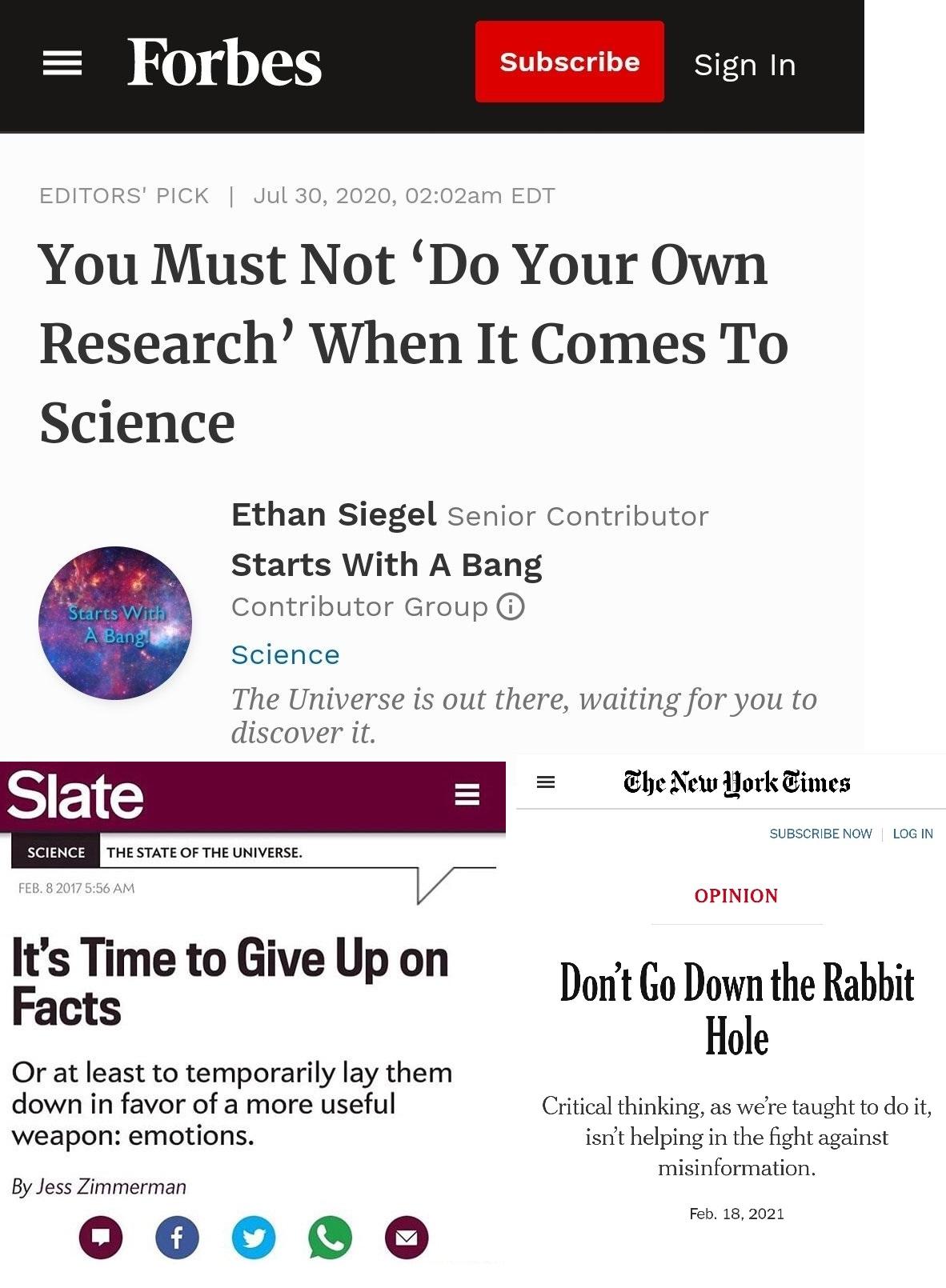 And if you show this to at least 50% of the population they have no clue how to think about it because they never did any critical thinking in their life. Most of these people just parrot back what they have been told from cradle to grave. Want to know the real sickness its compliance.

This is one of the issues I'm having here in Korea. Trying to teach these kids but they can't critically think. They believe everything their parents or the news says.

For example, virtually everyone here believes playing basketball will make them tall, so kids' parents sign them up for it despite them not enjoying it. There is no critical thinking here. They don't ask "Why?" I can't even get into vaccines with my students because "that's not what their parents say."

This is what "technocrats" want, you to just do what they say because they are the "experts"

And tons of low self-esteem. “I didn’t go to Harvard, they did… I’d better listen to the smart people and stop thinking I can think for myself”

These are the priests of the 16th century figuring out that the printing press has caused people to investigate things themselves.

We’re finally starting to see the difference between “science” and “political science”.

It's Time to Give Up on Facts

Or at least to temporarily lay them down in favor of a more useful weapon: emotions.

I know this is what we see from the masses, but to actually put this in print (if it is real) is bold.

Edit: Looked it up, it is real. It is archived, but it is unreadable gibberish, not worth it -> https://archive.is/ckmkl

It is gibberish but holy shit the irony:

If someone says that the Muslim ban is OK because all terrorists are Muslim, it might be more worth it to ask about his or her fear of terrorism than to rail against the falsehood about terrorists. That can yield a more useful conversation. What’s really going to make them safer? How much safety is really possible, and what are we willing to trade for it?

That is a startling point full of irony and hypocrisy (not to mention it's own falsehood by labeling it a "Muslim ban"). Wow.

The fuck? Holy shit, stupid has entered the terminal phase.

You know, the irony is that people wouldn't have to "go down the rabbit hole" so often if the media didn't lie about every single fucking thing. There's several conspiracy theories out there that are just silly, but I don't really see the problem with those who buy in to those things. The reason people buy in to those things, largely the people who look at the media and think there must be a conspiracy, is because you just can't trust the media at all. It's nearly impossible to tell what is the truth of situations when nearly everything the media puts out is, at best, slanted towards a particular side and an out right fabrication at worst.

In Atlas Shrugged, there is a pseudo intellectual Dr. Ferris who writes a book "Why Do You Think You Think?" dedicated to telling people their attempt use their rational facilities is pointless. To paraphrase the book, Zimmerman sounds like his 'brain-brother'.

No.i refuse to believe the Slate article is real.are they seriously saying that you shouldn't think just feel?

I remember being a kid and doing some original research instead of looking for enough citations to fill a research paper. The teacher was upset and wanted to fail me. They don’t like it.

CNN: Thinking will give you covid.

In that case, I'm going to use my emotions to guide me. An emotional distrust for authority.

"We should not translate the Bible into vulgar English. It is too hard for the layperson to understand. The word of God must only be interpreted by the priesthood."

It's time to give up on facts. Or at least to temporarily lay them down in favor of a more useful weapon: emotions.

There are exceptions such as the awesome last pedes around here but overall this holds true.

Well if we want to play the emotional game then if I feel someone is trying to emotionally manipulate me into the getting the vax, it's a pretty good sign they are not thinking in my best interest cause they won't bother to give me the facts.