TheDonald
Communities Topics Log In Sign Up
Sign In
Hot
All Posts
Settings
Win uses cookies, which are essential for the site to function. We don't want your data, nor do we share it with anyone. I accept.
DEFAULT COMMUNITIES • All General AskWin Funny Technology Animals Sports Gaming DIY Health Positive Privacy
1217 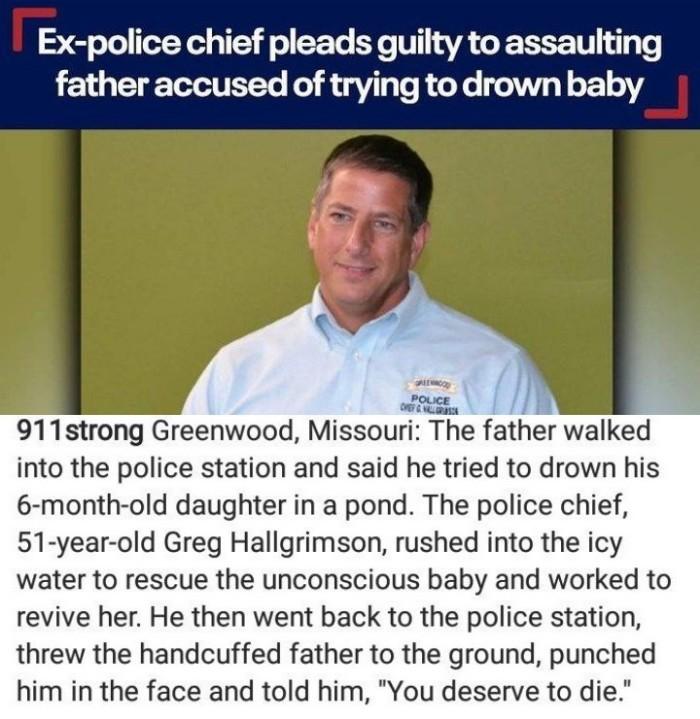 I mean if he punched a guy that’s illegal.

If he was arresting him and claimed the dad was resisting, which meant he had to get rough, that would be different.

I’d say his sentence is 10 seconds of community service, and the court will accept the 10 seconds he took to beat the guy up as time already served.

I have no problems with those who would murder children having the shit kicked out of them. By anyone.

I’d like to buy that chief a steak dinner. Good for him.

I am confused, why would this ex police chief plead guilty to community service?

Put me on that bench.

Teacher here. I will definitely bring it up this year.

That sperm donor should have been hung by those handcuffs in front of the courthouse for everyone to take a swing.

In the new world I'm looking to create, this man would have a parade

Sign me up to live in your world please fren

I don't know for sure. It sounds from what I've read that the defense cannot inform the jury that they can nullify. As a juror, if I wanted to acquit someone, I would NOT say "we are nullifying the law". I would simply acquit and stfu.

That's happened in the past, yes.

This is the best video I've ever seen about the subject https://www.youtube.com/watch?v=uqH_Y1TupoQ

He should be given public service. Put him on a parade float and drive him down main street as a hero.

Why are you calling this guy a suspect?

Man walks into police station. He admits to drowning his child. Child then found in icy water. People that actually give a shit are placed in danger by going into icy water to try and save her.

Stop with the bullshit due process virtue signaling.

THIS is the blue I back

fuck you - I didnt say that

What I did say was "Fuck you", go put words in someone else's mouth what knda a-hole equates the protestors with a child killer

I back THIS guy for administering a beating to THIS particular POS who tried to drown a child.

Try to keep up if you can, or go back to your antifa friends

I'm sure you would think different if this was your kid or a family member of yours, but you keep pushing your holier than thou persona while your country slips away. We are in a post constitutional America in case you haven't noticed. The old rules dont apply. The faster you wake up to these facts the faster we get our country back

But this case never involved a jury.

I don’t see a crime

Guilty of doing what is right!!!

Every time I get jury duty I hope I get picked for a case like this.

I see the prosecutors snapped into action.

i lived in greenwood for a few years about 12 years ago. super exciting small town lol

it is full of really friendly people though, just a nice little small town.

though the police department did have some issues over the years with giving out wayyyyy too many tickets. like, all the tickets, for nearly nothing. if you were going 1mph over, or .5mph over they would pull you over and ticket you. no seat belt? ticket. a 16yo driving after 10pm? ticket for breaking curfew (they tried to get me with that when i was 17 with a 16yo friend literally driving from his parents to mine which happened to be on opposite sides of greenwood. headlights not a temperature they like? ticket. it was ridiculous. i believe some fed group came in and audited the place and they were forced to back off or something actually, in late 90s/early 2000s maybe. was just one of those places that needed revenue and decided to ticket every single car/person they could.

Greg is a hero though. slap his wrist for punching the piece of shit attempted murderer and then buy him some beers or whatever his drink of choice is.