TheDonald
Communities Topics Log In Sign Up
Sign In
Hot
All Posts
Settings
Win uses cookies, which are essential for the site to function. We don't want your data, nor do we share it with anyone. I accept.
DEFAULT COMMUNITIES • All General AskWin Funny Technology Animals Sports Gaming DIY Health Positive Privacy
672 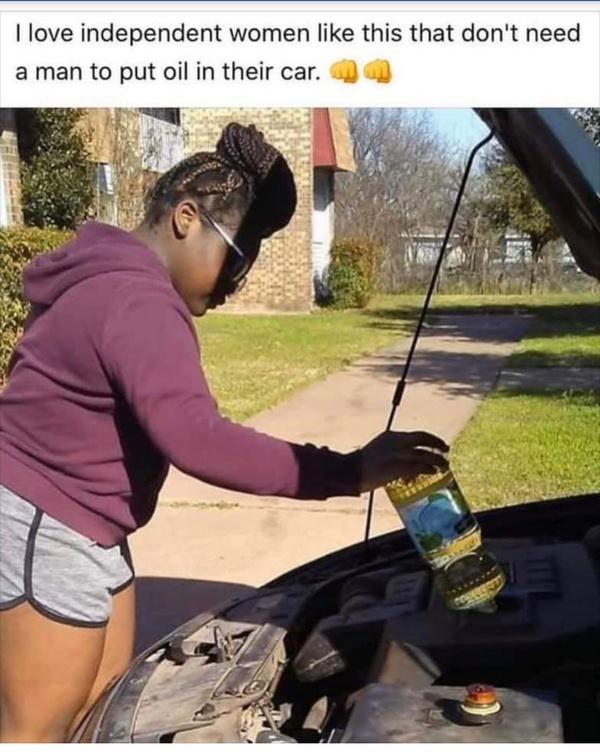 Maybe it is a diesel that has been converted to run on the frying oil from the restaurants?

Supposedly those automobiles are great, the exhaust smells like fries and fish and onion rings.

Small engine dude on YouTube? I seen that guy use syrup before and it worked. Hahahah

You see the Russian guy trying to kill a Lada with all kinds of crap in the engine, damn thing kept going and going, it was hilarious. I think he even put eggs in. Made me want a Lada.

No, haven't seen that, now I have to search that commie site to find it...hahahah

Hahahah thanks man! Fckin cracked me up

That is hilarious, thanks!!!

Would be nice since that was the initial use of that crap till they said eat it instead.

Just how bad would that actually be?

(Other stupid one was, to be brief, his exhaust was plugged with snow, I suggest he unblock it. He says that the exhaust will melt the snow, 2 hours later they are scraping the remains of his melted car in a parking lot)

Oil properties are scored on the ability to maintain viscosity ("thicknesses") over a given temp range (5w30, 5w20 etc). Part of the specs that define a proper oil for an application are also based on the shear factor (how quickly the long chains of hydrocarbons l will maintain integrity).

How bad is this? Well that oil will instantly shear which = metal on metal contact (bearings, oil control ringa) = that engine fucked within a couple minutes.

Thanks, that is what I was expecting.

Wasn't sure if it was one where it would burn and smoke and generally perform poorly to, as noted, a condition that would pretty quickly seize the engine.

Bonus to her, probably didn't drain the oil that was in it so the failure might not be so instant.

The cap is still on.

Ahh yes. The upside down bottle of cooking oil that is completely full.

I heard they oiled planes with hemp oil in world war 2.

Did it allow them to get higher?

I see what you did there.

Dilate and neck yourself faggot.

Need some ice for that melty?

Take your fucking AI click bait shit and get it the fuck off a non-stop TRUMP rally website you stupid fucking brainlette midwit ass felching degenerate.

Rev up your deep fryers!

He used to have a sign above his garage that said "Live Free or Die". I figured he always was based.

Is this the poster for The Bell Curve movie?

Need an update as to how long it lasted. Any guess's?

Tldr: they're all dumb as hell

You only get a "fist bump" if this dumbass removes the foil seal on that bottle.

That's obviously a diesel that she all by herself converted to burning cooking oil. She had to relocate the fuel tank and thus the filler because of the complexity of the emission reduction and purification device of her own design that she installed in their place.