TheDonald
Communities Topics Log In Sign Up
Sign In
Hot
All Posts
Settings
Win uses cookies, which are essential for the site to function. We don't want your data, nor do we share it with anyone. I accept.
DEFAULT COMMUNITIES • All General AskWin Funny Technology Animals Sports Gaming DIY Health Positive Privacy
3528 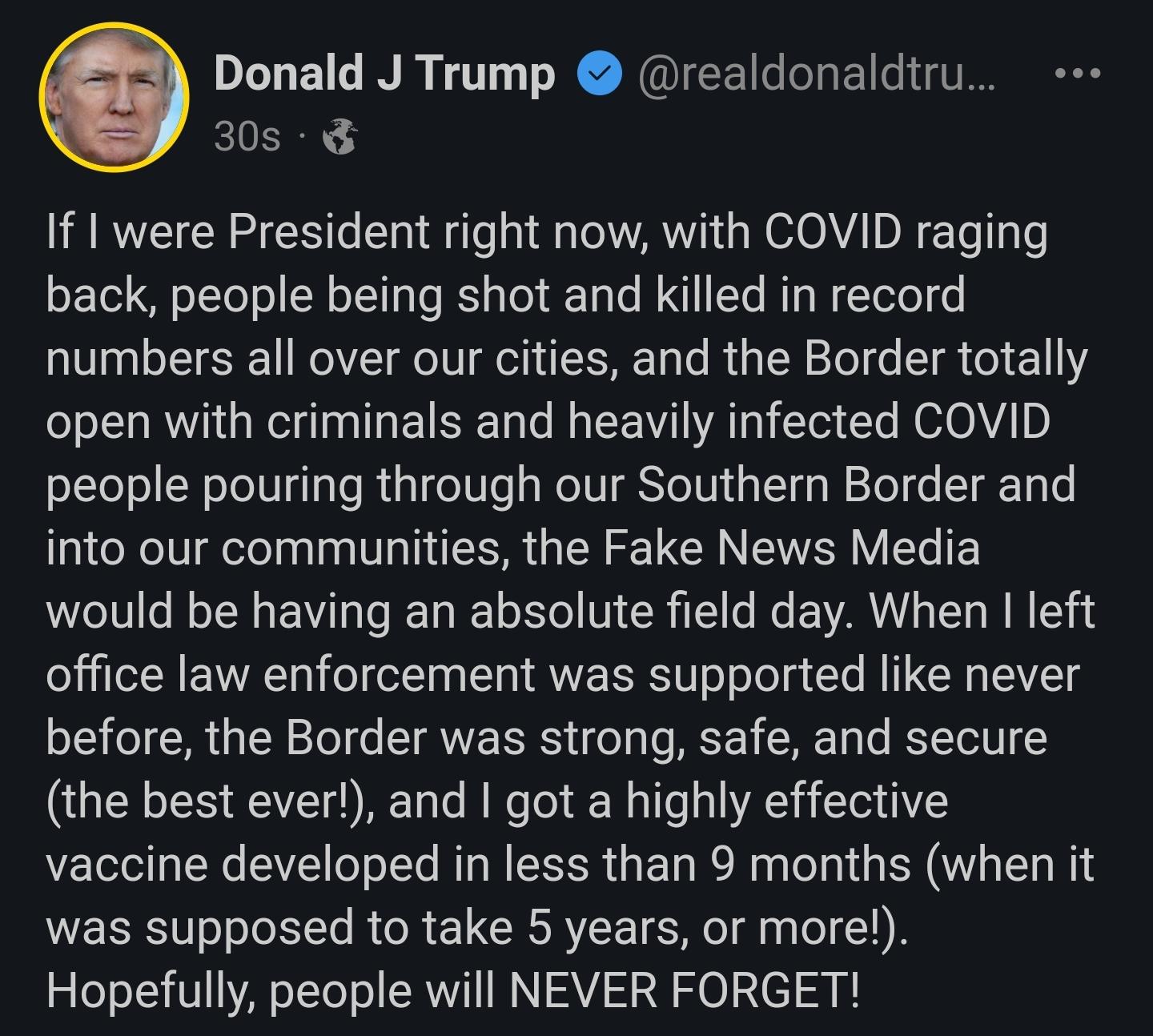 That’s one of Trump’s flaws... he’s too competitive. I will support him regardless, because he is light years better than those swamp monsters, but he needs to drop the vaccine BS.

I would say his competitive nature is generally a bigger boon to Trump than a flaw, but in this case it is definitely working against him imo

I agree, but he needs to know that many of his supporters don’t like it and he needs to take a step back. I appreciate he said this cannot be mandated and is a choice, though.

He originally called it all a hoax. The media smashed him for it.

During the first corona virus task force updates he mentioned it was about trafficking. Media crickets.

He touted hydroxychloroquine Media smashed him for it. We need a vaccine.

He plays the cards. makes warp speed. Removes liability. Gave the media and subsequently the general public what they demanded. Media pivots to how bad he is at distribution.

Wears no mask the whole time. Remember he called it a hoax.

Warp speed skipped trials, got the vaccine out before it could be mandated. Which got the ball rolling on vaccine complications. Now complications are out in public on the net before it’s mandated.

These people were going to take the vaccine anyway. Any vaccine. Any time. Any problem. The media made them demand it. Hell, it wasn’t fast enough for them as it is. They want us all jabbed. Nothing he would have said would have changed the media’s influence on their brain. They hated him to the core. Lost forever.

That's the important thing. He has never once tried to push or force anyone to get it.

Yep, he's too much of a braggart and too competitive. He continues to use the vaccine to brag about himself.

Before people get their panties in the wad, I still support Trump and think he was one of the greatest modern Presidents that we have. But he does have several flaws and has made mistakes. No man is perfect.

he cut through bureaucracy and accomplished what they said could never be done. also funded therapeutics which are ignored. he could pivot but no..

Well, if he mentioned ivermectin like HCQ the media would have demonized it a lot more than what it is now...

They're going hard in the paint as it is;; gotta protect that Pfizermectin.

warp speed was an achievement. he will never get credit for it though. he coyld be touting therapeutics (did once) but is tsking a boomer faucian view on vax which is decreasing in popularity and in the event of disaster orange man will be blamed. suck a rhino