TheDonald
Communities Topics Log In Sign Up
Sign In
Hot
All Posts
Settings
Win uses cookies, which are essential for the site to function. We don't want your data, nor do we share it with anyone. I accept.
DEFAULT COMMUNITIES • All General AskWin Funny Technology Animals Sports Gaming DIY Health Positive Privacy
2626 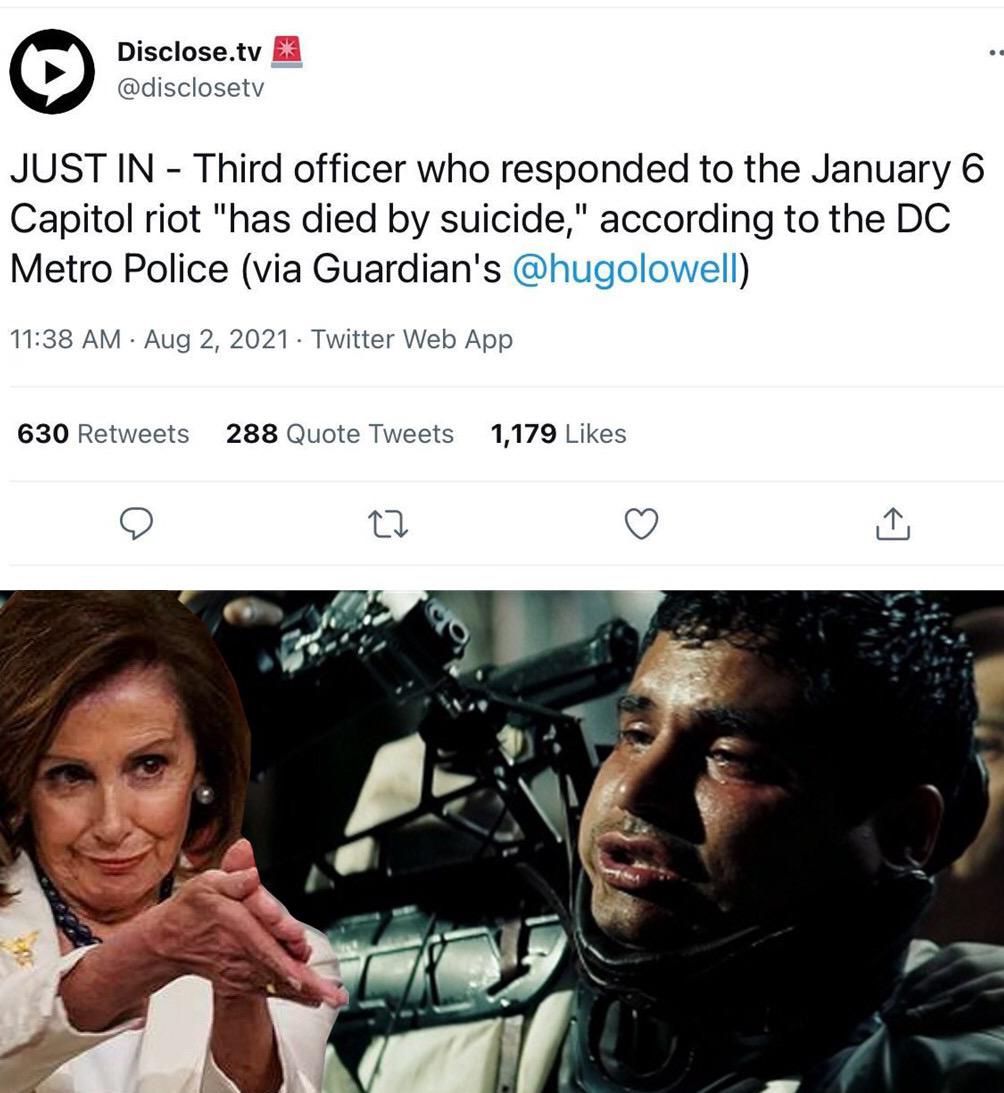 I bet the ones who testified during the J6 commission did so because they feared for their lives.

This guy probably killed himself out of shame for what they are doing and how they are framing something they know for a fact wasnt an "insurrection".

MY THOUGHTS EXACTLY !!!!!!!!!!!!!!!!!! Funny how NO article says HOW the suicide happened? gunshot? overdose??? There should be a new catagory on the death certificate: SUICIDE BY POLITICS

He shot himself in the head.....Twice!

Actually from the picture it looks like his "NECK was stretched" but it would be racist to use a rope??

Me too, and add in the whole "Justice" system.

That, and about a 2 billion dollar budget bump

Some people never miss a chance to blame dA jOoS!

He doesn't know/care about the Dalessandro family.

Why the spin? She's literally Italian. If we're going with stereotypes, we might as well use the correct one.

Man, they're doing s full court press on this. They're wanting the sheep to believe the Jan 6th party was the so bad mentally to the officers they're slowly taking them out one by one... Man, if any of those officers have any dignity left, they better come forward before they suicide themselves by 2 in the back of the head.

Have to paint scenario more bad than it was in order to further agenda. Our government hates us

OKAY, NOW THIS IS FUCKED.

Have you ever had 3 Suicides at your company within a 6 month period? The job isn’t that damn stressful, most of the year they are giving directions to the bathroom.

Massive Coverup... definitely do not believe the official story.... either they never existed... they are still alive. They were murdered , or anything else...

But lightening doesn't strike 3 times in one place.... somethings up!

Same thing at NYPD when they got a hold of Anthony Weiner's laptop. Next thing you know 6 of them killed themselves.

In that case, with what was suspect to on that laptop, it could have really screwed with ones psych. But yeah, not suicide.

Yeah, so stressful from all muh "white supremacists" 😅. In all seriousness though, would love to actually see concrete evidence so whoever is responsible for these "suicides" sees some sort of justice.

Now??? Stop smelling your own farts and wake up!

No not now but everything gets more and more fucked and nothing gets organized and nobody does anything. Please tell me, when is enough enough?

Literally don't believe they committed suicide. That event was hardly troubling. They are assassinating witnesses.

At this point, you just have to laugh.

So you don't cry!

Wait, did a Capitol police officer actually say they had dirt on Pelosi or is that just highly probable speculation? If they did, link pls

Its the honest meme for a title I am sure. It is obviously suspect when a person in a high profile event dies, so "suicide" is a suspect thing.

Oh I have no doubt this is a strong possibility but I was just wondering if I had missed some news.

It's just a meme, usually it goes "I have information that will lead to the conviction of Hillary Clinton" whenever someone does suspiciously or has an unlikely suicide.

I'll bet he had a conscience and would not testify in a manner that backed up the false testimony of the others....

I wouldn't be surprised if they really did kill themselves. They're being told, or most likely ordered, to lie. They saw what happened, they watched it unfold. They know the truth. They know innocent Americans are being held in horrible conditions and abused and they know they're playing a part in it. They are seeing how corrupt everyone above them is, from their bosses right up to the president.

Maybe they aren't being suicided, maybe they're feeling like traitors knowing they're protecting people who stole an election and locking up innocent people.

These people are the same guys who were on trial after ww2 for war crimes. It has to be rough knowing you're selling your soul for a paycheck.

Good, i dont care how bad he felt. The only downside is we didnt get to hang him.

Why does this kind of shit keep happening with zero consequences for the killers?

Another great American killed by evil assholes I guess, just a normal day for us.

Because America is a garbage system -- it's a dictatorship, and every 'department' is run like a dictatorship, ... command hierarchy, so the bosses control the 99.99999% of everyone else. The only way a society can sustain is if it's a fair majority ruled republic -- every decision must be approved by the supermajority (at least 75% to be fair). Crooks infiltrated everything, and they control the money system too -- that's actually how they infiltrated everything in the first place. The money system has been corrupt for eons. We are all in a pickle now. But we can change things, we just need to reorganize so that the people all work together in unison... but most ppl don't understand how and keep trying to work within the broken America... soooo we'll see if there's any leadership... there'll probably be very little, sadly. Where's the local groups? None in my state. No leadership, just mouse people that squeak to each other and never realize they need to unite entire multi-county regions, not have tiny little 10-20 person groups. If/when the ppl start organazing better, they can hire any/all deputies/officers to work for them instead (with a better FMR corruption-proof police service), so we ppl can drain all the personnel out of the corrupt police institutions.

I'm pretty sure the Clintons are involved somehow..

From the movie Shooter. Really makes you think about what's going on today.

Just wanted people to know where to look for the movie 😅 Fixed!

Is this real? I mean, it can’t be any more obvious, wtf!

The one that had the information suicided?

There probably were some percent of officers under the naïve illusion that they were the good guys working for the good guys, who had their worldview upended by the aftermath of 6 Jan. They are psycologically at sea without a paddle and no one they can turn to for help; being depressed, trapped in their job, isolated, and alone leads to higher rates of suicide.

There should be a public effort by someone Braynard(?) to offer a confidential outlet and help for Capitol police whistleblowers. We need their stories public.

We could use ol Bob Lee Swagger about now.

He could not handle the real truth that it was a set up and he did not want to go along with it any more. Was going to spill the beans on the whole thing So he was killed by the DS in a suicide 🤔. That is the real story.

When you can't live with the truth!

They knew too much

The SS couldn't overtake the SA until the Night of the Long Knives . . .

Yeah, they all knew that they were setup and used against their country. They see people imprisoned in solitary confinement without due process. They see the Democrats invoking the day they orchestrated again Americans. These guys sat at home knowing it’s all a lie, they honestly probably showed up to just stand by some barricades knowing actual Trump supporters wouldn’t do shit…until their own “brothers in arms” turned out to be rats and let in antifa and the FBI… so these innocent people stepped aside while outnumbered 200-1. Not really worried, because people were literally thanking them as they entered the fucking capital with their selfie sticks and flags.

Then they slowly found out the truth of what really happened among themselves, and knew that if they spoke up, they’d be killed anyway. God bless them and their families.

How many Portland, OR. officers have committed suicide ? Now they were under a real attack.

So far 4 officers have died by suicide. The Capitol Police have 2300 members (I don't know how many were deployed January 6th so if someone has this info please provide it). In 2019, 288 police officers died via suicide out of around 800,000 total officers in the US. This was considered an especially high number. That is still 5 times fewer deaths via suicide proportionally than the Capitol Police suicides even when counting the total 2300 officers, not the amount actually deployed on January 6th. Could be statistical variance but it's highly suspicious.

Now do the NYPD who viewed Anthony Weiner's laptop. 6 commited suicide from the department.

That department has 35,000 officers so statistically speaking, 6 suicides is in line with the national numbers. The capital police numbers are far more suspicious and it hasn't even been a full year yet

35,000 officers for the Capitol. What a waste of fucking money.

I was there. We were clearly unprepared for an “insurrection”. The Capitol Police and the National Guard were well armed and we were not. We got in the face of Capitol Police but it was clear they were waiting for a signal. And then they got the word, they immediately began launching rubber bullets and tear gas into the crowd.

These cops must have been the biggest pussies ever. I've never seen cops cry in court like that, and i've never seen cops commit suicide over a minor altercation with a group of people. Holy fuck this stinks of "this cop wouldn't cooperate with the false flag so cut him loose"

The following days, I suspected that the "suicides" were a result of them treating to expose someone due to Ashley's death. They probably knew who the undercover feds were, and after seeing the footage they realized that someone died because of mean tweets.

Despite J-6 being a shit show, that should have been a walk in the park coming of of the summer of love

I always think of this scene when I hear FBI and now capital police.

Misleading title that makes people think he actually said that in the past...

ahh so that was their method of getting cry babies suicide or tell them what we want you to say.

Let's do a little research and math.

There are 2,300 in the entire capitol police force. There have been 3 suicides since.

Edit: With the fourth that comes to 6.2 times the annual suicide rate of vets, over 8 months instead of a year.

I hate math!!! Thanks for being math guy!

Was this the gent they just reported the “suicide” on? Yes, we are at #4 now.

Just made this meme this morning and it’s already outdated.